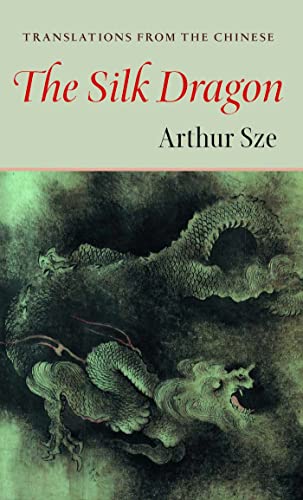 The silk dragon : translations from the Chinese

Arthur Sze has rare qualifications when it comes to translating Chinese: he is an award-winning poet who was raised in both languages. A second-generation Chinese-American, Sze has gathered over 70 poems by poets who have had a profound effect on Chinese culture, American poetics and Sze's own maturation as an artist. Also included is an informative insightful essay on the methods and processes involved in translating ideogrammic poetry. MOONLIGHT NIGHT by Tu Fu can only look out alone at the moon. From Ch'ang-an I pity my children who cannot yet remember or understand. Her hair is damp in the fragrant mist. Her arms are cold in the clear light. When will we lean beside the window and the moon shine on our dried tears? Sze's anthology features poets who have become literary icons to generations of Chinese readers and scholars. Included are the poems of the great, rarely translated female poet Li Ching Chao alongside the remorseful exile poems of Su Tung-p'o. This book will prove a necessary and insightful addition to the library of any reader of poetry in translation. The poets include: T'ao Ch'ien Wang Han Wang Wei Li Po Tu Fu Po Chü-yi Tu Mu Li Shang-yin Su Tung-p'o Li Ch'ing-chao Shen Chou Chu Ta Wen I-to Yen Chen Arthur Sze is the author of six previous books of poetry, includingThe Redshifting Web andArchipelago. He has received the Asian American Literary Award for his poetry and translation, a prestigious Lannan Literary Award, and was recently a finalist for the Leonore Marshall Poetry Prize. He teaches at the Institute of American Indian Arts. from A Painting of a Cat Nan Ch'uan wanted to be reborn as a water buffalo, but who did the body of the malicious cat become? Black clouds and covering snow are alike. It took thirty years for clouds to disperse, snow to melt. -Pa-ta-shan-jen (1626-1705) The Last Day Water sobs and sobs in the bamboo pipe gutter. Green tongues of banana leaves lick at the windowpanes. The four sur… (more)

Archipelago by Arthur Sze
Quipu by Arthur Sze
Wherever you lay your head : poems by Jane Miller
East window : the Asian translations by W. S. Merwin
I don't bow to Buddhas : selected poems of Yuan Mei by Mei Yuan
19 more
The ginkgo light by Arthur Sze
This art : poems about poetry by Michael Wiegers
On poetry & craft : selected prose of Theodore Roethke by Theodore Roethke
Destination zero : poems, 1970-1995 by Sam Hamill
Book of my nights : poems by Li-Young Lee
Bitters by Rebecca Seiferle
Gratitude : poems by Sam Hamill
In search of small gods by Jim Harrison
Vertigo : the living dead man poems by Marvin Bell
Horses where the answers should have been : new and selected poems by Chase Twichell
Darkness Sticks to Everything Collected and New Poems by Tom Hennen
Last poems by Paul Celan
How beautiful the beloved by Gregory Orr
Drawing the line : poems by Lawson Fusao Inada
Only bread, only light : poems by Stephen Kuusisto
So Quietly the Earth by David Lee
While we've still got feet : new poems by David Budbill
Orpheus & Eurydice : a lyric sequence by Gregory Orr
The human line by Ellen Bass
Fewer