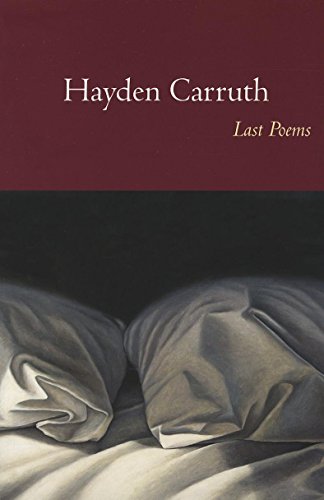 Praise for Hayden Carruth: "Something Hayden Carruth does as well as any writer is to treat the reader as a friend, and to provide, through his poetry, hours of good company."--The New York Times Book Review "One of the lasting literary signatures of our time."--Library Journal, starred review "Carruth, like Whitman, like Chaucer, is large--he contains multitudes. Dip into his work anywhere, and there is life--and death--as stirringly felt and cogitated as in some vast, Tolstoyan novel."--Booklist, starred review Hayden Carruth'sLast Poems is a triumph--a morally engaged, tender, and fearless volume that combines the last poems of his life with the concluding poems from each of his previous volumes. Introduced by Stephen Dobyns,Last Poems is a moving tribute to a towering and beloved figure in American poetry. From "Father's Day": I don't know what fathers are Supposed to do, although the calendar says This is "Father's Day." But the day is gloomy And not at all conducive to visiting or Celebrating. I know the best thing fathers in Their prime can do is to make daughters and More daughters; we can never have enough. Daughters are our best protection against Loneliness and the absurd atrocities of Foreign policy . . . Hayden Carruth (1921-2008) lived for many years in northern Vermont, then moved to upstate New York, where he taught at Syracuse University. He won the National Book Award forScrambled Eggs & Whiskey, and hisCollected Shorter Poems received the National Book Critics Circle Award.… (more)