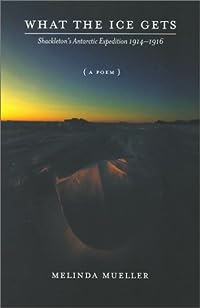 Poetry. History. Travel. Blending historical, scientific, and literary scholarship with an impressive range of poetic forms, Seattle poet Melinda Mueller re-creates one of the most astounding survival stories. WHAT THE ICE GETS is an adventure story, a requiem, and a love poem written to twenty-eight heroes and the mythic landscape they set out to explore but that instead explored them. Both passionate and precise, this is a moving and powerful telling of one of the last century's greatest voyages. The ice has found a worthy poet -- Andrea Barrett. The whole poem is gripping to the end -- Booklist (starred review).

Search Party: Collected Poems of William Matthews by William Matthews
Springing : new and selected poems by Marie Ponsot
At the End of This Summer : Poems, 1948-1954 by John Haines
Practical gods by Carl Dennis
Mermaids in the basement : poems for women by Carolyn Kizer
13 more
Given Sugar, Given Salt by Jane Hirshfield
The Sacraments of Desire by Linda Gregg
Break the glass by Jean Valentine
Sweet Machine : Poems by Mark Doty
Mr. Field's Daughter: A Novel by Richard Bausch
Hinge & Sign: Poems, 1968-1993 by Heather McHugh
The Human Line by Ellen Bass
The country between us by Carolyn Forché
Otherwise: New and Selected Poems by Jane Kenyon
The art of drowning by Billy Collins
Cherry : a life of Apsley Cherry-Garrard by Sara Wheeler
What the light was like by Amy Clampitt
Rare encounters with ordinary birds : notes from a Northwest year by Lyanda Lynn Haupt
Fewer