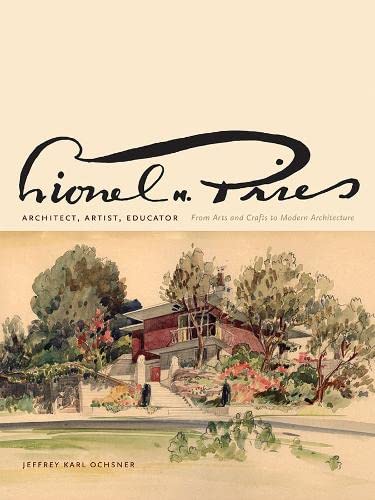 On the evening of May 16, 1958, architecture alumni of the University of Washington converged on Seattle from all over the country. The event was a banquet to celebrate the founding of their alma mater's new College of Architecture and Urban Planning. One by one, the dean introduced the college's faculty members. At the name of Lionel "Spike" Pries, one alumnus recalled, "there was a special charge in the air. . . . Everyone rose and cheered and clapped; it appeared to go on forever." But within six months, Lionel Pries was abruptly and mysteriously gone from the university. After thirty years of service, he lost his job, his major source of income, and, just four years short of retirement, his pension. The official explanation was illness; friends "sensed a large injustice," in what they believed was a dismissal based on Pries's sexual orientation. With Lionel H. Pries, Architect, Artist, Educator: From Arts and Crafts to Modern Architecture, Jeffrey Karl Ochsner redresses that injustice. Pries (1897-1968) was one of the most influential teachers of architecture and design at the University of Washington. Minoru Yamasaki, A. Q. Jones, Fred Bassetti, Wendell Lovett, Victor Steinbrueck, and many other prominent twentieth-century architects were trained by Pries, whose highly artistic style of design helped shape the development of American Modernism in architecture. Ochsner offers an erudite celebration of Pries's professional legacy, tracing his evolution as a designer, architect, teacher, and artist. He shows how Pries absorbed and synthesized disparate influences and movements in design--the California Arts and Crafts and Mission Revival movements, the Ecole des Beaux-Arts tradition, Art Nouveau and Art Deco, Mexican and Japanese motifs, and the International Style and other permutations of the Modern movement. Ochsner paints a vivid portrait of Pries as a teacher and mentor: an unapologetic elitist, one who challenged weak students by openly fostering stronger ones; a classroom autocrat who would fling one student's radio out a second-story window but offer rent-free lodging to another in need. This is a nuanced character study that offers a clear but sympathetic view of a major talent who sometimes clashed with his colleagues and was often in conflict with himself. For some readers, it will be an introduction to Lionel Pries. For others, it will be an occasion to remember him with warmth and gratitude. This comprehensive, lavishly illustrated work will appeal not only to architects and architectural historians, but also to those interested in American studies, the decorative arts, and Northwest history and culture. Its depth of research broadens our understanding of twentieth-century Modernism and of the history of architectural education.… (more)