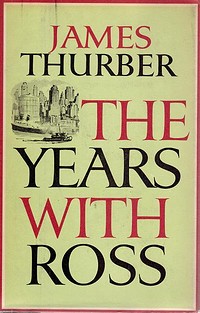 The years with Ross

At the helm of America's most influential literary magazine for more than half a century, Harold Ross introduced the country to a host of exciting talent, including Robert Benchley, Alexander Woolcott, Ogden Nash, Peter Arno, Charles Addams, and Dorothy Parker. But no one could have written about this irascible, eccentric genius more affectionately or more critically than James Thurber -- an American icon in his own right -- whose portrait of Ross captures not only a complex literary giant but a historic friendship and a glorious era as well. "If you get Ross down on paper," warned Wolcott Gibbs to Thurber," nobody will ever believe it." But readers of this unforgettable memoir will find that they do.

LibraryThing member michaelm42071
Thurber’s association with Ross began over a year after Ross had started the magazine, which he edited from 1925 to 1951, the year he died. Thurber had been working as a reporter in Ohio, trying to write a novel in France, also working as a reporter there and then in New York. He sent pieces to The New Yorker starting in June, 1926, eventually placing one. He went to the magazine office in February, 1927 and first met E. B. White, with whom he had common acquaintances, and White took him in to meet Ross. Later Thurber explains that Elwyn Brooks White was called Andy because anyone at Cornell with the last name White got called Andy in memory of the first Cornell president, Andrew White.
Ross hired Thurber as an administrative editor—he was always looking for someone to "straighten things out" at the magazine—and it was a while before Thurber could convince him he was a writer. Ross changed his status on the magazine, but he never asked Thurber’s advice about a practical matter again.
Thurber described the Tuesday afternoon art meetings, where Ross would question everything and anything about a drawing. Thurber notes the importance of Rea Irvin, who did the first cover (“Eustace Tilley” was the name the staff chose for him) and who was responsible for the magazine’s look, its initial cartoon selections, and its typeface, which he designed. Peter Arno (whose real name was Curtis Arnoux Peters), Gluyas Williams (the illustrator of Benchley’s books), Rube Goldberg, and Helen Hoskison were some of the early artists.
There was also a Talk of the Town meeting each week; in the beginning, it was Thurber, Ross, White, Ralph Ingersoll, and Katharine Angell, not yet divorced from Roger Angell’s father and married to White. Later Peter De Vries, Russell Maloney, Wolcott Gibbs, William Shawn (who took over after Ross’s death), and others were involved.
Ross was a friend of H. L. Mencken and George Jean Nathan, [who were co-founders of the magazine but immediately left to edit Smart Set and The American Mercury]. Raoul Fleischmann was the main bankroller of the magazine. The magazine had many regular writers in the early days, including Dorothy Parker, Robert Benchley, S.J. Perlman, Edmund Wilson, and Sally Benson.
Thurber believes Ross was a great editor, though he gives ample room to his prejudices—about any whiff of sex in the magazine, for instance—and his ignorance on many topics. Ross was always looking for a miracle man to organize the magazine, and he drove a series of people crazy after hiring them for this job. Wiser people—Hobart Weekes, Wolcott Gibbs, Clifton Fadiman—turned down the Big Job. Eventually, there was a team, including Ik Shulman and St. Clair McKelway, who did the Big Job among them without going crazy.
Thurber tells the story of the early years of the magazine from an insider's point of view and with a lot of humor.… (more)
3 more
LibraryThing member EricCostello
Highly entertaining account by a master storyteller, the subject being primarily legendary editor Harold Ross, and the secondary subjects being the vast cast of characters surrounding Ross and the New Yorker. One has to take the accounts here with a substantial grain of salt, since Thurber *was* a storyteller; some other accounts of Ross and Thurber cast a bit of doubt on some of the anecdotes. Nevertheless, it's a fun and entertaining read, which is recommended.… (more)
LibraryThing member Cheryl_in_CC_NV
This would be better if personally relevant, that is to say it's better suited for fans of the New Yorker.
LibraryThing member DinadansFriend
James Thurber was a fine stylist, and this is his best non-comic book. It's a linked biography of both men, and a tribute to a very exacting but supportive editor. The world is richer for this book, especially devotees of old issues of "The New Yorker".
Fewer