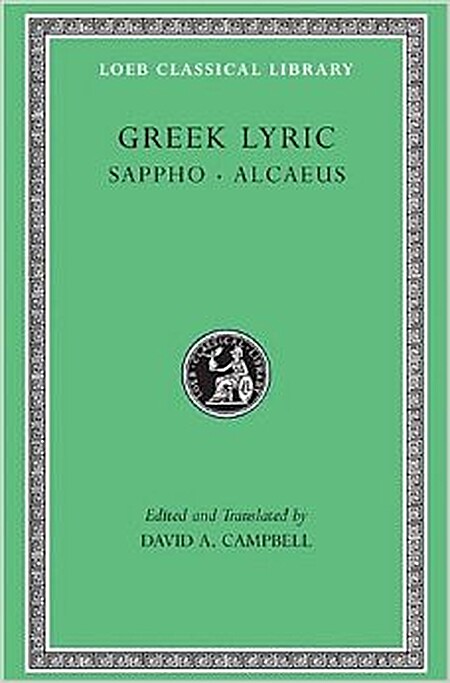 by David A. Campbell (Editor)

This volume contains the poetic fragments of the two illustrious singers of early sixth-century Lesbos: Sappho, the most famous woman poet of antiquity, whose main theme was love; and Alcaeus, poet of wine, war, and politics, and composer of short hymns to the gods. Also included are the principal testimonia, the ancients' reports on the lives and work of the two poets. The five volumes in the Loeb Classical Library edition of Greek Lyric contain the surviving fragments of solo and choral song. This poetry was not preserved in medieval manuscripts, and few complete poems remain. Later writers quoted from the poets, but only so much as suited their needs; these quotations are supplemented by papyrus texts found in Egypt, most of them badly damaged. The high quality of what remains makes us realise the enormity of our loss. Volume I presents Sappho and Alcaeus. Volume II contains the work of Anacreon, composer of solo song; the Anacreontea; and the earliest writers of choral poetry, notably the seventh-century Spartans Alcman and Terpander. Stesichorus, Ibycus, Simonides, and other sixth-century poets are in Volume III. Bacchylides and other fifth-century poets are in Volume IV along with Corinna (although some argue that she belongs to the third century). Volume V contains the new school of poets active from the mid-fifth to the mid-fourth century and also collects folk songs, drinking songs, hymns, and other anonymous pieces.… (more)

Fragments all. What's left is the one percent, rich,
Rare. When Alexandria burned, the whole world
Choked to breathe the smoke of the ninety-nine. Now,
Desperate to get you

Back, we trawl millennia-old unearthed dumps,
Hunting out your clotted Aeolic strung lines.
Lone hendecasyllables' sounds that awed Greeks
After you quoted.

Questing, reading, marvelling – so we search on,
Poets seeking answers to questions all lost
Lovers ask. Your answers still reach us, drenched, fresh
From the Aegean.

A LIFE IN FRAGMENTS

Towards the end of the second century AD, in the last flickering light of classical Greece, a philosopher called Maximus, in a city on the Levantine coast, wrote a grammatical textbook about figures of speech. Casting around in old books for examples of how poets have described love, he writes: ‘Diotima says that Love flourishes when he has abundance but dies when he is in need: Sappho combined these ideas and called Love bitter-sweet and “ἀλγεσίδωρον”.’

So we have this one word that Sappho wrote, some eight centuries before Maximus was born. This is what we mean when we talk about her poetry existing in ‘fragments’. The Canadian poet Anne Carson translates this example as:

Very often these remnants are quoted with no regard to any poetic quality, but rather in illustration of some grammatical point. Apollonius Dyscolus, for instance, writing again some time in the 100s AD, included a throwaway remark on variant dialects during an essay on pronouns. ‘The Aeolians,’ he said, ‘spell ὅς [‘his, hers, its’] with digamma in all cases and genders, as in Sappho's τὸν ϝὸν παῖδα κάλει.’ Again Carson's translation gives us just the phrase in question:

she summons her son

Carson's translation of Sappho's oeuvre is well subtitled ‘Fragments of Sappho’, since most of what's left is of this nature. It's certainly nice to have everything collected in this way in English, though it must be admitted that her book sometimes seems more an exercise in completionism than in poetic expression. That said, as other reviewers have pointed out, reading pages and pages of these deracinated terms (‘holder…crossable…I might go…downrushing’) can succeed in generating a certain hypnotic, Zen-like appeal.

Nevertheless, such things lose a lot by being read in isolation; the as it were archaeological pleasure of digging them out of their original context, in works of grammar or rhetoric, is completely absent. For that, the Loeb edition translated by David A. Campbell is far preferable, for all that he has no pretensions to being a poet, just because you get Sappho delivered in that context of other writers. The fonts used for the Greek are also much more readable in the Loeb. (The Carson edition does include the original Greek, and points for that – though there are some strange editorial…choices? mistakes? – such as printing ς for σ in all positions.)

To the Ancient Greeks, Homer was simply ‘The Poet’ – and ‘The Poetess’ was Sappho. She was held in extraordinarily high esteem, which makes it the more frustrating that so much of her has been lost: ninety-nine percent, according to some experts. Only one or two poems remain that can be said to be more or less complete.

Her poetry is mainly ‘lyric’, that is, designed to be sung while strumming along on the lyre. Sappho was, in modern terms, a singer-songwriter; she was known to be an extremely talented musician, designing a new kind of lyre and perhaps even inventing the plectrum. When we read her poetry now, we have to remember that we're looking at something like a shredded collection of Bob Dylan or Georges Brassens lyrics, with no idea of how their meaning would have interacted with the music.

But however important the lost melodies, we do know that she was revered for the beauty of her phrasing. This is something translators struggle with. Fragment 146, a proverb about not wanting to take the bad with the good, is rendered literally by Campbell as ‘I want neither the honey nor the bee’ and by Carson, ‘Neither for me honey nor the honey bee’ – which is better, but consider the alliterative dazzle of the original:

Reading the Greek, even if you don't understand what any of the words mean, will often get you halfway there with Sappho. Say it out loud and you'll get a tingle, as it starts to dawn on you what all the fuss might have been about.

But the rest of the job has to be done by translators. The Loeb edition will not help you here: its prose translations are only a crib to help you study the original. Carson's approach is slightly conflicted. She quotes approvingly a well-known statement from Walter Benjamin to the effect that a translation should ‘find that intended effect…which produces in it the echo of the original’, i.e. that one should translate ideas and feelings rather than words. But she also claims to be trying to use ‘where possible the same order of words and thoughts as Sappho did’, which is the sort of thing that makes me instantly suspicious.

Here's her version of Fragment 2, which is one of the more complete poems we have, scratched on to a broken piece of pottery which has miraculously survived from the second century AD. The first stanza (an invocation to Aphrodite) is probably missing, but the next two run like this:

]
here to me from Krete to this holy temple
where is your graceful grove
of apple trees and altars smoking
with frankincense.

And it in cold water makes a clear sound through
apple branches and with roses the whole place
is shadowed and down from radiant-shaking leaves
sleep comes dropping.

This is not bad. I think the word order is unnecessarily foreign at times, but it does sound good and Carson even includes a few of Sappho's famous hendecasyllabic lines – though they are not true ‘Sapphic’ verses, a very strict form which is not well adapted to English (as you may be able to tell from my attempt at the top of this review).

Aaron Poochigian, in a selected edition for Penguin Classics, takes a different approach. ‘Sappho did not compose free verse,’ he chides, perhaps with one eye on Carson, ‘and free-verse translations, however faithful they may be to her words, betray her poems by their very nature.’ Poochigian's version of the stanzas above goes like this:

Leave Crete and sweep to this blest temple
Where apple-orchard's elegance
Is yours, and smouldering altars, ample
Frankincense.

Here under boughs a bracing spring
Percolates, roses without number
Umber the earth and, rustling,
The leaves drip slumber.

I think that's pretty great. It takes much more liberties with Sappho's actual words but, to the extent that it produces a sensual thrill in English, it more faithfully reproduces the effect that Sappho had on her original audience. At least, to me it does. Poochigian's selection, called Stung with Love, is much shorter than the other two I read, but a very good encapsulation of her qualities. It also has by far the best introduction, a brilliant essay which puts Sappho in her context extremely well. And because it's the most recently published, it's also able to include the magic new Sappho poem discovered in 2013, written on a scrap of papyrus used to stuff a mummy.

BIGGER THAN A BIG MAN

‘Someone will remember us / I say / even in another time.’ Another fragment. The irony of this one upset me at first, because she should have survived in far greater quantities than she did. But even so, the thrill of hearing the voice of a woman who lived six centuries before Christ was enough to catch my breath over and over again. Generally speaking, women in antiquity are pretty silent. But Sappho isn't, and her influence, despite the meagre remains we have, is ginormous.

It might sound hyperbolic to claim that all modern love poetry is inherited from Sappho, but in fact there's a very real sense in which that's true – so great was her reputation among Classical writers and the Europeans who, in turn, studied them, that it's quite possible to trace a direct line from Sappho, through Catullus, to the Romantic poets and from them to contemporary pop lyrics. Every song about the pain of unrequited love owes something to Sappho's Fragment 31, for example – ideas now so clichéd that we forget they have an ancestry at all. That's just natural, surely – just the way people speak? But no, it isn't natural, it's Sappho. She's part of our inheritance, part of our language. She's under our tongue.… (more)
1 more
LibraryThing member Hera
A beautiful book that I carry everywhere. Even the fragments of Sappho's poetry are memorable. She used words in a subtle, surprising way and was rightly regarded as the 'tenth Muse'.
Fewer