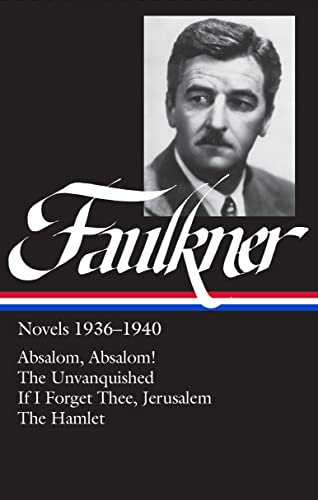 The four novels in this Library of America collection show Faulkner at the height of his powers and fully demonstrate the range of his genius. They explore the tragic and comic aspects of a South haunted by its past and uncertain of its future. In the intricate, spellbinding masterpiece Absalom, Absalom! (1936), Quentin Compson descends into a vortex of images, voices, passions, and doomed desires as he and his Harvard roommate re-create the story of Thomas Sutpen and the insane ambitions, romantic hopes, and distortions of honor and conscience that trap Sutpen and those around him, until their grief and pride and fate become the inescapable and unbearable legacy of a past that is not dead and not even past. In seven episodes, The Unvanquished (1938) recounts the ordeals and triumphs of the Sartoris family during and after the Civil War as seen through the maturing consciousness of young Bayard Sartoris. The indomitable Granny Millard, the honor-driven patriarch Colonel Sartoris, the quick-witted and inventive Ringo, the ferociously heroic Drusilla, and the scheming, mendacious Ab Snopes embody the inheritance that Bayard must reconcile with a new, but diminished, South. If I Forget Thee, Jerusalem (published in 1939 as The Wild Palms) tells of desperate lovers fleeing convention and of a convict escaping the chaos of passion. In "The Wild Palms," an emotional and geographic odyssey ends in a Mississippi coastal town. In counterpoint, "Old Man" recounts the adventures of an inarticulate "tall convict" swept to freedom by a raging Mississippi flood, but who then fights to return to his simple prison life. In The Hamlet (1940), the first book of the great Snopes family trilogy, the outrageous scheming energy of Flem Snopes and his relatives is vividly and hilariously juxtaposed with the fragile communal customs of Frenchman's Bend. Here are Ike Snopes, in love with a cow, the sexual adventures of Eula Varner Snopes, and the wild saturnalia of the spotted horses auction, a comic masterpiece. The Library of America edition of Faulkner's work publishes for the first time new, corrected texts of The Unvanquished, If I Forget Thee, Jerusalem, and The Hamlet. (The corrected text of Absalom, Absalom! was published by Random House in 1986.) Manuscripts, typescripts, galleys, and published editions have been collated to produce versions that are faithful to Faulkner's intentions and free of the changes introduced by subsequent editors. LIBRARY OF AMERICA is an independent nonprofit cultural organization founded in 1979 to preserve our nation's literary heritage by publishing, and keeping permanently in print, America's best and most significant writing. The Library of America series includes more than 300 volumes to date, authoritative editions that average 1,000 pages in length, feature cloth covers, sewn bindings, and ribbon markers, and are printed on premium acid-free paper that will last for centuries.… (more)

LibraryThing member jwhenderson
While The Unvanquished began as a collection of short stories that had been published elsewhere, there is enough continuity among the stories for the whole to stand reasonably as a novel, even though the vignettes can be read separately. Perhaps the best story was the final one, An Odor of Verbena, that Faulkner wrote specifically for this novel.

The Civil War is "present time" although the narrator, young Bayard Sartoris, is recalling events that happened many years earlier. His story begins as Colonel Sartoris comes home for a day to warn his family that Yankee soldiers are nearby and to help build a stock pen to hide his animals from the Yankees. A few days later, a Yankee soldier rides onto Sartoris land. The colonel’s twelve-year-old son Bayard and his companion Ringo, a slave on the plantation, shoot at the soldier. The boys hide under Granny’s skirts when more soldiers come to search the property for them. Granny denies that any children live on the property, and a colonel orders the rest of the men off the land while eyeing Granny’s skirts. The stories all feature the relationship of Bayard and Ringo, while Granny and Drusilla are also important characters.

Later, advised by Colonel Sartoris, Granny leaves for Memphis because of the dangers of the war. Joby, the Colonel’s servant, drives a wagon carrying Granny, Ringo, Bayard, and a trunk filled with silver that was buried in the yard for safekeeping. During the journey, Yankee soldiers steal their mules and Bayard and Ringo chase them unsuccessfully on a “borrowed” horse. Colonel Sartoris finds the boys and takes them home, capturing a Yankee camp on the way. Joby and Granny also make it back home with the help of “borrowed” horses, and the trunk containing the silver is again buried in the yard. Yankee soldiers come to capture Colonel Sartoris. Granny, Ringo, and Bayard drive six days to Hawkhurst, Alabama, to recover their trunk, their mules, and the runaway slaves. On the journey, they pass hundreds of former slaves who are following the Yankee troops to freedom. At Hawkhurst, Granny’s niece, Drusilla Hawk, joins the group, and the four of them travel to the river, where Yankee soldiers have built a bridge. After crossing, the soldiers hurry to destroy the bridge so the people who have followed them to freedom will be unable cross. The Sartoris wagon gets pushed into the river, and the four travelers make it to the other side, where the Yankee troops are now stationed.

Granny asks to speak with Colonel Dick. She asks for the return of her mules, her trunk, and Loosh and Philadelphy. Colonel Dick gives Granny a written statement from the commanding general dated August 14, 1863, that validates the return of 10 chests, 110 mules, and 110 former slaves who are following the troops. The document allows them to pass safely through any Yankee troops they might encounter and also to petition them for food during the journey home. The story continues with episodes featuring Granny and Drusilla. The differences between the traditions of the Sartorises and other established families and entrepreneurs like Ab Snopes (the Snopes family is explored in detail in the three novels known as The Snopes Trilogy) are highlighted. These and the previous stories also emphasize the tension between the cultures of the established Southerners and marauders, many of whom were Yankees.

About eight years later, Bayard is in his third year studying law in Oxford, Mississippi. Ringo comes to him to report that John Sartoris has been killed by his rival, Ben Redmond. On the forty-mile ride home, Bayard reflects on the last few years: his father’s marriage to Drusilla and the code of violence to which they adhere, his father’s railroad venture with Redmond, their run against each other for political office, his father’s humiliating taunting of Redmond, and his father’s recent decision to turn against killing and meet Redmond unarmed. Bayard knows Drusilla and the men in Jefferson will expect him to avenge his father’s death. Bayard realizes that killing is not a satisfactory solution. Determined neither to kill again nor to be a coward, he goes to Jefferson the next day to meet Redmond unarmed. Redmond shoots twice, intentionally missing Bayard, and leaves town. Bayard returns home and finds that Drusilla has gone to live with her brother but has left behind a sprig of verbena for him.

The Unvanquished provides a view of the Civil War and some of its consequences from the perspective of young Bayard and his extended family. It is a serious assessment of the Southern legend, and a declaration of independence from the past. The characters are deftly portrayed and the stories well-told.… (more)