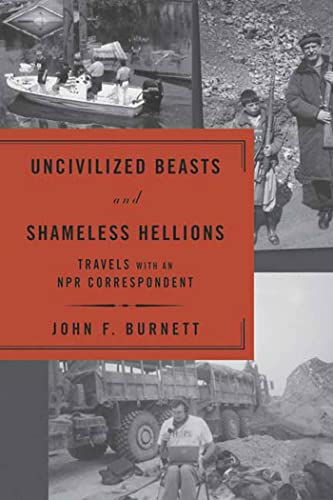 Uncivilized beasts and shameless hellions : travels with an NPR correspondent

In this candid, intimate account, an award-winning 20-year veteran NPR correspondent takes readers behind the scenes of the major events of our time, letting us see what it's really like gathering the news on the front lines As a radio journalist whose work appears regularly on Morning Edition and All Things Considered, John F. Burnett has reported from the Branch Davidian standoff and the Kosovo conflict. He has covered the drug wars in Central America; been embedded in a Marine Division in Iraq; and weathered Hurricane Katrina, breaking news hourly on the conditions in New Orleans. And he was one of NPR's lead reporters on 9/11 and its aftermath. But no matter how much time Burnett has on the air to report his stories--and how expertly he has done so--there are always valuable details that aren't mentioned. Now he fills in those rich tidbits, letting us witness the parts of the stories that remained off the air. In Uncivilized Beasts and Shameless Hellions, Burnett exposes the hilarious moments, bizarre encounters, dangerous highways, insufferable colleagues, and unsung heroes he's known through his adventures as an NPR reporter. The result is a revealing and personal account that will fascinate not only NPR listeners but also anyone interested in the state of our world today and how the media covers it.… (more)

Staying tuned : a life in journalism by Daniel Schorr
About the New Yorker and me : a sentimental journal by E. J. Kahn
All I Did Was Ask: Conversations with Writers, Actors, Musicians, and Artists by Terry Gross
Cronkite by Douglas Brinkley
Take the Cannoli : Stories from the New World by Sarah Vowell
1 more
Oaxaca Journal (National Geographic Directions) by Oliver Sacks
Fewer