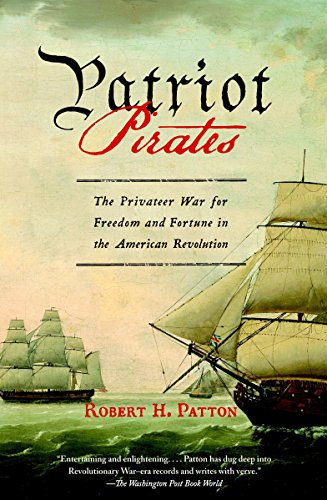 Patriot Pirates: The Privateer War for Freedom and Fortune in the American Revolution

A revelation of America's War of Independence, a sweeping tale of maritime rebel-entrepreneurs bent on personal profit as well as national freedom. Privateers were legalized pirates empowered by the Continental Congress to raid and plunder, at their own considerable risk, as much enemy trade as they could successfully haul back to America's shores. Patton writes how privateering engaged all levels of Revolutionary life, from the dockyards to the assembly halls; how it gave rise to an often cutthroat network of agents who sold captured goods and sparked wild speculation in purchased shares in privateer ventures, enabling sailors to make more money in a month than they might otherwise earn in a year; and how they turned their seafaring talents to the slave trade. Vast fortunes made through privateering survive to this day, among them those of the Peabodys, Cabots, and Lowells of Massachusetts, and the Derbys and Browns of Rhode Island.--From publisher description.… (more)

LibraryThing member jguidry
I really wanted to love this book because the premise was very interesting.  There were a few interesting stories woven throughout that captured my whole attention.  For instance, I was fascinated by the battle between John Paul Jones and the privateers because sailors were abandoning the navy to join privateers for money.  Unfortunately, such stories were scattered willy-nilly in an unorganized narrative.  Patton would have benefited from a good editor and an outline.  There was a good story there, it just got lost in the shuffle.… (more)
1 more
LibraryThing member NickHowes
With only a handful of American Navy warships against the globe-spanning Royal Navy, the real focus on the war at sea was carried out by privately-owned warships, privateers, authorized to attack English ships in exchange for part of what sale of ship and cargo realized. About 1,000 privateers tackled the English fleet with great losses, funneling supplies to the American army and driving up insurance rates. An eye-opening insight into a largely ignored as left of the War for Independence at sea. for this overview, I would like to have seen some more statistics, even with the understanding that firm figures are likely not available.… (more)
Fewer