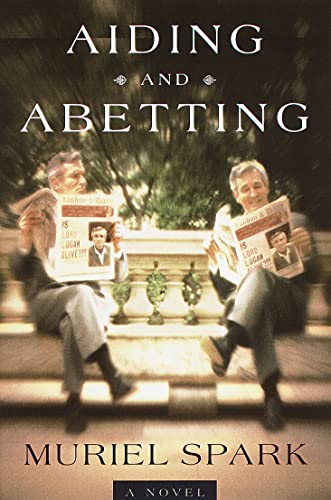 It is 25 years after Lord Lucan's mysterious disappearance in the wake of the vicious murder of his children's nanny. The celebrated psychiatrist Dr. Hildegard Wolf is approached in her Paris consulting rooms by not one, but two men, both claiming to be Lucan. Can Dr. Wolf unveil the mystery before her own dark secret is revealed?

LibraryThing member laytonwoman3rd
Who's scamming whom, and which preposterous imposter is a killer, and who will find the real fugitive Earl of Lucan (or is he dead?) and who is more afraid of having the past revealed--the hunter or the hunted? Farcical, bloody and blackly humorous. Not, however laugh-out-loud funny, at least in my opinion, as promised by some reviewers.… (more)
10 more
LibraryThing member crunky
A competent diversion with some understated humor. The third Spark book I've read, but if it had been the first I wouldn't have rushed to pick up a second.
LibraryThing member Kasthu
Aiding and Abetting is based on a true story, but embellished upon by Muriel Spark. Lord (“Lucky” due to his successes at the gambling tables) Lucan disappeared from England in 1974 after bludgeoning his children’s nanny, intending for it to be his wife. Officially declared dead in 1999, this novel is a “what if?” about what happened. The story revolves around a psychotherapist, Hildegard Wolfe, who has a sinister past. One day two patients walk into her office declaring that he is the real Lord Lucan. Which one is which?

As with many of Muriel Spark novels, nothing is what it seems on the surface. It seems at first to be a case of mistaken or hidden identity, but the story evolves into much more than that. This is a pretty bizarre story, filled with farcical coincidences. All of them were “aiders and abetters” who apparently sought to confuse and befuddle the police. Added on top of this is an author looking to write Lord Lucan’s story and publish an exclusive interview with him. It’s interesting that Spark theorizes details of the case that were later verified or speculated upon—such as Lord Lucan having received plastic surgery after the murders. Everyone keeps seeing Lucan everywhere, “but it may not have been him.”

It’s an interesting case, and it’s fun to wonder about what really did happen to the missing Earl. Spark’s tale is purely fantasy, of course, though she sticks with many of the details of the case. In fact, she probably got the idea for the two Lord Lucans from the account of a close friend of Lucans, who saw him in Africa in the 1980s. According to the friend, he saw Lucan standing on a bridge and was later joined by a friend who claimed that he too was Lord Lucan. There are been over 70 “sightings” of him all over the world; in February 2012, new evidence came to light to support the claim that he was in Africa. The question remains, though: is Lucan really dead? By now I think so.… (more)
LibraryThing member DameMuriel
So, this is not her best book. Let's just go ahead and lay that on the table. But even her worst books are at least 90% (possibly more) better than most of the other books published at the time of the publication of this book.
Has this ever been filmed? It should be. But not by Martin Scorsese or someone lame like that. I don't know who. But not him.… (more)
LibraryThing member Porius
A Lord Lucan ("Lucky Lucan") has killed his children's nanny and bludgeoned his Lady wife. It's years later and two strange characters are seeing a shrink claiming to be the infamous lord. The shrink has a shady past of her own. Beate Pappenheim, now Hildegard Wolf, was a stigmatic who pretended to cure the incurables and other hopeless cases. She made quite a bit of money at this scam, but tired of it and set up shop in Paris as a head shrinker.
AIDING AND ABETTING sparkles with wit and the things usual that make her always an entertaining story-teller. Sparks novels, never prolix, have the spare beauty of a Hitchcock heroine: Eva Marie Saint, Grace Kelly, or someone of that ilk. Did I mention that this novel was written in her eighties.… (more)
LibraryThing member agirlandherbooks
A spare and enjoyable imaginary romp through what may have happened to Lucky Lucan, a British aristocrat on the lam since 1974. Dame Spark was economical with her use of words, which should serve as an example to other authors (I'm talking to you, Marisha Pessl).
LibraryThing member gbelik
Two persons come into psychiatrist Hildegard Wolf's office, claiming to to Lord Lucan, who, 25 years earlier, murdered his children's nanny while attempting to kill his wife. Which is the real Lord Lucan and what should she do about it? It all left me rather flat.
LibraryThing member MizPurplest
Delightfully witty and deliciously wicked, this was a fast, fun summer read.
LibraryThing member jonfaith
If one wished, Aiding and Abetting could be regarded as a slight whimsy. The novel could also be regarded as parlor game for deception and dark humor. We meet three charatcrs, two of whom are frauds and the third a muderer, albeit an aristocrat. This situation is pondered and then two other characters are inroduced with a shared purpose of locating the murderer. A tissue of circumstances unfold and the novel ends.… (more)
LibraryThing member thorold
Anything but predictable, Spark chooses this novel to try out her own peculiar slant on "true crime". A man walks into the consulting room of a fashionable Paris psychotherapist and tells her that he is the 7th Earl of Lucan, on the run from the police for more than 25 years. A disturbing statement at the best of times, more so in this case, as Dr Wolf is already treating another patient who makes the same claim, and furthermore she appears to have something to hide herself...

Spark has fun playing around with the idea of what it would be like to spend such a large part of your life as a fugitive, and with such a nasty crime on your conscience (if indeed you have a conscience). And she enjoys hypothesising about how (and why) Lucan's friends could have protected him for so long. Interestingly, she has her imagined Lucan reflect that his fellow-peers mostly failed to exhibit class solidarity, and that it is his gambling pals who have been financing his undercover lifestyle. She resists the temptation to romanticise Lucan himself, though: he comes across as an arrogant, selfish bore. And he gets treated to a suitably Sparkish ending, too.… (more)
LibraryThing member SirRoger
Delightfully wicked humor: classic Spark. Fictional literary treatment of two legendary criminals, a fraud and a murderer, who really existed and somehow disappeared.
Fewer

Aiding and abetting : a novel by Muriel Spark (Paper Book)