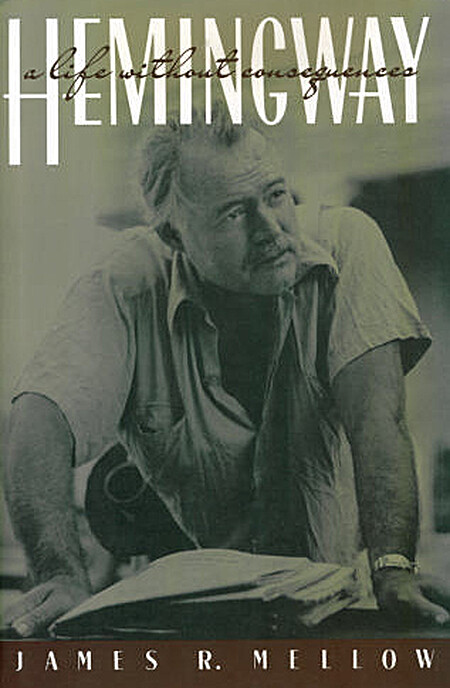 Hemingway : a life without consequences

"He was the man who had all the credentials, who witnessed the time - the people, the names that were being elevated into history." In this brilliant new biography of Ernest Hemingway, award-winning author James R. Mellow offers a thorough reassessment of a man who was both a literary giant and an icon for his age. Through painstaking research and the use of new material, Mellow reveals aspects of the writer's life unexplored by previous biographers, corrects the record on important matters of chronology and fact, and explodes many of the myths Hemingway carefully constructed around his life." "Legendary Writer, peerless war correspondent, avid sportsman - and a suicide at the age of sixty-one - Hemingway lived a life profound in its accomplishments and tragic in its personal implications. From the salons of Paris to the corridas of Spain, from the revolutions in Cuba to a near-fatal safari in the African bush country, he both recorded and helped shape an era of unparalleled artistic achievement and untoward violence." "The cast of characters in Hemingway: A Life Without Consequences includes the famous and the infamous of the times: Ezra Pound, Gertrude Stein, Pablo Picasso, Scott and Zelda Fitzgerald - as well as Adolf Hitler, Benito Mussolini, and Georges Clemenceau. Mellow explores Hemingway's wary negotiations with the politics of the period and describes his journalism in unprecedented detail, reconstructing the writer's youthful interviews with world powers and placing him among America's greatest journalists." "Here too is an entirely new perspective on Hemingway's private life. On her marriage to Hemingway in 1921, Hadley Richardson tellingly referred to her husband's disappointed men friends as a "heart-busted bunch." Demanding, bawdy, affectionate, mercurial, Hemingway early on established a pattern for male companionship - a need to dominate, a need for approval, a dependence on older men as confidants - that endured throughout his life and reverberated in his fiction. Mellow investigates the profound personal and artistic implications of the writer's friendships with men, bringing provocative insight to a complex subject." "The final volume in James Mellow's "Lost Generation" trilogy, Hemingway: A Life Without Consequences is, as well as an homage to Paris in the 1920s, a rumination on the art of biography, and a lyrical tribute to the writers and artists who set the indelible standards for the modern age."--BOOK JACKET.Title Summary field provided by Blackwell North America, Inc. All Rights Reserved… (more)

LibraryThing member Michael_Godfrey
Mellow's biography of Hemingway manages the unmanageable: he writes sensitively of an insensitive subject, and weaves a narrative of convincing enough factuality out of a subject who thrived, in more way than one, on fiction. For this reader at least Hemingway emerges as thoroughly reprehensible, and Mellow as thoroughly admirable! That I'm sure was not Mellow's intention. He writes with beautiful clarity and narrative energy and creates an unforgettable biography of a larger than life tragedy. Only the photos are a disappointment.… (more)
1 more
LibraryThing member Neftzger
This is an excellent source of information for true Hemingway fans. Mellow does a great job of detailing Hemingway's life and providing documentation from letters and other sources as he pieces together the history of Hemingway's own life story. That said, this is more of a scholarly work and unless you are a true Hemingway fan the book may be cumbersome to read, as it is extremely detailed. It would be an excellent resources for a college paper or anyone who desires to know as much as can be possibly known about this author. A great reference book/ resource.… (more)
Fewer

Less than a treason : Hemingway in Paris by Peter Griffin
Along with youth : Hemingway, the early years by Peter Griffin
The dangerous summer by Ernest Hemingway
Some sort of epic grandeur : the life of F. Scott Fitzgerald by Matthew J. Bruccoli
Walks in Hemingway's Paris: a guide to Paris for the literary traveler by Nol︠ R. Fitch