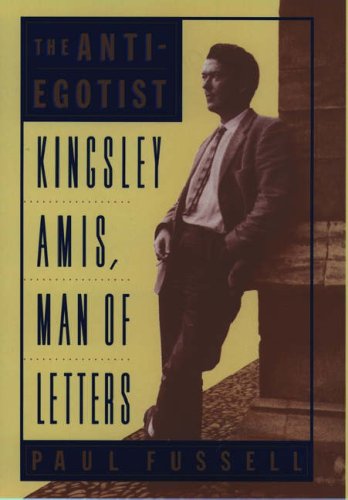 "Fussell is a wonderful writer," according to The Washington Post Book World, "at once elegant and earthy." With such books as Wartime and The Great War and Modern Memory, he established a reputation as an incisive critic with a razor-tipped pen. Now Paul Fussell turns his attention to oneof his own literary heroes, a man of similar acidic wit, Kingsley Amis.In The Anti-Egotist, Fussell captures the essence of Amis as a man of letters--"a serious critic," as John Gross writes, "operating outside the academic fold." Part biography, part critical appraisal, The Anti-Egotist traces the influences that have shaped Amis's writing, ranging from hisschooldays through military service to university teaching, as he emerged as a novelist, poet, and essayist. By drawing our attention to the details first of Amis's life, then of his writing, Fussell reveals the profound moral sense that expresses itself so wonderfully in Amis's fiction andcriticism. He mixes affection with insight as he paints a highly personal portrait of Amis as writer who despises self-promotion in all its forms, savaging the world's show-offs and blowhards with a particularly sharp-toothed bite. Amis's criticism, too, shook the British literary world with his"no-nonsense, can-the-bullshit tone," restoring skepticism and honesty to postwar English writing. Fussell guides us through Amis's immense output--portraying him as a book reviewer, custodian of language, gastronomic critic, anthologist, and poet--showing how his overriding concern is always forthe public, deriding pretensions that come at a cost to the audience. And the power of Amis's writing, from his humor to his deft characterization, rings through in page after page of Fussell's accurate and evocative assessments.In recent years, Kingsley Amis has drawn considerable fire, thanks to his outspoken conservative opinions; many critics see him as little more than a crusty old curmudgeon. In The Anti-Egotist, Paul Fussell does the reading public a double favor in restoring the reputation of this importantwriter: he effortlessly captures the literary virtuosity that lifted Amis to fame, and he reveals the moral convictions that make this seeming curmudgeon more relevant than ever.… (more)

Los Angeles Times
It must have struck the publisher as a marvelous pairing--independent, forthright, wide-ranging, witty, often cantankerous writer Paul Fussell commenting on independent, forthright, wide-ranging, witty, often cantankerous writer Kingsley Amis. Alas, it was a mistake: Fussell is not only a friend of Amis, but too much like him, it appears, to be able to produce anything more than a sycophantic portrait... Fussell responds within the book to a few of Amis' critics, among them Saul Bellow, but the rejoinders are usually lame--an indication that Fussell, like Amis, would rather dismiss severe criticism than understand it. Neither Fussell's nor Amis' reputation will be enhanced by this volume.