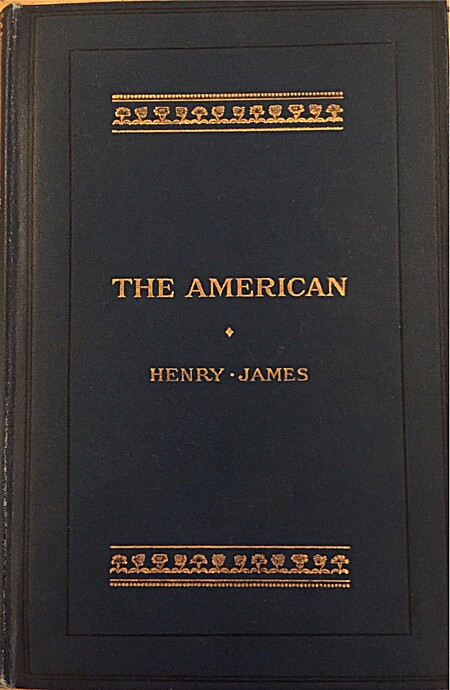 The text reprinted in this volume is based on an examination of the five printed versions of The American (first published in 1877) which appeared in James's lifetime, and it is preceded by his "Preface to the New York Edition" (1907). The textual history of the novel is traced in A Note on the Text; a list of substantive variants and emendations; a facsimile manuscript page showing James's method of revision; and a list of the installments of the novel as they appeared in The Atlantic. "Backgrounds and Sources" includes relevant extracts from correspondence, reviews, and articles by James and others, and from his Notebooks and Hawthorne. "Contemporary Reception" of the novel is illustrated by twenty-one American and English reviews. "Twentieth-Century Criticism" is represented in essays by Leon Edel, Oscar Cargill, Irving Howe, Richard Poirier, Royal A. Gettmann, and James W. Tuttleton. A Selected Bibliography is included for further study.… (more)

LibraryThing member jwhenderson
This was my introduction to the novels of Henry James. I first read this book in my American Literature course in college and remember the experience to this day. Starting with his second novel, Roderick Hudson, Henry James featured mostly American characters in a European setting. James made the Europe–America contrast even more explicit in his next novel. In fact, the contrast could be considered the leading theme of The American. This book is a combination of social comedy and melodrama concerning the adventures and misadventures of Christopher Newman, an essentially good-hearted but rather gauche American businessman on his first tour of Europe. Newman is looking for a world different from the simple, harsh realities of 19th century American business. He encounters both the beauty and the ugliness of Europe, and learns not to take either for granted. Coming as it did as my first taste of reading Henry James it laid the groundwork for my enjoyment of many of his more mature novels.… (more)
11 more
LibraryThing member maven79
America meets France meets England in this transporting novel of suspense by the transatlantic master of mysteries of the heart. When American millionaire Christopher Newman travels to Paris to find the perfect bride, he is plunged into a perfect storm of intrigue. His bold pursuit of the woman he loves is met with icy opposition and fatal secrets.… (more)
LibraryThing member ronsea
While the James's rigid stylistic control over language is dated, the story line and characters are well developed.
LibraryThing member stillatim
I'd only read 'the Europeans' of the early James before this. That was good, but hey, it's really short, not much he could do. This is justly celebrated. Not one to read if you're after a black and white morality tale about the evils of American Commercialism - which does end up looking a bit empty - or the evils of European stuffiness - which does end up looking more than a bit evil; or the great goodness (both also look good in their own way) of either of them. And that's what the book is about. It's not much of a love story, if that's what you're after.

I wonder what it would be like reading this as an American? Hmmm....… (more)
LibraryThing member Schmerguls
When I finished reading this book on May 4, 1963, I said to myself: "A work of consummate skill. The last third of the book caught me up--maybe because I had grown used to its style. Christoper Newman's final walk from the Carmelite convent to Notre Dame, and his visit thereto, are expertly done: "He wandered some distance up the nave and sat down in the splendid dimness. He sat a long time; he heard far away bells chiming off into space, at long intervals, the big bronze syllables of the Word..." On May 25, 1963 I made a postscript to this enrty: ":in Leon Edel's Volume II of his biography of James : "He goes to Notre Dame, and sitting there, he hears 'far away bells chiming off, at long intervals, to the rest fo the world,' [Into his revision of this passage many years later Henry infused more poetry, speaking of 'far away bells chiming off into space at long intervals, the big bronze syllables of the Word'}] and decides that revenge isn't his game.'"… (more)
LibraryThing member JVioland
One of his better works, but still not great. It appears as though his earlier works were better written. By the time I got to "The Wings of the Dove" (1902) I had grown tired of him. By the end of his career, there wasn't a simple action or thought that he couldn't convey in an unending stream of words. His mantra seemed to be, "I could be succinct, but why? I enjoy writing. I couldn't give a damn whether I burden the reader with my verbal diarrhea." A highly overrated writer, maybe because he was an ex-patriot.… (more)
LibraryThing member Artymedon
Prompted by a sudden disgust for a payback stock market revenge, the central character of Henry James' novel, "The American"; Christopher Newman, who made his fortune in San-Francisco, becomes a reversed Christopher Columbus and discovers Europe, a continent made for him.
LibraryThing member dandelionsmith
Recommended by a book on writing. Henry James has an engaging detail of description, yet in this novel, the story is alternatively dramatic and romantic, showing both flaws and features. The development takes as many turns as a mountain road on the Tour de France, but with more enjoyment.
LibraryThing member DanTarlin
I decided to pick up this old classic piece of literature and give it a try. One of the things I wonder sometimes is how books move from being unquestioned parts of the Canon to being afterthoughts, and I think this is an example. It's a product of its time, and gives some insight into what life among the French aristocracy was like in the late 19th century; great literature takes a particular story set in a particular place, and leaves one struck by the universality of the themes. I would imagine this accomplished that at one time, but I'm not sure how relevant it feels in the 21st century.

The title refers to an American, Newman, a fabulously wealthy businessman living in Paris and mixing with the French elite in the 1870s. He falls in love with Claire de Cintre, a young widow born of the Bellegarde's, an aristocratic old French family. He courts and becomes engaged to her before her mother and brother intervene to try to stop the marriage to a mere mercantilist, wealthy though he may be.

And one striking thing is how incredibly wealthy he is- he has apparently made so much money that he can live a life of leisure indefinitely.

One complaint is that the book starts with Newman in Paris, and gives very little backstory. It explains that he is of a very calm and pleasant disposition, which is actually quite important to the plot at the end, but it doesn't really explain why he is like that, which would have been more interesting.

Anyway, the book moves slowly, with long bouts of dialogue. James turns a phrase well, and there are some good descriptions of scenery, but generally I think this book deserves to have been dropped from the canon. Lots of great new books get written every year, and though we shouldn't stop reading Steinbeck just yet, I think James can be consigned to a little corner of obscure writers that were once famous.… (more)
LibraryThing member ritaer
rich man tries to penetrate Paris society
LibraryThing member BeauxArts79
I realize, now, that the tedium of James's exposition emerges from his telling us who his characters are much more than he shows us. In this case, however, his prose is much less baroque and the plot sufficiently compelling.
LibraryThing member JBarringer
This is a long novel that boiled down to a bunch of annoyingly dense, tradition-laden, foolish people making stupid choices to avoid accepting good things that they already know they want to accept. If the characters weren't so dumb, the book would have been a novella or a short story, and far more likable.
Fewer