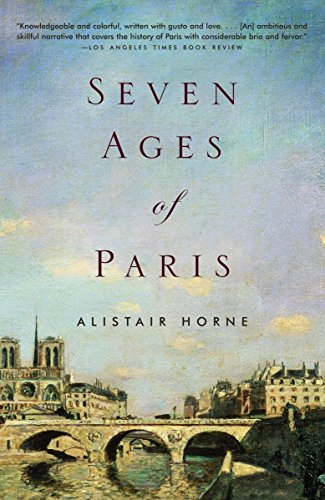 Acclaimed by the Guardian as 'an inspirational work of scholarship and love', this is a new history of one of the greatest cities in the world by one of the foremost historians of France.In this wonderfully readable book, Alistair Horne tells the huge and romantic story of Paris through seven ages of turmoil and change: the Middle Ages, the 100 years war, the Paris of Louis XIV, the age of Napoleon, the Commune, the Empire days of Louis-Napoleon and Eugenie, and the First World War and De Gaulle. Interweaving historical narrative with telling detail, this is a fluent and definitive work of social and cultural history. 'The best book I have read on Paris in a long time' Gregor Dallas, BBC History Books of the Year 'Reading Seven Ages of Paris is like taking an exciting trip in a French balloon' Antonia Fraser, New Statesman Books of the Year 'Provides not only a panorama of the capital, but also a well-crafted history of France with a nice balance between broad overviews and engaging episodes and details' Jonathan Fenby, The Times… (more)

LibraryThing member justine
I loved this book so much. I only wish I had read it before either of my trips to Paris. The city is amazing, but I think knowing it's history would have made it more meaningful. Especially since that history is insanely fascinating.
8 more
LibraryThing member cmbohn
Themes: civilization, war, government, religion, politics, city development, art, architecture, royalty

The author starts by saying that every city is like a person, and Paris is definitely a woman. Like any fascinating woman, she is changeable and captivating. I'm not entirely sure this conceit works, but it's not a bad way to start off the book.

Here's what works: I could certainly feel the amount of research that must have gone into this book. I'm sure it was staggering, and it shows. The author is obviously really familiar with all the key people, places, and ideas. And I liked being able to link things together. For the first time, I really got a sense of how all those Louis's fit together and exactly who Cardinal Richelieu was.

What didn't work: Really, it was too much. I was overwhelmed. Some of that may have been my fault, for trying to read the book straight through, without putting it down for very long, but I was afraid I would lose my place, so to speak, if I set it down. So I pushed through and it got to be confusing.

Personal feelings: I was actually glad to see that the writer sort of skimmed through the French Revolution. It became just one of a series of revolts occuring in the capital, and rather than go into all the disgusting violence in a lot of detail, he just hit on a few things, especially how it affected the look of the city itself and the economy. I read The Lost King of France last year and that one had gory detail piled upon detail of dismemberment, torture, and so on, until I couldn't wait to put it down. This book spared me all that, and I was glad. But if you are interested in the history of France primarily during the French Revolution, this is probably not a great book for you.

My other observation is probably not the author's fault, but the publishers. This is the kind of book (or I am the kind of reader, I don't know which) where you need some more maps and illustrations and so on to figure out what's going on. Instead of having them throughout the text, there are a few pages of color pictures and a few pages of black and white pictures, and that's it. I would have liked at least a black and white picture of all the major monarchs and landmarks. He assumes that you know what Paris looks like, but I only know what I've seen in books and movies. But like I say, that may be the publisher. They seem to be very picky about how many pictures they will include.

Overall: I enjoyed this book, somewhat, but I came away with the strong impression that I am EXTREMELY glad that I do not live in Paris, especially in Paris before 1900. It sounds like a horrible place to live for most people. Yes, there were great artists, musicians, scientists, and politicians who lived there and left their marks on the city. But most of the time, it was a miserable place to be, with plagues, fires, open sewage, constant violence, and little or no civil liberties. Various groups would be rounded up for whatever reason - heresy, political unrest - and summarily executed or tortured. I know this went on in most of the world, but wow, I got really tired of reading about it page after page. I debated between 2.5 stars and 3, but I decided to round up, because I think the author did a pretty good job. It's just that I found the subject rather grimmer than I expected.… (more)
LibraryThing member piefuchs
I read this book on the chunnel on a the way to spend a week in Paris - this was a wonderful choice. In a rather short book the author surveys the rich history of Paris from Roman times to the '68 riots. Wonderfully written and highly readable. Don't leave for Paris without it.
LibraryThing member SuinOz
This history of Paris reads like a novel, full of character who I fell in love with and wanted to spend more time with. It is one of those few books that as soon as I got to the last page, I wanted to start at the beginning again.
LibraryThing member mgaulding
I enjoyed this book. However, there were portions of it that were much easier to get through than others. I was somewhat familiar with the periods of Louis X through Louis XVI and I found I was much more involved in the book during these "ages." However, when they got to the World War I and World War II and post World War II I found it more difficult to keep up. The Vichy/Petain characters were a bit of a muddle for me reading. This is not to say that I didn't enjoy the entire book immensely. I just think the more you know about French/Paris history before reading this book then the more compelling this book will be. It is very detailed considering the range of time that it encompasses, yet it still continues to keep you interested.

Great book and very thorough and educational although I suspect the readers that will appreciate this book the most are those who already have a good basic knowledge about Paris and her history.… (more)
LibraryThing member AlCracka
This book is sick. It amounts to a history of France, but Horne stays focused on the real Paris, as it was and as it is, in a wonderful way, while providing awesome insight into the character of Parisians and of France in general. It's an awesome book.

I was reminded of fellow Goodreader F1Wild, who doesn't like military history. I don't either, so I was psyched that Horne breezes by military affairs, while giving much more shrift to art, literature. architecture, fashion, and the rest of what makes society.

And Jennifer will be pleased to hear that the epilogue focuses on Père Lachaise Cemetery, which has so many important people in it that it's basically like a history of Paris unto itself.

Totally readable, exquisitely researched, gossipy in a good way...this is a very, very good book. I wish I'd never visited Paris without it.… (more)
LibraryThing member john257hopper
This is a wonderfully written history of Paris by a noted Francophile, one of whose previous books on the Franco Prussian war, siege and Commune I read and enjoyed several years ago. Full of colour and variety, it covers political and military history, architecture, culture and the arts, and gives a good feeling for the ebb and flow of life, at least in the latter parts. Coverage is fairly uneven, e.g. the first 1300 years occupy the same number of pages as the 20 years of the Napoleonic era; this is of course inevitable up to a point, but I would have welcomed a little more coverage of the pre-1500 period overall, and some may quibble over his choice of dates for the 7 ages (the first begins in 1180). This is a pleasure to read, but it could definitely have done with more detailed maps of the city at various stages and perhaps line drawings of buildings being described.… (more)
LibraryThing member wagner.sarah35
I truly wish I was planning a trip to Paris sometime soon, as this is the perfect book to read before exploring that famous city. Rich in history, the author provides a compelling account of how Paris evolved over the centuries into the beautiful city of today. Going back to its ancient roots and delving to details like fashion, culture, and even its most famous cemetery, this is a great read on Paris and France as a nation.… (more)
LibraryThing member tuke
This book is a real mediocrity. I'm living in Paris for a few months, so it seemed only reasonable to read a book that is a "history of Paris." Well, this isn't it. What this is, is a history of political events in France, and the impact of those events on the rulers of Paris, and, to some extent, the ordinary middle-class and poor. You learn very little of the changes in the governmental structure, the organization of the food supply, the periods of architectural change -- isn't that what a history of a city would tell you about? Instead, the author manages to pack in every bit of gossip he can imagine about the monarchs and generals. We read that Henry IV smelled bad but had many lovers. I suppose that's interesting. We only learn of the architectural style associated with his reign in passing.

If you just want an old-fashioned political history of France, centered on Paris, with very little nuance regarding societal structure, this book may be for you. But it is thin gruel if you want to learn about the city.
… (more)
Fewer

Citizens : a chronicle of the French Revolution by Simon Schama
London the biography by Peter Ackroyd
The Judgment of Paris: the revolutionary decade that gave the world Impressionism by Ross King
Paris to the moon by Adam Gopnik
A Traveller's History of Paris by Robert Cole
1 more
Barcelona by Robert Hughes
Fewer