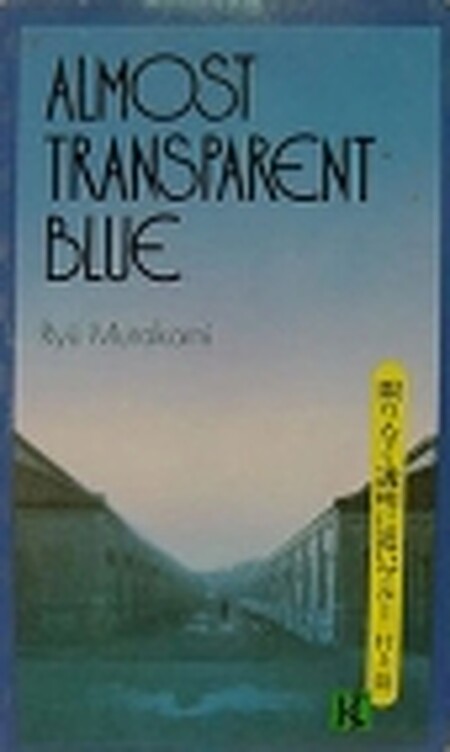 This controversial novel touched the raw nerves of the Japanese and became a million seller within six months of publication. It is a semi-autobiographical tale of the author's youth spent amidst the glorious squalor of sex, drugs and rock 'n' roll in 1970s Japan. Almost Transparent Blue is a brutal tale of lost youth in a Japanese port town close to an American military base. Murakami's image-intensive narrative paints a portrait of a group of friends locked in a destructive cycle of sex, drugs and rock'n'roll. The novel is all but plotless, but the raw and

LibraryThing member Banoo
'You're always trying so hard to see something, just like you're taking notes, like some scholar doing research, right? Or just like a little kid. You really are a little kid, when you're a kid you try to see everything, don't you? Babies look right into the eyes of people they don't know and cry or laugh, but now you just try and look right into people's eyes, you'll go nuts before you know it. Just try it, try looking right into the eyes of people walking past, you'll start feeling funny pretty soon, you shouldn't look at things like a baby.'

One of the few quotes I could find that didn't deal with vomit, semen, spit, bleeding orifices, throbbing protuberances, sweat...

One word sums up this book... yucky
Did I like it? oh yeah

There is no plot. Things just happen. Many, many things happen. Some things best left unsaid here. Think Kawabata... now imagine his complete opposite. This was Ryu's first book. It was awarded the Akutagawa Prize. Not for the moral majority or minority or anyone with morals at all.

'... a charred body is one thing you don't ever want to see, you know, it's really bad.'… (more)
12 more
LibraryThing member idyllwild
I've read this twice, the first time when I was younger than the protagonist and the second time when I was older (both times, /- 1 year). I love this book, but it nauseates me. Part of why it's so intriguing is that it conflates desire and nausea, the things that should be gross with the things that should be beautiful, and you're never sure quite where you stand. The writing is excellent and dense; it feels like much longer than 126 short pages.… (more)
LibraryThing member mich_yms
The storytelling was indeed ‘violent’, in so many different ways and levels. On one end of the spectrum, the things that were happening within the story were violent. Sex and drugs, even when they are by themselves, are rarely subtle. But when huge quantities of both are mixed together within a single bowl, the result is an overdosage of violence.

But as if that wasn’t enough, even the prose was violent. Just reading the book itself, I felt like I was being pushed and shoved in all directions. Sometimes I felt suffocated, and there were moments when I felt like my whole body was slammed against a wall.

There are still so many aspects of this book that I do not understand. But rare is a book that repels and intrigues me at the same time.… (more)
LibraryThing member poetontheone
Mishima-esque nihilism, utilizing ugliness instead of beauty, swirled with pseudo-Bataillean transgression. The language and imagery of this book is equivalent to a clogged garbage disposal in a filthy sink, and Murakami somehow makes it almost beautiful. Plotless, meandering, and at times so disturbing that it is difficult to go on reading. Definitely of interest to readers of contemporary Japanese Literature. Quite similar thematically to a more recent work by Hitomi Kanehara, entitled Snakes and Earrings.… (more)
LibraryThing member amerynth
I wasn't a fan of Ryu Murakami's "Almost Transparent Blue," a story about a bunch of junkies in 1970's Japan. It wasn't the graphic sex and rampant drug use that bothered me... I've read plenty of books filled with those activities before. It's that it seemed to be written to simply be provocative without going anywhere. It didn't have a story arc or a plot really... it's all there to shock and amaze.

I am shocked and amazed, actually, that someone thought this needed to be on the list of 1,001 books to read before you die. I could have done just fine without it.

I would highly recommend reading Irvine Welch's "Trainspotting" instead for a book about drug culture that has a lot more literary value.… (more)
LibraryThing member azfad
Humourless, pretentious and rigidly of-its-time. May be shocking to some but - i'm too old for this shit. Not badly written tho and some of the scenes are described vividly.

and i got a hard-on at one point so thats good.
LibraryThing member TakeItOrLeaveIt
I read this within 24 hours. This aloof coming of age novel could be devoured in a sitting. A counter-culture piano player who is endeared by everyone he comes across screws and snorts and shoots up in a wasteland of post-Vietnam Japan. I'm a fan of the japanese coming of age story but here, Ryu plays an interesting trick on the genre. Maintaining the sheepish detached 'tragic hero' who is constantly in the middle of horror he splices it with a jaded sense of withdrawal. The third part of this jaunt has a Sanshiro by Soseki feel more than the other bits of degradation and quietism. Clearly to be enjoyed by self-proclaiming existentialists.… (more)
LibraryThing member whitewavedarling
There is beauty and grace in much of the language here, but beyond that, it didn't draw me in. My best description is that this is like a mix of Waiting for Godot and Jesus' Son. It has little (or no) plot, and wanders with characters that, however vivid and crude, don't have much depth or connection to readers. In subject, I have to compare this to Jesus' Son, but there's a fatal difference: in Johnson's narrative, however focused on drugs it may be, you have a thoughtful and interesting narrator pulling the "novel" together into a story that amounts to something quite a bit more meaningful than just random drug experiences and philosophical comments. Murakami's novel is missing the philosophy and the interesting narrator. As a result, this seems like something of an exercise in crude wanderings of violence, sex, and drug use. Perhaps it's an interesting experiment in much the way that Becket's Waiting for Godot succeeds, but it didn't work for this reader. I wanted more, though I enjoyed the grace and rhythm of the language at many points.… (more)
LibraryThing member AHS-Wolfy
An almost stream of consciousness account of a sex and drug fuelled passage in time of a group of young Japanese late-teens/early twenty-somethings. We follow their hedonistic lifestyle of partying hard and the subsequent crash and burn of the comedown afterwards. There is no plot and definitely no moralistic standpoint either. There are, of course, moments of introspection for the almost detached protagonist that we follow along with but you are never quite sure how much his vision is clouded by the degenerate lifestyle he leads.

An award winning début novel that is a very short and quick read. Not one I could recommend due to the subject matter and gratuitousness of the content. Not my favourite of those that I've read so far from the other Murakami but far and away not the worst.… (more)
LibraryThing member LittleKnife
I enjoyed the vivid portrayal of moments and the activity. That said, I can imagine that the disjuncture would get irritating unless you were already a fan of similar things. The drugs and sex are tiring but of course thats the deliberate disaffection of the style and era of writing. Its not pleasant, fun nor, unfortunately, exciting but it is well written and manages to draw you in. I do wish I could read it in the original.… (more)
LibraryThing member heavy-hannu
Violent burst full of sex, drugs, violence and rock. Hits like fist straitgh to face, If you like Hunter S. Thompson, you got to read this. After reading it I felt empty and... yes, almost transparent blue.
LibraryThing member macha
nihilist novel about late-60s drug culture in Japan among the young, graphic and pretty stark, but not uninteresting because of the significance of the setting and the unflinching focus of the narrative.
LibraryThing member SqueakyChu
This is such a strange book. Ryu, a nineteen-year-old Japanese man, and his assorted friends, do drugs and engage in all sorts of sexual interchanges with each other and enter into periodic bouts of violence with others when out and about. Relief came for me in a few scenes: the one of the rain, the one of the policemen raiding the apartment, and the few with conversations between Ryu and Lilly. Other than that, I found this book hard to read. I wanted to race through the book to be done with it quickly, but then I had to pause and laugh at this line recited by Ryu's female friend Reiko: "…I’m sick of just fucking, I think there must be something else, I mean, some other ways to have fun." By reading this book quickly, though, I was able to feel the tempo of it and not so much have to deal with what it really might mean. I'd advise others to also read the book this way.

The ending of the book was way over the edge. It made me go, "Whoa!" Someone, please, explain to me what happened!… (more)
Fewer