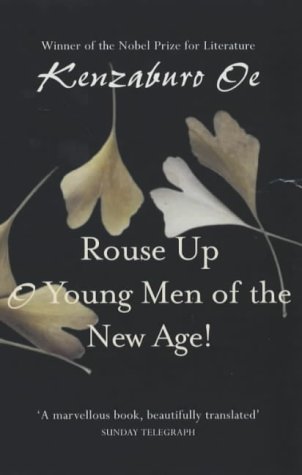 Rouse up o young men of the new age!

"K is a famous writer living in Tokyo with his wife and three children, the oldest of whom was born with a brain anomaly that has left him mentally disabled. A highly cerebral man who often retreats from real life into abstraction - in this case, the poetry of William Blake - K is confronted by his wife with the reality that this child, Eeyore, has been saying and doing disturbing things - behaving aggressively, asserting that he's dead, even brandishing a knife at his mother. As the days pass, various events - K's hapless attempts to communicate with his son, Eeyore's near drowning during a father-son trip to the swimming pool, a terrible hurricane that nearly destroys the family's mountain cottage and the family inside it - K is forced to question his fitness as a father." "K reconsiders his own life - his relationship with his father, his rural upbringing, his relationship with a well-known dissident writer who committed suicide, the responsibilities of artists and writers in Japan generally. In the end, in part through his obsessive rereading of Blake, K is able to see that things are not always what they seem, especially where his son is concerned, and to trust his heart as well as his mind."--BOOK JACKET.Title Summary field provided by Blackwell North America, Inc. All Rights Reserved… (more)

LibraryThing member colinflipper
I came to read ‘Rouse Up O Young Men of the New Age’ after being completely blown away by Oe's novel, ‘A Personal Matter’. Both books concern the nearly autobiographical subject of a man dealing with the dilemma of a mentally disabled son. In ‘A Personal Matter’, the narrator is young and child is newborn, and the story felt more heavily emotional. The narrator of ‘Rouse Up O Young Men…’ approaches his dilemma in a scholarly and philosophic way, using William Blake as his guide.

In both books, I was greatly attracted to the precise, almost expository, writing style. I don't know how much of this should be attributed to John Nathan, who translated them to English.… (more)
2 more
LibraryThing member vpfluke
This was an excellent novel. This is an autobiographical tale that interweaves the story of the author's son who has brain damage with musings on the poetry of William Blake. The father tries to show that raising his son requires special intuition that he sometimes can give, but needs insight from other sources. There are memories of the author. being caught in a constricted section of favored water hole and being saved by his mother. Then his son is saved from drowning at city gymnasium pool by a person of questionable politics. The son is nicknamed Eeyore, the melancholy stuffed animal from Winnie-the-Pooh. Oe has ruminations on life and politics, and his literary travels, but he is always thinking of his son. For a section M, who is probably Yukio Mishima, has an intense although silent presence. Eeyore lives his life a little strangely, if not obliquely, but he comes to the fore in his ability with playing and even composing music. The novel has a rather satisfying resolution at the end, but I don't want to hint at it.… (more)
LibraryThing member Samchan
I picked this book up on a whim after reading about it on one of my favorite book blogs and being drawn to its poetic title (from a work by William Blake). This was my introduction to Nobel Prize winner, Kenzaburo Oe. I’m not going to be able to do justice to this book, but still wanted to capture my thoughts on it. The book is about a father, a writer, who tries to write up a dictionary of all that his mentally-handicapped son needs to know about life. All throughout, he meditates on the ways in which his interpretations of William Blake’s works illuminate his understandings of the father-son relationship, death, his own childhood, human communication and connection. It feels like an intensely personal memoir (and indeed there are elements, we’re told by Oe’s translator, that are taken from Oe’s life), diary, and literary analysis all at the same time. I wasn’t so much interested in the parts on Blake’s poetry and indeed, most of it went over my head. Yet, what kept me turning the pages was the father’s recounting the experience of parenting a handicapped child, the difficulties, the fears, but also the joys—never in a trite, overly maudlin way. Apparently this theme is one that runs through many of Oe’s other works, and thanks to this book, I’m eager to explore this father-son relationship further. It’s a quiet book, often esoteric and boring in parts, but deeply moving.… (more)
Fewer

Nip the Buds, Shoot the Kids by Kenzaburo Oe
Teach us to outgrow our madness by Kenzaburo Oe
Kokoro by Natsume Soseki
Beauty and Sadness by Yasunari Kawabata
The housekeeper and the professor by Yoko Ogawa
3 more
Botchan by Sōseki Natsume
Shipwrecks by Akira Yoshimura
Naomi by Junʾichirō Tanizaki
Fewer