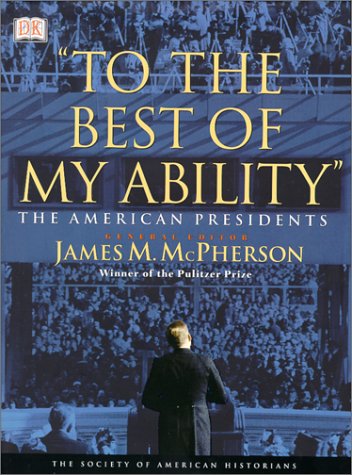 "To the best of my ability" : the American presidents

Every generation of historians reviews and revises the work of its predecessors. With this book, the best historical writers of today's generation undertake such a task. Displaying wit and narrative flair, their elegant essays offer a fresh perspective on the most fascinating group of Americans: the American presidents. Who better to write a new assessment of the presidents than the most respected (and best-selling) historians of our time? In To the Best of My Ability: The American Presidents, members of the prestigious Society of American Historians deliver engaging, thoughtful analyses of the forty-one men who have led this country- some, of course, more successfully than others. In this copiously illustrated volume, edited by Pulitzer Prize-winner James M. McPherson, you will learn from Gordon S. Wood how George Washington, an extraordinary man, made it possible for ordinary men to govern; from Allen Weinstein how Theodore Roosevelt tested and extended the limits of the presidency; from Tom Wicker how Richard Nixon's hatreds and insecurities gripped him ever more tightly as he achieved his long-sought goal of power; and from Evan Thomas how much Bill Clinton cares about his place in the new presidential pecking order.… (more)

LibraryThing member DBJones
A great introduction to the men who have held the office of President of the United States. Some great biographers have contributed to this book and it is a great reference guide. The main details and events in the life of each President are listed and when you are finished you will want to go out and find more information about each man.… (more)
1 more
LibraryThing member regularguy5mb
I decided recently to devote some serious time to studying the politics of my country, having just a casual interest in the past and some very solid opinions that may not have been one hundred percent informed, or at least not as informed as I would like, so I immediately started searching through my local library and decided to start with this book.

And I have to say, I know how to pick 'em. This is an excellent reference book that contains well-researched biographies on each President up to Clinton (the book being published in 2000). Pherson has pulled together some heavy-hitters to write each bio and includes a wealth of major events that occurred during each presidency. Also included in the back of the book are breakdowns of each campaign and each President's inaugural address.

I learned so much from this book and will definitely be picking up a copy for my own library as soon as possible. Also, it's left me ready to learn more.… (more)
Fewer

Lincoln by David Herbert Donald
American sphinx : the character of Thomas Jefferson by Joseph J. Ellis
The Promise: President Obama, Year One by Jonathan Alter
The Rise of Theodore Roosevelt by Edmund Morris
Theodore Rex by Edmund Morris
5 more
The years of Lyndon Johnson. [Volume 3], Master of the senate by Robert A. Caro
Means of ascent by Robert A. Caro
The presidents : a reference history by Henry F. Graff
The first American : the life and times of Benjamin Franklin by H. W. Brands
Truman by David G. McCullough
Fewer