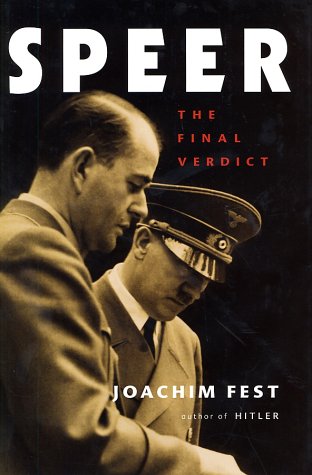 An unemployed architect when Hitler came to power in 1933, Albert Speer was soon designing the Third Reich's most important buildings. In 1942 Hitler appointed him Armaments Minister and he quadrupled production, an astonishing achievement that kept the German Army in the field and prolonged the war. Yet Speer's life was full of contradictions. The only member of the Nazi elite with whom Hitler developed more than a purely functional relationship (he has even been called "Hitler's unrequited love"), Speer was always an outsider in Hitler's inner circle. He saw himself as an artist, above the crass power struggles of the roughnecks around him, but his enormous ambition blinded him to the crimes in which he played a leading role. Brilliantly illustrated, this gripping account of one man's rise and fall helps explain how Germany descended so far into crime and barbarism.… (more)

LibraryThing member John
Speer: The Final Verdict is a very good book. Joachim Fest (who died late in 2006) was one of the most acute observers and analysts of Nazi Germany and of Hitler in particular, and in this book he turned his talents to trying to understand the enigma that was Albert Speer: how did an urbane, sophisticated, rational, educated, solidly middle-class individual fall under the sway of Adolf Hitler and basically sell his soul in supporting the Nazi regime? If Hitler had any one "friend", it was Albert Speer. They spent a lot of time together dreaming and planning the architectural wonders the would redefine Germany, and particularly Berlin, to reflect the glory and power of the Third Reich; all this before Speer became a minister responsible for armament production and, at one point, virtual control of all economic production. Fest argues that this "strange and unique relationship" provides the key to understanding Speer's life.

"The unlimited opportunities Hitler offered him, the preferred position within his entourage combined with the ambition of a wooed vassal, blinded him to anything outside his own sphere. Human consideration was one casualty. Speer's indifference was reinforced by his admiration for the "mover of the world" as he call Hitler in one of his extravagant moods."

For Fest, Speer's most striking characteristic was a "lack of resolution, of knowing where he stood, and of passion. In a character such as his there was no room for principles." Speer insisted on the distinction between the political and private, or even the artistic spheres to which he felt he belonged; political events did not concern him; he was openly critical of Hitler's violent followers as opposed to those like himself who he thought were "more typical" of the other side of the regime, of those "whose idealism and devotion sustained Hitler". This "self-appeasement" may have served Speer well in balancing his life, but as Fest asks, "Where was the difference" between the two sides?

Fest has some good turns of phrase, for example, when he describes the "law of self-radicalization" that governed the regime and led it into increasingly extreme behaviour and actions. Also, Hitler's "psychology of embitterment" that made him refuse to establish a reserve position behind the eastern front at Stalingrad because he argued that the more hopeless the situation, the more stubbornly the forces would resist. This was further reflected in Hitler's belief that the loss of the war proved the unworthiness of the German people and his determination to utterly destroy the country through his own scorched-earth policy. This was Speer's greatest moment, and one where he did show adherence to strong principle, by dedicating himself to thwarting Hitler's objectives to the extent of ignoring and countermanding direct orders. The chaos of the closing weeks of the war, with Hitler hunkered down in his Berlin bunker, gave Speer some latitude, but many were shot in the last days of the war for much less serious disobedience, or even on the suspicion of being fainthearted. Fest describes all of this very well, as he does the constant political intrigues that characterized life at the centre of Hitler's world, and the ups and downs of the Speer-Hitler relationship (Speer spoke to Hitler at times in terms that no one else would have thought of doing, and if they had, they would surely have been shot). Speer worked miracles of organization as minister, but he could never win the argument about the need to put the economy on a total war footing. I was astonished to learn that despite amazing increases in munitions production under Speer's reorganization of industry, the figures were still well below those of the First World War and never reached those figures even by the end of the war!

Fest wrestles with the enigma of Speer and believed that many questions raised by Speer's life will never be resolved. He even argues that perhaps the dilemma of Speer's life, "lay in the multitude of his gifts. They were, in a sense, on call for anyone who laid claim to them, enabling Speer to perform the most diverse services, be they artistic, organizational, technical, administrative" and that this might also explain Speer's unusual ability to "live in paradoxes." Fest also sees a man who had a reputation for integrity because he was trustworthy, incorruptible and reliable, but for all that, he suffered from a "moral indifference" that made him an incomplete person.

Fest addresses two central, and related questions about Speer: was his assumption of guilt at Nuremburg an honest reflection of his feelings about the horrors of the regime of which he had been a key member and enabler, or was it calculated to avoid the rope, and what did he know about the fate of the Jews?

For Fest, "the weight of evidence about the extent of his knowledge of the crimes is indeed crushing", but it was only at Nuremburg that he was forced to face the unadorned reality of what had happened. Fest argues that, "it is surely too simple to claim that during the trial he had only paid lip-service" and had only been concerned with saving his neck.

Another positive for Speer is that for all the covert attempts at justification he undertook, the gaps in his memory and his self-delusions, he never actually tried to absolve the regime from blame. In fact Fest argues that, "the way he exposed the regime...his accounts of the degree to which everyone was out for his own advantage and of the incompetence in the leading circles, has possibly proved the most effective way of preventing any mythologizing, such as Hitler, Goring and Goebbels and other had hoped for even at the very end. That too should be taken into account when reviewing Speer's life." This stand also cost Speer some old friendships.

Fest also has some interesting thoughts on Speer as representative of a new type of man, "a man of the future–pragmatic, ambitious, without convictions." For Fest,

"No one personified more authentically the type of the stubbornly loyal, unthinking subject, dedicated to his personal ambition. By keeping aloof from politics and insisting on having done only what they saw as their ‘duty', Speer and the likes of him had made possible the establishment of the regime and the horrors it engendered."

For Fest, the true legacy of the Hitler years is that they killed the fundamental belief held since the Enlightenment that despite many checks and setbacks, the world was moving steadily toward more humane conditions. "The destructive will came from Hitler. But he would not have achieved any of his objectives without the helpers, of which Speer is but one example."

A detailed, sensitive, balanced book that addresses issues much deeper than just the life of one man.… (more)
1 more
LibraryThing member alexbolding
I read this book in Dutch which is not advisable, because of the unwieldy long sentences copied from German. Anyway the biography is vintage Fest, which means it is a psychological portrait that is thoroughly evidence-based, involving a wide variety of sources (written, but also personal interviews, Speer’s notes etc). It is probably the best of all biographies I have read of Speer (I read Gitta Sereny’s and one by Speer himself). And yet, it is a typical German product. Fest does not know how to deal with contradictory features in a personality. Whereas I see contradictory behaviour or opinions as proof we are dealing with a human being like you and me, Fest wishes to make a legalistic point about compromised morality, etc.

I think the best observations on Speer as a type have been made by Haffner, in 1944, when he wrote that Speer was the archetypical ‘technical manager’, devoid of empathy, goal-oriented, seemingly neutral and morally void or unaware. Haffner also ominously observes that the Hitlers, Himmlers and Mengele’s of this world can be found anywhere, but they will end up at the scrap heap of history. Speer, however, represents a type that will prevail and is most dangerous. I agree. It is the CEOs of our world that represent the real scum with Trump as the archetypical example. One final remark: some of the pictures included in the book, depicting Hitler and Speer on the Obersalzberg are absolutely unique and flabbergasting (one shows Hitler and Speer sitting at the extreme ends of a bench, obviously at loggerheads with each other).… (more)
Fewer

Inside the Third Reich: Memoirs by Albert Speer
The Anatomy of the Nuremberg Trials: A Personal Memoir by Telford Taylor
1889-1936 : hubris by Ian Kershaw
The Hitler book : the secret dossier prepared for Stalin from the interrogations of Hitler's personal aides by Fyodor Parparov
Hitler, 1936-1945 : nemesis by Ian Kershaw
1 more
The coming of the Third Reich by Richard J. Evans
Fewer