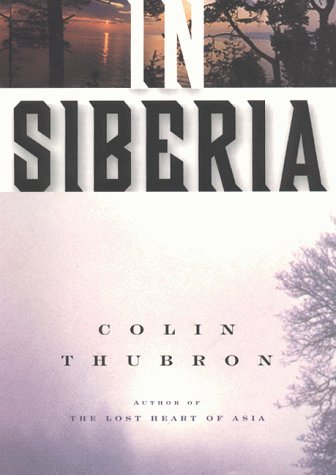 This is the account of Thubron's 15,000-mile journey through an astonishing country - one twelfth of the land surface of the whole earth. He journeyed by train, river and truck among the people most damaged by the breakup of the Soviet Union, traveling among Buddhists and animists, radical Christian sects, reactionary Communists and the remnants of a so-call Jewish state; from the site of the last Czar's murder and Rasputin's village, to the ice-bound graves of ancient Sythians, to Baikal, deepest and oldest of the world's lakes. This is the story of a people moving through the ruins of Communism into more private, diverse and often stranger worlds.

LibraryThing member dickcraig
I read this book just before a friend of mine was about to embark on a motorcycle trip across Russia, taking the Siberian route. The author paints a picture of this region of Russia that made me want to visit.
5 more
LibraryThing member ORFisHome
Depressing. It really captures the "Soviet Union" that I've seen in Belarus but goes far beyond in showing a people's suffering. You just have to be amazed at the damage that results when a nation totally rejects God. Not sure I liked the writing style.
LibraryThing member wbwilburn5
Great insights into Russian life.
LibraryThing member allyshaw
I enjoyed this book immensely. All good science fiction should read like a travelogue. The reverse should be true but rarely is-- with the exception of this book. A riveting strangeness-- looking through this mirror darkly at the "peace dividend" at the end of the Cold War makes for paradoxically giddy yet sobering reading. The book is full of wonder and compassionate alienation-- the portrait of a stark landscape and its people haunted by its Gulag'ed, Stalinist past is unforgettable.… (more)
LibraryThing member Steve38
There's no doubt about it Mr Thurbron is a good travel writer. He does the research, he takes a real interest in the places he goes, he puts in the hard yards when finding people to talk to other than the usual taxi drivers and waiters. He knows what to put in and more importantly what to leave out. We don't need to the detail of every bump in the road that some writers give us. And on top of that he knows how to describe things; people, landscapes, situations. For this book he has the real advantage that he speaks Russian. He can travel alone and reach places that would be difficult without help and local contacts and knowledge. So this is, as to be expected, an excellent book. But there is a flaw. One into which many non native writers about Russia fall. There is a fascination tending towards obsession with the Soviet period. A period of political and economic curiosity during which access to the country was limited and controlled. His travels for this book took place not long after the Soviet Union crumbled apart. In that respect a journey to inspect the still warm cadaver of the communist state is not unexpected. But it means historical perspective is lost. In search of echoes of the USSR authors, including Mr Thubron, neglect to look for the longer threads in Russian history and culture. Mr Thubron does better than most. Especially in his meetings with various native people's of Siberia who's culture was eroded not only by the peculiarities of the Soviet system but also by global changes in accessibility, travel, economic opportunity, education and lately climate. He finds fascinating corners of history such as the remote Anglican missionary post on the Russian/Chinese border which in over thirty years failed to convert a single soul. A good book. I would expect nothing less from the author.… (more)
LibraryThing member soylentgreen23
Though 'In Siberia' is about twenty years old, it is still essential reading for anyone with an interest in Russia and the country's affairs. At once a triumph of travel writing and an insightful piece of nonfiction, 'In Siberia' is a true classic - incredibly well-written, and with a sympathetic heart at its core it reveals much about the character of those living so far from Moscow, yet forever in its shadow.… (more)
Fewer