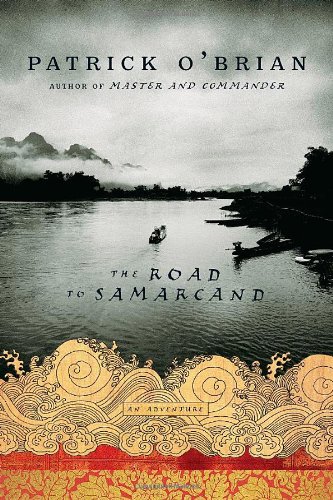 The Road to Samarcand: An Adventure

This stand-alone adventure from the mighty Patrick O'Brian begins just where his devoted fans would want it to: with a sloop in the South China Sea barely surviving a killer typhoon. But the time is the 1930s and the protagonist a teenaged American boy whose missionary parents have just died. In the company of his rough, seafaring uncle and his elderly English cousin, an eminent archaeologist, young Derrick sets off in search of ancient treasures in central Asia. Along the way, they encounter a charismatic Chinese bandit and a host of bad characters, including Russian agents fomenting unrest. The tale ends in an icebound valley with the party caught between hostile Red-Hat monks and the Great Silent Ones, which is how the Tibetans designate the yeti.… (more)

LibraryThing member lmichet
In an event that laid scars on my dignity which still exist to this day, I was once embarassed mightily in front of the man who edited Patrick O'Brian at W.W. Norton books. He is also practically thier CEO or something-- I was not made quite clear on this point. At any rate, he came to my school to talka bout a book of his, and afterwards I went up and mentioned that I had read all the O'Brien books.

At this point, the head of the creative writing program told me that she founds this to be odd and strange, and everyone present agreed with her. "You are so peculiar," they all said. The editor himself agreed. "I can't stand those books, my self," she went on. "You are very odd!" Or something like that, I can't remember exactly. But the odd thing about me is I suppose that I am a rather young woman and that I read all of those books when I was in eighth grade. Which, given the usual market for O'Brian books, I admit is a little out of the ordinary-- but nothing to embarrass me in front of respectable old gentlemen for, goddammit!

Anyway, I read Hussein, all the Aubrey/Maturin books, and left it at that. Hussein is possibly my favourite. This book is of a very different style to both the Aubrey/Maturin novels or Hussein, which is more of a fable; this is a straight-up 1950s boys' adventure story. Something for twelve-year-olds, basically, but twelve-year-olds from the FIFTIES, which calculates up to something around today's sixeen-year-olds, grammar and vocabulary-wise. However, it's written in a style and with a childish declarativeness that no sixteen-year-old American boy could enjoy unless they are a rather forgiving and voracious reader. The boy in the book, Derrick, has a loyal dog, a sea-captain uncle, is an orphan, has a loonily lovable Oxford-type professor-cousin, travels about with a pack of adventuresome pals from a variety of national backgrounds, gets to shoot guns, gets to ride in a tank, gets to ride in a helicopter, gets to defeat Russian spies-- in other words, he gets to do everything any twelve-year-old could possibly want, thus making this the archetypical boy-story of all time.

Nowhere near the quality of the Aubrey/Maturin books, or of Hussein, which I consider a masterpiece of storytelling-- but good enough. But the way this book was marketed is a little odd-- it's got a sober, adult cover, has nothing on it at all to suggest it to children, would scarcely serve to entertain today's children anyway (the vocabulary would be tough for a kid young enough to appreciate the storyline), and has some dull, plot-revealing blurb copy on the back. Bah. Obviously, the only people who can be relied upon to buy this book are the O'Brian nuts, the middle-aged men who read his books when they were coming out all last century. It's marketed to them. I hope they'll enjoy it. It's a jolly little tale.… (more)
4 more
LibraryThing member Bridgey
The Road to Samarcand - Patrick O'Brian *

Have only read one O’Brian novel before, [Master and Commander]. Fairly enjoyed that so starting reading the road to Samarcand after seeing it on sale in a bookshop.

I have to be honest and say that I could not finish the book, it was awful. Usually no matter how bad a book is I struggle through to the end, but after 5 nights and only 69 pages I eventually put it to one side.

The story is so full of annoying characters that I just couldn’t go on any longer. There is a scholarly absentminded professor, a hired help who says the work Ay every few words and Chinese cook who has a broad knowledge of the English language. He is the worst, with every sentence he speaks in a disjointed mixture of forced grammar.

I hated it…. Can’t say more than that. Think this will be my last book by the author.

As far as I could tell, the plot is set in around 1950’s china (although you wouldn’t think it with all the horseback fighting etc). Derrick visits his elderly cousin who is a professor of archaeology via his uncles sailing ship. The Chinese cook makes many references to ‘learned scholar’. They go to look at some remains of a building against the advice of locals etc, and get kidnapped…. Then I threw it away.… (more)
LibraryThing member noblechicken
Pretty fast and ready teen read, probably more approachable for those who didn't want to get bogged down in O'Brian's more seafaring every detail described works. As in the review below states, released in England a long time ago, now available here. Fans of Mowll's Guild of Specialist series will definitely like this! Action-packed fun.… (more)
LibraryThing member LilithDarville
Good read; great adventure. Wonderful characterization. Worth the read.
LibraryThing member aliciamalia
This is a perfect summer read - fairly short, action-packed scenes, lots of emotional depth, and fascinating characters. I've never actually read any Patrick O'Brian novels before, and plan to pick up a few more. This was published in England in 1954, but is only now being released in the U.S.
Fewer