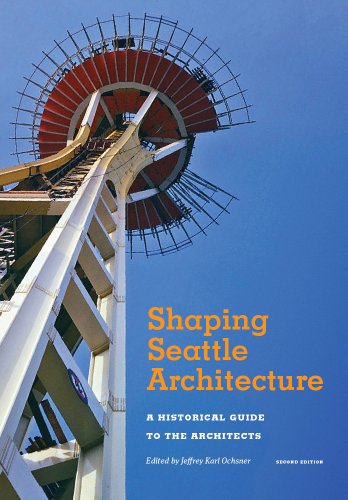 Shaping Seattle architecture : a historical guide to the architects

Seattle’s growth has been remarkab≤ from a population of only 3,500 in 1880 the city grew to over 500,000 in 1990, and the Puget Sound region exploded to a population of nearly three million. This book focuses on those whose design shaped the physical form of the city and region. Forty-five generously illustrated profiles of architects and firms provide an overview of Seattle’s architectural history as well as a hand reference guide to the life and work of these designers. Jeffrey Ochsner’s introductory chapter summarizes the main currents of Seattle’s architectural history, relating it both to the city’s history and to national and international trends in architecture. Three special essays, focusing on the region’s Native American architecture; on the impact of pattern books, plan books, and periodicals; and on "vernacular" and "popular" architecture--ordinary structures often built without the participation of professional designers--are valuable additions to the book. Only architects no longer actively practicing are included in the individual profiles, but an appendix providing over eighty thumbnail sketches of additional significant Seattle architects and the works for which they are most noted does include recent AIA-Seattle Medal winners. Non-Seattle architects who designed major Seattle structures are listed separately. Another appendix lists the extant buildings mentioned in the text, along with their current names and addresses, including buildings across the Northwest and elsewhere. Sections on sources of information and on researching Seattle architecture provide suggestions for finding out more about a particular architect, building, or project. Among those architects and firms featured are Mother Joseph (Esther Pariseau), Elmer Fisher, John Parkinson, Kirtland Cutter, Ellsworth Storey, Arthur Loveless, Robert C. Reamer, Lionel Pries, Elizabeth Ayer, Fred Anhalt, Paul Thiry, Paul Kirk, Roland Terry, and Victor Steinbrueck. Certificate of Recognition awarded by AKCHO, Association of King County Historical Organizations, May 1995 Award of Merit presented by Washington Trust for Historic Preservation, October 1995… (more)

A guide to architecture in Washington State : an environmental perspective by Sally Byrne Woodbridge
Classic houses of Seattle : high style to vernacular, 1870-1950 by Caroline T. Swope
Carl F. Gould : a life in architecture and the arts by T. William Booth
Alaska-Yukon-Pacific Exposition : Washington's first world's fair : a timeline history by Alan J. Stein
The Seattle bungalow : people and houses, 1900-1940 by Janet Ore
14 more
Kirtland Cutter : architect in the land of promise by Henry C Matthews
Seattle, now & then by Paul Dorpat
Seattle cityscape by Victor Steinbrueck
Tom Kundig : houses by Dung Ngo
Northwest style : interior design and architecture in the Pacific Northwest by Ann Wall Frank
Built by Anhalt by Steve Lambert
294 glimpses of historic Seattle, its neighborhoods and neighborhood businesses by Paul Dorpat
Seattle, past to present by Roger Sale
The Tall Building Artistically Reconsidered: The Search for a Skyscraper Style by Ada Louise Huxtable
The Stimson legacy : architecture in the urban West by Lawrence Kreisman
Primitive Architecture (History of World Architecture) by Enrico Guidoni
The New Washington : a guide to the Evergreen State by Howard McKinley Corning
The future remembered : the 1962 Seattle World's Fair and its legacy by Paula Becker
What is Japanese Architecture? by Kazuo Nishi
Fewer