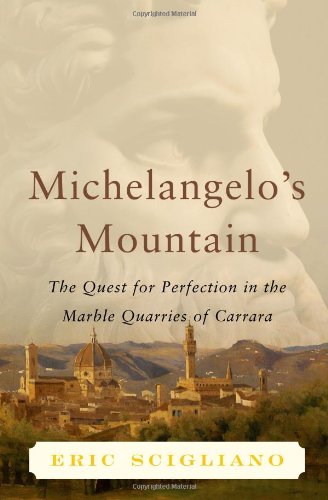 Michelangelo's Mountain: The Quest For Perfection in the Marble Quarries of Carrara

No artist looms so large in Western consciousness and culture as Michelangelo Buonarroti, the most celebrated sculptor of all time. And no place on earth provides a stone so capable of simulating the warmth and vitality of human flesh and incarnating the genius of a Michelangelo as the statuario of Carrara, the storied marble mecca at Tuscany's northwest corner. It was there, where shadowy Etruscans and Roman slaves once toiled, that Michelangelo risked his life in dozens of harrowing expeditions to secure the precious stone for his Pieta, Moses, and other masterpieces. Many books have recounted Michelangelo's achievements in Florence and Rome. Michelangelo's Mountain goes beyond all of them, revealing his escapades and ordeals in the spectacular landscape that was the third pole of his tumultuous career and the third wellspring of his art. Eric Scigliano brings this haunting place and eternally fascinating artist to life in a sweeping tale peopled by popes and poets, mad dukes and mythic monsters, scheming courtiers and rough-hewn quarrymen. In showing how the artist, land, and stone transformed one another, Scigliano brings fresh insight to Michelangelo's most cherished works and illuminates his struggles with the princes and potentates of Carrara, Rome, and Medici Florence, who raised intrigue to a high art. He recounts the saga of the David, the improbable masterpiece that Michelangelo created against all odds, of the twin Hercules that he tried to erect beside it, and of the Salieri-like nemesis who snatched away the commission, turning a sculptural testament to liberty into a bitter symbol of tyranny and giving Florence the colossusit loves to hate. Scigliano plumbs the Renaissance archives, uncovering previously unpublished and untranslated documents, and trolls the earthy cantinas of Carrara, where old cavatori who wrestled giant blocks from the mountains by hand recount the miseries and glories of a vanishing heroic age. He takes readers along with another sojourner, the exiled poet Dante Alighieri, who drew his visions of Hell and Purgatory partly from the surreal panorama of Carrara's quarries. Interweaving art, architecture, science, politics, folklore, and even quarry cuisine, he traces the mystique of marble and the magic of the stone carver's art from prehistory to the present, and shows how they culminate in the triumph and tragedy of Michelangelo's Pygmalion-like quest to bring life out of stone. - Publisher.… (more)

LibraryThing member Gold_Gato
"...the closer you see paintings approach good sculpture, the better they will be; and the more sculptures will approach paintings, the worse you will hold them to be."

Michelangelo was obviously scultore, the Sistine Chapel not withstanding. This book covers the whole spectrum vis-a-vis this great Renaissance artist, from his personal life to his works to his obsession with the perfect block of marble. Michelangelo felt the only place he could find the perfect stone was in the quarries of Carrara, so we also get a full history of this town which has produced the finest white marble since antiquity.

You must listen to the stone

The author has quite a task to perform, as there are so many different facets to this story. Yes, we learn about the artist and the quarry, but we also get some nice history on the Medici, various Popes, sculpture, Florence, Rome, WWII, and anarchy. I felt the book became more enthralling as it came toward the end, with Carrara once again becoming a central point.

The ability to take a block of stone and then to chip away to find the life within is simply amazing. How sculptors do it is beyond me. I never talk to a painting, but whenever I walk past the garden outside the Houses of Parliament, I always say "hello" to the Burghers of Calais. After reading this book, I now understand why.

Michelangelo & the Pope's ceiling by Ross King
The ransom of Russian art by John McPhee
M : the man who became Caravaggio by Peter Robb
The Judgment of Paris: the revolutionary decade that gave the world Impressionism by Ross King