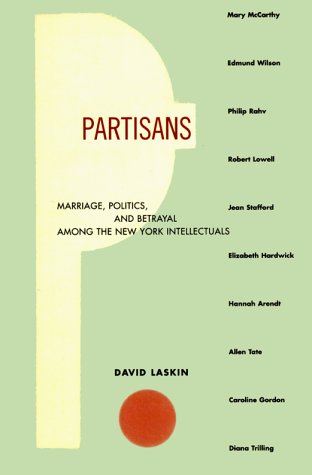 Partisans: Marriage, Politics, and Betrayal among the New York Intellectuals

"From the Depression era of the 1930s through the Vietnam War of the 1960s, a generation of "public intellectuals" thrived in America. They were poets, novelists, critics, and commentators who were also friends, rivals, spouses, and lovers. Their personal relationships were as passionate as their writing. In their poems, novels, and essays they debated one another while producing work that was brilliant and often controversial. Among them are such influential writers as Mary McCarthy, Edmund Wilson, Robert Lowell, Elizabeth Hardwick, and Hannah Arendt." "While the pages of Partisan Review were a forum for political and intellectual controversy, its offices were a hotbed of gossip, intrigue, back-stabbing, and sex. Possessed of enormous ambition, talent, and appetite, the PR circle was an intense, self-enclosed society where creative energy often gave way to self-destructive impulses, alcoholism, and adultery. For women of talent, beauty, and ambition, this literary circle offered unprecedented professional opportunity but also exacted a terrible emotional price." "Amidst all the turmoil - or perhaps because of it - this brilliant circle continued to produce important work, from McCarthy's scandalous novel The Group to Arendt's Eichmann in Jerusalem, which caused a firestorm of controversy." "Written with keen insight into both the literature and the personalities behind it, Partisans is an illuminating portrait of a time when politics and poetry were all-consuming passions."--BOOK JACKET.Title Summary field provided by Blackwell North America, Inc. All Rights Reserved… (more)

LibraryThing member SeriousGrace
This is like a good gossip story. At the center are six women who ruled their lives without thought of public image or reputation. They were writers who lived before the age of feminism and railed against its confines. It was a compliment to be told "you write like a man." They were allowed to have egos, be promiscuous, vicious, betraying...all without a second thought. If feminine wile got you somewhere, so much the better. These were the New York Intellectuals who slept with men indiscriminately, married or otherwise. At their center is the Partisan Review and everyone who was associated with the magazine. Probably the best known, Mary McCarthy sleeps with the editor of PR before marrying writer Edmund Wilson. Then there's Jean Stafford who wrote for PR while married to Robert Lowell. When the two divorced Lowell went on to marry another PR insider, Elizabeth Hardwick. Allan Tate was married to Caroline Gordon but had an affair with Elizabeth Hardwick. Are you keeping track? Other intellectuals include Hannah Arendt and Diane Trilling. They had their own dramas as well.… (more)

inscribed to David by author

Intellectuals by Paul Johnson
Kafka was the rage : a Greenwich Village memoir by Anatole Broyard
Isaiah Berlin : a life by Michael Ignatieff
Women of the Beat generation : the writers, artists, and muses at the heart of a revolution by Brenda Knight
A Chance Meeting: Intertwined Lives of American Writers and Artists by Rachel Cohen
2 more
Robert Lowell: Setting the River on Fire: A Study of Genius, Mania, and Character by Kay R. Jamison
Memoirs of Hecate County by Edmund Wilson
Fewer