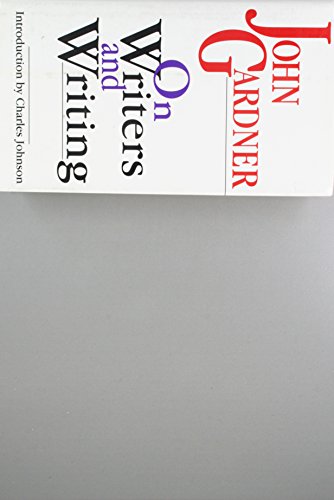 On Writers and Writing

"All my life," John Gardner wrote, weeks before his death in a motorcycle accident, "I've lived flat-out. As a motorcycle racer, chemist, writer ... I was never cautious." This goes for John Gardner the critic as well, and that is nowhere more evident than in the pieces collected in this book. On Writers and Writing brings together, for the first time, John Gardner's essays and reviews on his fellow writers and reaffirms his status as one of the most intelligent, generous, and insightful critics of his generation. In piece after piece we see Gardner, the consummate teacher and critic, separating novelistic wheat from chaff, genuine fiction from fakery, examining the work of writers he admires - Saul Bellow, Vladimir Nabokov, Philip Roth, John Cheever, Larry Woiwode, and Joyce Carol Oates - as he would an assignment by one of his students. "Often," Charles Johnson says in his introduction, "the effect is shocking - he said that about John Updike? - but it is a testament to Gardner's professionalism that publicity and public acclaim never blinded him to the basic question every reviewer and critic must ask: What exactly do we have here?" That deceptively simple question is asked insistently throughout many of the pieces collected here, so that the reader too sees the craft and skill of some of America's greatest writers at work. In other essays, Gardner turns his extraordinary intelligence to subjects ranging from fairy tales and religion to King Arthur and Walt Disney. Chock full of insights and opinions, making it essential reading for anyone interested in American literature, On Writers and Writing is also an invaluable contribution to our understanding of John Gardner.… (more)

On Becoming a Novelist by John Gardner
Becoming a writer by Dorothea Brande
Writing fiction : a guide to narrative craft by Janet Burroway
The Practice of Writing by David Lodge
Why I Write: Thoughts on the Craft of Fiction by Will Blythe
4 more
Wild Mind: Living the Writer's Life by Natalie Goldberg
Writers on Writing, Volume II : More collected essays from The New York Times by Jane Smiley
The Writer's Chapbook by George Plimpton
Advice to Writers: A Compendium of Quotes, Anecdotes, and Writerly Wisdom from a Dazzling Array of Literary Lights by Jon Winokur
Fewer