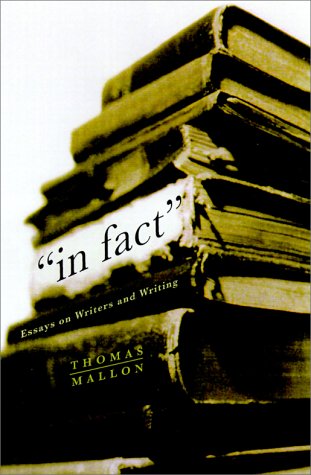 In Fact: Essays on Writers and Writing

From the acclaimed novelist (Henry and Clara, Two Moons), essayist (A Book of One's Own), and critic (1998 National Book Critics Circle Citation for Excellence in Reviewing)--an engaging new collection of essays. In Fact gathers the best of Thomas Mallon's superb criticism from the past twenty-two years--essays that appeared in his GQ column, "Doubting Thomas," and in The New York Times Book Review, The American Scholar, The New Yorker, and Harper's, among other publications. Here are his evaluations of the work of contemporary writers such asNicholson Baker, Peter Carey, Tom Wolfe, Do DeLillo, Joan Didion, and Robert Stone, and reassessments of such earlier twentieth- century figures as John O'Hara, Sinclair Lewis, Truman Capote, and Mary McCarthy. Mallon also considers an array of odd literary genres and phenomena--including book indexes, obituaries, plagiarism, cancelled  checks, fan mail, and author tours. And he turns his sharp eye on historical fiction (his own genre) as well as on the history, practice, and future of memoir. Smart, unorthodox, and impassioned, this collection is an integral piece of an important literary career and an altogether marvelous read.… (more)

LibraryThing member figre
Why, exactly, do people read essays? It is to get new perspectives on old ideas, new ideas on old perspectives, and to just learn new stuff. In general, the exploration of essays is the exploration of ideas. (Far too simplistic, but let’s move on.) So, why do people read essays about writers and writing? Well, in that case it is probably something a little different. If you’re a writer (which I pretend to be), it is to learn insights on how other people approach the craft. Techniques and tips aren’t the good parts (“how to’s” are not really that interesting.) It really comes down to mind sets and atmosphere. And, it is also about camaraderie – to understand that people are facing the same issues and, just maybe, approaching this craft in similarly bizarre ways. Finally, why do people read book reviews? Well, all of the previous points apply. But book reviews are much more about opinion than the average essay (or maybe they are more transparent about that opinion.) Really, why do I care what one person (someone who probably doesn’t have the same life approach I do) thinks about a book? That’s why book reviews have to be more than the three or four paragraphs you might find in this venue. They have to present a reason to be compelling, and reason to make you listen to the author.

In this collection, Thomas Mallon does an excellent job of making me care about what he has to say and, maybe more importantly, makes me want to explore the tomes that he praises (and makes me want to avoid the ones he doesn’t). The book is subtitled “Essays on Writers and Writing”, but the focus is much more on books than on writers or writing. Yes, there are essays that delve into writers and writing, but the collection contains many more actual reviews. However, that is the power in the approach that Mallon uses – even in a book review you learn about the writer, the writing, or both. He has made me want to explore books I had either not heard of or had dismissed. Shortly after reading the review of Palimpsest – Gore Vidal’s “autobiography” – I stumbled across it in the used book store and instantly picked it up. Immediately after reading his essay on Siegfried Sassoon I went to the web to find his poems. I’ve started a list of authors whose books I now want to add.

The collection has many good entries and, just as with any collection, some that don’t work. I will say that, as I read through the books, I began longing for some familiarity. (There was a brief respite when he discussed George Plimpton’s book on Truman Capote. While I haven’t read it, at least I knew a little bit about the subject.) In addition, things fall apart occasionally in the sections that are biographical or try to go other directions. (In particular, an essay about going through his father’s cancelled checks to reconstruct that father’s life didn’t work. It was obviously an important exploration for the author, but the note that was being rung went on too long.) But, these excursions into other areas also have some illuminating moments. Some of the essays owe their existence to research Mallon did for his own books, and those illuminations (in particular, some of the information on the Lincoln assassination) are very interesting and entertaining. The few bumps are worth the overall ride. You will see essays that expand your knowledge, give you new perspectives on old thoughts, and make you want to go out and read some more.… (more)
1 more
LibraryThing member keywestnan
Excellent collection of literary reviews and essays, especially strong on historical fiction (which Mallon writes). This is the perfect book if you were an English major but don't like academic literary criticism -- it's written for people who love to read.
Fewer

Thirteen ways of looking at the novel by Jane Smiley
The Writer's Chapbook by George Plimpton
Reading for My Life : Writings, 1958-2008 by John Leonard
For the Love of Books by Ronald B. Shwartz
The Merry Heart: Reflections On Reading, Writing, and the World of Books by Robertson Davies
3 more
The practice of reading by Denis Donoghue
A certain world; a commonplace book by W. H. Auden
Booknotes : America's finest authors on reading, writing, and the power of ideas by Brian Lamb
Fewer