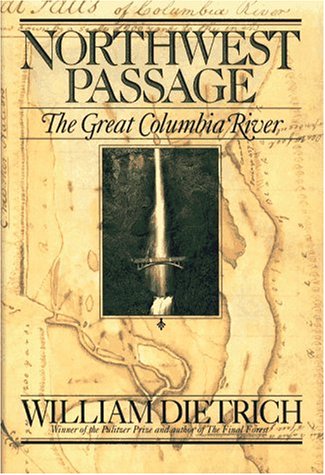 "When Lewis and Clark reached the Columbia River in 1805, they found a roaring and unruly river with a treacherous mouth and confusing course, boasting salmon runs without equal in the world. William Dietrich, Pulitzer Prize-winning reporter and author of The Final Forest, reveals the heroic stories, triumphant engineering, and disturbing taming of this powerful, beautiful river. Northwest Passage is a masterwork of history, geography, and science, a sweeping overview of the transformation of the Columbia from its geologic origins and aboriginal inhabitants to its pioneers, settlers, dam builders, farmers, and contemporary native Americans." "The Columbia is the second largest river, by volume, in the U.S. and the largest on the west coast of the Western Hemisphere. Its terrain varies from rain forests with more than 100 inches of precipitation a year to desert with as little as 5 inches per year. It was once the most inexhaustible of rivers with as many as 16 million fish pushing up its 1,200-mile length each year to spawn and die in its hundreds of tributaries, a run supporting one of the most populous and complex native cultures on the continent. Before the European discovery of the Columbia River, dreaming merchants and intrepid explorers risked their lives and their money to find the entrance to and navigate the wildly unpredictable course of this "Great River of the West."" "Native Americans clung to the Columbia as the root of their culture, colonizers came in search of productive land and an efficient trade route, and industrialists seeking energy transformed the region's wild beauty." "The Columbia of today is a product of its yesterdays. It is docile, run by engineers and turned on and off by valves with fourteen major dams on the river and more than 500 in its basin. The obstacle course of falls, boulders, whirlpools, and floods has been harnessed and provides 70 percent of the Northwest's energy. Yet these dams, plus pollution, irrigation, and growth, have caused half of the region's streams to be blocked and 98 percent of the wild salmon to disappear. In 1991, just four Snake River sockeye salmon survived the 970-mile gauntlet of nets and dams to reach spawning beds in Idaho's Sawtooth Mountains, 6,500 feet high. Environmentalists have named the Columbia one of the nation's most imperiled rivers." "Northwest Passage is not only about the natural and human history of the river but also about how people changed the Columbia and were in turn changed by it. What happens to the Columbia, after all, is what happens to us."--BOOK JACKET.Title Summary field provided by Blackwell North America, Inc. All Rights Reserved… (more)