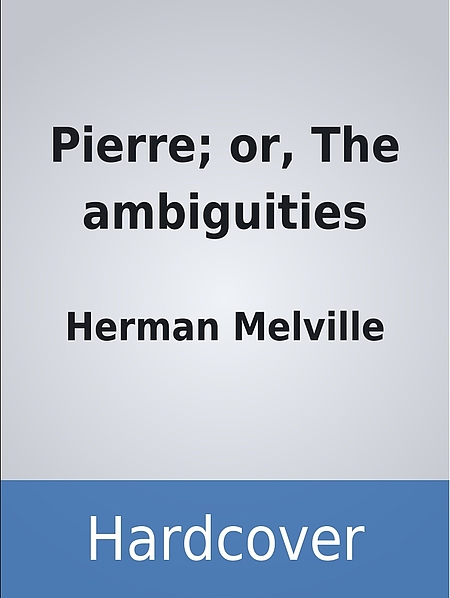 Pierre; or, The ambiguities

'Ambiguities indeed! One long brain-muddling, soul-bewildering ambiguity (to borrow Mr. Melville's style), like Melchisedeck, without beginning or end-a labyrinth without a clue - an Irish bog without so much as a Jack o'the'lantern to guide the wanderer's footsteps - the dream of a distempered stomach, disordered by a hasty supper on half-cooked pork chops." So judged the New York Herald when Pierre was first published in 1852, with most contemporary reviewers joining in the general condemnation: 'a dead failure,' 'this crazy rigmarole,' and "a literary mare's nest." Latter-day critics have recognized in the story of Melville's idealistic young hero a corrosive satire of the

LibraryThing member MeditationesMartini
How do you parody lurid melodrama? By going even more over the top, and seemingly nobody told Melville that sarcasm and hyperbole are a volatile and sometimes toxic mix. Taken in isolation, some of the tortuous metaphorizing--love's mouth is chambered like a bugle, and entails covering one another in peach juice, and also sinking mine shafts into your lover's eyes, and that's all on the same page--is inspired, but altogether it's cloying and ludicrous, and that would be fine if this was pure parody like The Rape of the Lock or something, but Melville has a serious, sad story to tell under here.


It's about a young, ever-so-slightly-bladish American aristocrat named Pierre Glendinning, whose life is but a dream, rapidly turning nightmarish after he meets his illegitimate sister (dark-complexioned) and leaves his WASPy fiancee (fair, naturally) and goes away to live with the sister and a disgraced village girl in an existence too squalid to ever become bohemian, with much talk about familial duty in the face of cruel and hypocritical social mores, an imperfectly sublimated sexual undercurrent (which Melville has great fun with, talking about how different this all would have been if the sister hadn't been hot), and, eventually, the arrival of the fiancee too. And of course it all ends in tears, and Melville's polemic against the emptiness of conventional religious belief and harmfulness of contemporary religious values is undermined by the telescoped timeframe on which everybody works themselves up to fever pitch (lots of dropping dead of sheer despair in this). And there's the usual metaphysical dithering, made worse somehow when taken out of the open air of the Pequod and sealed up in a boarding-house. By the end, though,Melville has loosened up a lot and some of his sardonic quips are genuinely funny in an off-the-cuff way, refreshing after the foregoing ponderosity: the thing about "two ceaseless steeds for a man to ride" (you laugh mockingly, merrily, but without the condescension that comes through in so many of Melville's prior japes at Pierre's expense); the leering sailor (a rare example of Melville's nautical Tourette's coming off successfully in non-nautical context).


A partial success, wheat amongst chaff.… (more)
3 more
LibraryThing member markbstephenson
For my money this is every bit as good as Moby Dick, especially once the protagonists arrive in New York City. There's action, some very clever humour, HM's trademark oracular and rhapsodic outbursts, and a touching tragic ending. It is true that Melville's female characters aren't as thoroughly portrayed as , say, Samuel Richardson's or Henry James' but I still cared about Mary Glendinning, Lucy Tartan, and Isabel the mystical guitarist and femme fatale. And with so much candid sharing of HM's own creative aims and processes! This reminded me of Gissing's New Grub Street - minus the politics of publishing and enmities of editors.… (more)
LibraryThing member GaryPatella
Melville decided to write a parody on the literature of his day. Unfortunately, it doesn't quite work.

Pierre, the protagonist, makes very ludicrous decisions and arrives at extremely ridiculous conclusions. This makes any type of empathy for Pierre nearly impossible. I know that Melville may have been poking fun at the ridiculous scenarios of other melodramas, but goes WAY too far.

Enough of the negatives, now I shall mention some positive aspects.

Melville does give some very insightful thoughts at various points. Some of the streams of consciousness become very philosophical. Those parts I rather enjoyed.

When the characters are simply described by their actions without directly speaking to one another (i.e. when there is no dialogue), it is possible to get a bit absorbed into the story.

The ending is quite unpredictable. Although Melville does end it in a bit of a deus ex machina fashion, it does come as a bit of a shock. Furthermore, after reading the final sentence, I did have to take pause for a bit to reflect on everything. This is something that does not happen when I read a book that is completely superficial. So the book must've contained some depth.… (more)
LibraryThing member libraryhermit
Prose style like no other author (that I have heard of yet Of course, there are a host of nineteenth-century American authors whom I have not read yet, so I am certain that there would be some of them that would be remeniscent of Melville, or vice versa. At first I want to say that the sentences are cumbersome, but that would be false, as there are no superfluous words. It is very disciplined prose and nothing is wasted.
The story is a bit strange, but what is there under the sun that we think we have never heard of yet, that can exist somewhere, somehow, in someone's imigination, or in reality, or both. (Both are really the same thing after all, reality and imagination, that is.)… (more)
Fewer

Typee, a peep at Polynesian life by Herman Melville
The confidence-man : his masquerade by Herman Melville
Axel's castle : a study in the imaginative literature of 1870-1930 by Edmund Wilson
The marble faun by Nathaniel Hawthorne
The cantos of Ezra Pound by Ezra Pound
3 more
The Recognitions by William Gaddis
Finnegans wake by James Joyce
In the shadow of young girls in flower by Marcel Proust
Fewer