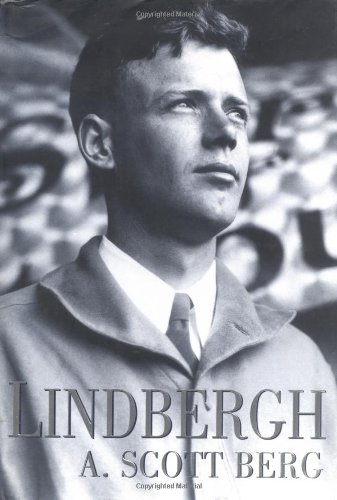 by A. Scott Berg

"National Book Award winner A. Scott Berg is the first and only writer to have been given unrestricted access to the massive Lindbergh archives - more than two thousand boxes of personal papers, including reams of unpublished letters and diaries - and to be allowed freely to interview Lindbergh's friends, colleagues, and family members, including his children and his widow, Anne Morrow Lindbergh. The result is a biography that clarifies a life long blurred by myth and half-truth." "From the moment he landed in Paris on May 21, 1927, Lindbergh found himself thrust upon an odyssey for which he was ill prepared - the first modern media superstar, deified and demonized many times over in a single lifetime. Berg casts dramatic new light on the lonely, sometimes twisted childhood that formed his character; the astonishing flight and thrilling, then overwhelming aftermath; the controversies surrounding the trial of his son's accused kidnapper; the storm over Lindbergh's fascination with Hitler's Germany and over his active role in the isolationist America First movement; and his remarkable unsung work devoted to medical research, rocketry, anthropology, and conservation. At the heart of it all is his fascinating, complex marriage with Anne Morrow Lindbergh, a relationship far from the storybook romance the public imagined, one filled with sudden joy and bitter darkness, and which forged her into one of the century's leading feminist voices." "Berg exposes the many facets of the private Lindbergh, including his ingenious medical work with Dr. Alexis Carrel, developing the precursor to an artificial heart; his pioneering support of rocket scientist Robert H. Goddard; his soul-searching visit to Camp Dora at Bergen-Belsen; his life with the primitive Masai tribe in Africa, and his discovery of the Tasaday in the Philippines; his fight to save the whales off the coasts of Japan and Peru; and his deeply moving final days in Maui, where he supervised the digging of his own grave."--BOOK JACKET.… (more)

LibraryThing member seoulful
A scrupulously researched biography of Charles Lindbergh by A. Scott Berg who was granted unlimited access by Charles' widow, Anne Morrow Lindbergh, to some 2,000 boxes of papers. He was also able to spend many hours interviewing the friends and family of the Lindberghs. And yet, some 30 years after his death, the final story of this remarkable man is yet to be told. Recently discovered letters in the attic of a German woman, has led to the revelation of at least two more families in Germany and Switzerland that Lindbergh kept hidden. As Mr. Berg's biography describes the years of his many absences due to travel in the 50s and 60s, psychiatrists were formulating theories of his "running away from old age" and "intimacy." His wife conjectured that he kept on the move to avoid discussing feelings, but no one at any time suspected the double life he was leading in Europe. From this book and the diaries and books of Anne Morrow Lindbergh, it is still not entirely possible to understand this man of genius who moved from one venue to another throughout his life applying a passion, energy and intelligence to each new project. He was a man of little formal education, yet one who very quickly after his famous flight at the age of 25 was able to move and converse with the leading figures and intellectuals of the day. No matter what the setting, he was the center of attention. Even with her back turned, his wife was able to discern his entrance by the reaction in the room. Given the monumental task of going through so much material, Mr. Berg has done an outstanding job of choosing that which best reveals the formulating influences on Lindbergh's life from early childhood until his death. It will be interesting to read the next chapter in his life, perhaps written by his European children.… (more)
8 more
LibraryThing member 5hrdrive
Some people seem able to cram two or three lifetimes worth of accomplishments into one lifespan. Charles Lindbergh managed four or five. Aviation pioneer, medical researcher, author, lecturer, philanthropist, military hero, humanitarian, naturalist... you name a cause in the 20th century and he seemed to be at the forefront of it.… (more)
LibraryThing member picardyrose
Lindbergh was a bully who abused his wife cruelly. I hate him.
LibraryThing member rw_flyer
A highly readable, balanced look at the Lone Eagle's life and accomplishments. I think it did a particularly good job of describing the man, both his strengths and not-so-pleasant aspects of his personality. The complexity of Lindbergh came through well, including his dislike of publicity and the complex relationships with his wife and family.

I highly recommend reading the Spirit of St. Louis alongside this book to get a feeling for the initial achievement that brought Lindberg fame, and to read Lindbergh's own account in comparison to the external view.… (more)
LibraryThing member carterchristian1
A book I could not put down. What most interested me about Lindberg was his interest in always moving on, from flying to pure science, to rockets. Read his wartime diaries and judge for yourself if he was unpatriotic. The American Ambassador to England sent him to Nazi Germany before war was declared so he could report formally as an expert on Nazi air power. He obviously took a long time to really realize the threat Hitler posed, and then fought without official position in the US Air Force in the far east.

It is amazing how I kept coming across Lindberg references in a fall trip across the country. There was the site in Arkansas (or was it Mississippi) where he had his first inadvertant night landing at a country club, or lodge. For a night's lodging the gave the proprieter a flight.

I enjoyed this biography for its objectivity and unembellished presentation of the facts of Lindbergh's life, which Berg accomplishes without being "plain-spoken." There are lyrical touches here and there--for example, the image of a pale blue Scandinavian sky tying together the beginning and end of Lindbergh's story. Berg manages to portray Lindbergh and the main players in his story as utterly human, fallible yet sympathetic, occasionally victims of outside forces like the press and public celebrity-hounding, but ultimately responsible for the courses of their own destinies.… (more)
Fewer

Truman by David G. McCullough
Lindbergh alone by Brendan Gill
Hour of gold, hour of lead; diaries and letters of Anne Morrow Lindbergh, 1929-1932 by Anne Morrow Lindbergh
Lindbergh : a biography by Leonard Mosley
Titan : the life of John D. Rockefeller Sr. by Ron Chernow
16 more
The wartime journals of Charles A. Lindbergh by Charles A. Lindbergh
The Rise of Theodore Roosevelt by Edmund Morris
The bully pulpit : Theodore Roosevelt, William Howard Taft, and the golden age of journalism by Doris Kearns Goodwin
Means of ascent by Robert A. Caro
The years of Lyndon Johnson. [Volume 3], Master of the senate by Robert A. Caro
Goldwyn : a biography by A. Scott Berg
Yeager, an autobiography by Chuck Yeager
Lincoln by David Herbert Donald
Theodore Rex by Edmund Morris
Anne Morrow Lindbergh : her life by Susan Hertog
The sound of wings : the life of Amelia Earhart by Mary S. Lovell
North to the Orient by Anne Morrow Lindbergh
The Wright brothers by David G. McCullough
Undaunted courage : Meriwether Lewis, Thomas Jefferson, and the opening of the American West by Stephen E. Ambrose
The Chief: The Life of William Randolph Hearst by David Nasaw
Autobiography of values by Charles A. Lindbergh
Fewer