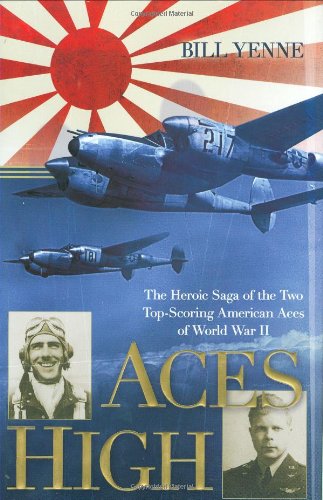 Capturing the hearts of a beleaguered nation, the fighter pilots of World War II engaged in a kind of battle that became the stuff of legend--and those who survived showdowns earned the right to be called aces. But two men in particular rose to become something more. They became icons of aerial combat, in a heroic rivalry that inspired a weary nation to fight on. Richard "Dick" Bong was the bashful, pink-faced farm boy from the Midwest. Thomas "Tommy" McGuire was the wise-cracking, fast-talking kid from New Jersey. What they shared was an unparalleled gallantry under fire which earned them each the Medal of Honor. What separated them was a closely watched rivalry to see who would emerge as the top-scoring American ace of the war. What they left behind is a legacy and a record of aerial victories that has yet to be surpassed anywhere in the world.--From publisher description.… (more)

I've heard Major Bong mentioned multiple times in my WWII aviation reading. But this is the first book recounting his exploits I've read. It follows the air war in the south pacific pretty well and uses Japanese ace Saburo Sakai's information as a supplement to talk about some of the encounters.

This book is a dual biography of Bong and Maj Thomas McGuire. Towards the end of the war they were both racking up air kills and the media ran with the story. Bong ended with an official count of 40 and McGuire was at 38. Both pilots were awarded the medal of honor for their skill and daring.

The book starts out talking about the boyhoods of each of the books and discusses their goals for learning how to fly one day. Then it talks about their training. Each of them had minor mishaps during training but survived. Interesting to think about their generation in war conditions were given some room to fail, learn, and recover.

There is discussion about the different airframes that the boys trained on and the aircraft in the war zone. Both Bong and McGuire were P-38 pilots and the capabilities of their airframe versus others available are discussed briefly.

Overall the book was well written. This could make a good movie.… (more)