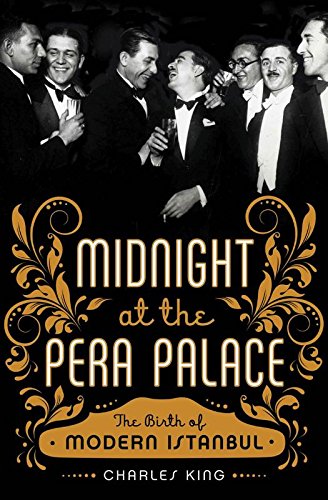 Midnight at the Pera Palace : the birth of modern Istanbul

"When the Ottoman Empire collapsed, so many spies mingled in the lobby of Istanbul's Pera Palace Hotel that the manager posted a sign asking them to relinquish seats to paying guests. As the multi-ethnic empire became a Turkish republic, Russian émigrés sold family heirlooms, an African American impresario founded a jazz club, Miss Turkey became the first Muslim beauty queen, and a Boston professor unveiled the lost treasures of the Hagia Sophia. Turkey's president Kemal Atatürk, Muslim feminist Halide Edip, the exiled Leon Trotsky, and the future Pope John XXIII fought for new visions of human freedom. During World War II, German intellectuals ran from the Nazis while Jewish activists spirited refugees out of occupied Europe. In this pioneering portrait of urban reinvention, Charles King re-creates an era when an ancient city became a global crossroads--a forgotten moment when Europe's closest Muslim metropolis became its vital port of refuge; 'Intrigue, violence, sex, and espionage, all set against the slow dimming of Ottoman magnificence. I loved this book'--Simon Winchester"--Provided by publisher.… (more)

LibraryThing member pierthinker
A mainly social history of the development of modern Istanbul in Turkey through the 20th century. The book uses the construction and life of the Pera Palace Hotel as a loose focus for the great changes occurring in Istanbul from the end of the Ottoman Empire through the creation of the Republic and, most importantly, the development of turkishness itself. King knows his stuff and is clearly in love with Istanbul and its people, the Istanbullus. The strength of this history is how he brings forward characters almost certainly unknown to anyone outside of Turkey and shows how they impacted the social development of the city.

A surprise to me is how strong King is on the Turkish and Istanbullus persecution of minorities. A key theme through the book is the destruction of multi-cultural life in favour of a wholly fabricated ideal of Turkey and being Turkish - both really unknown before the break-up of the Ottoman Empire and the establishment of the Republic after the First World War. A lot of space is devoted to the shabby treatment of Jews before and during the Second World War. It is interesting to see how the enforcement of a secular society in Turkey was also used to force a purely Islamic religiosity on the people, with many laws and regulations aimed at driving non-Islamic and non-Turkish (that is, Armenian, Greek, Jewish and Christian) populations, many of whom had lived and worshipped in Istanbul for generations, out of society and ultimately out of the country. There is no doubt from this book that Istanbul has become less diverse and less culturally rich as a result.

My only criticisms are that the many photographs are reproduced poorly and that there are insufficient maps to help readers less familiar with Istanbul than they might be with other major cities.… (more)
4 more
LibraryThing member bdtrump
I received an Advance Reading Copy via GoodReads First Reads program.

King's work is richly detailed in the time period between the end of the 19th Century and the middle of the 20th, with focus not just on Istanbul but on the Ottoman Empire/Turkey in general as well. The stories told are incredibly detailed and are presented in an attractive and easy to read manner.

Overall, King offers what may be the last word on the rise of modern Istanbul. He's gifted as a historian in his ability to blend an attention to detail with an interesting storyline, making even the most ignorant of readers able to follow along with the extreme changes facing Istanbul before and after World War I. A must read for anyone interested in WW1, the Ottoman Empire, or Turkish history in general.… (more)
LibraryThing member Shrike58
Dealing with the themes of transition, transience and transformation in the demise of the Ottoman Empire and the rise of the Turkish Republic, King hangs much of his tale on the rise and fall of the hotel the Pera Palace, which originated as a destination created by the firm who ran the fabled Orient Express.

Was I entertained by this book; yes. Is it faultless; no. In an essentially picaresque tale the book does have a somewhat meandering quality at time. Still, if you're looking for an introduction into the rise of Modern Turkey you could do a lot worse then picking this book to start your education.… (more)
LibraryThing member palu
I liked the way the writer included historical facts among everyday life. I also liked his intention to put the Hotel as a way to show theses changes. In fact, the Hotel role was missed through the book with much more emphasis in the political situation and the Jews fate during the WW II.About this subject it was very interesting how it was described the Jewish migration to Palestine but a subject like that deserved a more extended description better fitted in a different book. Too short and quick the texts about Turkey politics transition to modern time.… (more)
LibraryThing member drmaf
Enjoyable romp through the history of Constantinople/Istanbul in the 20th century. Grand events of Turkish & world history are interspersed with personal stories of entrepreneurs, singers, beauty queens, spies, archaeologists and the ups and downs of the singular Pera Palace, one of the great surviving institutions of pre-Kemal Istanbul. King moves deftly between macro and micro-history, it is a great way to learn the basics of how the age-old Ottoman Empire morphed into the modern nation-state of Turkey.… (more)
Fewer

Istanbul : the imperial city by John Freely
Istanbul : memories and the city by Orhan Pamuk
Defeat at Gallipoli by Nigel Steel
Sleepwalkers : how Europe went to war in 1914 by Christopher M. Clark