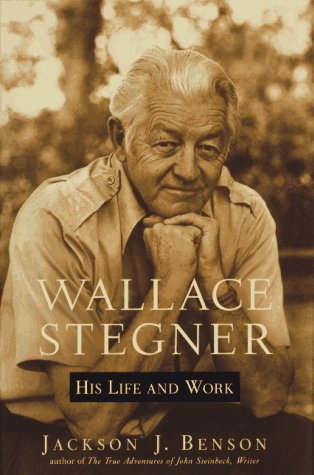 Wallace Stegner : his life and work

"Drawing on nearly ten years of research and unlimited access to Stegner's letters and personal files, Benson traces the trajectory of Wallace Stegner's life from his birth on his grandfather's Iowa farm, his frontier childhood on the lonely prairie homestead in Saskatchewan, and his teenage years among Salt Lake City's Mormons up through his prominence as an award-winning writer, critic, historian, environmental activist, and teacher. Stegner founded Stanford University's legendary Creative Writing Program, where his students included such budding writers as Larry McMurtry, Ken Kesey, Wendell Berry, Robert Stone, Raymond Carver, Evan Connell, and Tillie Olsen." "But Benson's book is as much a consideration of Stegner's own literary legacy as it is a blow-by-blow retelling of his life. Providing a critical reassessment of the entire body of Stegner's work, Benson argues convincingly for his subject's place in the literary canon - and not merely as a "regional" Western writer, but quite simply as one of the great writers of twentieth-century American letters, whose books can stand comfortably on the shelf beside the work of Hemingway, Faulkner, and Steinbeck."--BOOK JACKET.Title Summary field provided by Blackwell North America, Inc. All Rights Reserved… (more)

LibraryThing member LibraryCin
Wallace Stegner was an American author, known for writing about the West. As the title suggests, this book looks at his life, and delves into some criticism of his works, as well.

Generally, I like biographies. For me, I would have liked more “life” and less “works” in this book. I enjoyed the first part of the book, when it focused on his childhood in Southern Saskatchewan (close to where I grew up), and his teenage years in Salt Lake City, and some of his time as a university student. From there, he went on to write, as well as teach at Harvard and Stanford. This is where the book was often “interrupted” with criticism of his various works. Maybe this would have been more interesting for me, if I'd read some of them (I've only read his childhood autobiography, Wolf Willow). Admittedly, a lot of his fiction was based on people in his life, so it did sort of parallel, but there was more criticism than I was interested in and that's where I would often (though not always) lose focus on the book. Overall, I thought it was o.k.… (more)