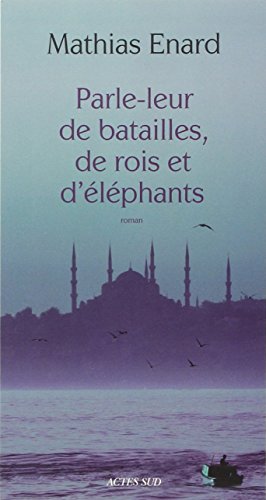 "In 1506, Michelangelo -- young but already renowned sculptor -- is invited by the Sultan of Constantinople to design a bridge over the Golden Horn. The sultan has offered, alongside an enormous payment, the promise of immortality, since Leonardo da Vinci's design had been rejected: "You will surpass him in glory if you accept, for you will succeed where he has failed, and you will give the world a monument without equal." Michelangelo, after some hesitation, flees Rome and an irritated Pope Julius II -- whose commission he leaves unfinished -- and arrives in Constantinople for this truly epic project. Once there, he explores the beauty and wonder of the Ottoman Empire, sketching and describing his impressions along the way, and becomes immersed in cloak-and-dagger palace intrigues as he struggles to create what could be his greatest architectural masterwork. Tell Them of Battles, Kings, and Elephants -- constructed from real historical fragments -- is a story about why stories are told, why bridges are built, and how seemingly unmatched pieces, seen from the opposite sides of civilization, can mirror one another" --… (more)

I picked up this amazing little book because it came highly recommended in a "best of" directory consisting mainly of French writings (La bibliothèque idéale RTL edited by Bernard Lehut); it has not been translated into English yet, but it can only be a matter of time given it won a prestigious French literary award, its vastly famous protagonist—the artist Michelangelo di Lodovico Buonarroti Simoni, aka Michelangelo—and the compelling premise that the great Italian Renaissance master had made a trip to what was then known as Constantinople in 1506 after being invited by Sultan Bayezid II.

From a few verifiable facts, Mathias Enard has weaved a highly poetic tale on the premise that following the Sultan's invitation, (which Michelangelo's famous biographer Giorgio Vasari noted in his Lives of the Most Excellent Painters, Sculptors, and Architects), the great master did in fact accept the invitation and spent three months in Constantinople to present plans for a bridge connecting the Eastern and Western parts of the great capital. Sultan Bayezid II has been mostly forgotten by history, but it seems he was a great visionary who promoted learning, fine arts, poetry and earned the epithet of "the Just" because of the smooth running of his domestic policies. Among other things, he organized the evacuation of Jewish and Muslim Spanish civilians who were evicted from Spain as part of the Inquisition, and granted them full Ottoman citizenship. Bayezid II was keen to have a bridge designed by one of the great Italian Renaissance masters, and asked Leonardo da Vinci to submit his designs first. This drawing is still in existence today, but it seems the proposed bridge was deemed impossible to build with the technology available at the time and it was rejected by the Sultan's engineers, after which Bayezid II turned to Michelangelo.

The story he weaves here begins with Michelangelo's arrival to Constantinople in May 1506, where is he given shelter by an Italian merchant and greeted by one of the Sultan's protégés, the Ottoman poet Mesihi of Pristina. The two men couldn't be more different; Mesihi, though now still considered as an important contributor to Ottoman letters, having died young in an impoverished state and total obscurity, while Michelangelo went on to become rich and famous and died towards the end of his ninth decade. Mesihi enjoyed much food and drink, and openly courted both men and women, while Michelangelo was of an ascetic nature, refusing all drink and eating little. But here Enard imagines the two men developing an unlikely friendship and the poet introducing the renaissance artist to a performer of great beauty and indefinable sex during one of their outings. The language is sublime, and we are privy to some of Michelangelo's actual correspondence with one of his brothers, which Enard has translated into French for his book.

As for the intriguing title of the short novel, the author took the sentence from Rudyard Kipling’s preface of Life’s Handicap, a short story collection. This preface contains a fictive conversation between Kipling and “Gobind the one-eyed”, a holy beggar, who explains the art of telling stories: “Tell them first of those things that thou hast seen and they have seen together. Thus their knowledge will piece out thy imperfections. Tell them of what thou alone hast seen, then what thou hast heard, and since they be children tell them of battles and kings, horses, devils, elephants, and angels, but omit not to tell them of love and suchlike. All the earth is full of tales to him who listens and does not drive away the poor from his door. The poor are the best of tale-tellers; for they must lay their ear to the ground every night”.

Such a beautifully told tale that it's well worth reading twice in a row.

*Proposed translation for the English title… (more)
5 more
LibraryThing member davidroche
The very nice founder of The Republic of Consciousness Prize, @neilgriffiths, recently tweeted that Mathias Enard was ‘the most important writer of fiction in the world’ so I thought I had better take a look. I decided to ease myself in via his novella Tell Them of Battles, Kings and Elephants (Fitzcarraldo), which is translated from. The original French by Charlotte Mandell. Enard studied Arabic and Persian, and here he pieces together archive material; Michelangelo is drawn to Constantinople, despite papal disapproval, to succeed where Leonardo da Vinci failed, and design a bridge to cross the Bosporus. I really enjoyed this sojourn and now will upgrade to Enard’s Zone, which Griffiths describes as ‘the most serious work of fiction of *all time*’. Gulp.… (more)
LibraryThing member MM_Jones
Newly translated to English, this story is based on historical possibilities of Michelangelo designing a bridge in Constantinople in 1506. It is written with the assumption that you are familiar with the general concept of Michelangelo and focuses on a brief period of time. As he was an artist shaped by his work, there is some evidence of this location influencing his later architecture and paintings. That the past lives only in stories and the people who tell them is an interesting idea for a book and this is well worth the time.… (more)
LibraryThing member Steve38
A nice little piece of historical make believe. Michelangelo goes to Constantinople at the invitation of the Sultan to design a bridge to cross the Golden Horn. Bits of real history combined with bits of imagination.
LibraryThing member AnthonyTFS
What is it of Mathias Énard’s prose that is so beguiling? The latest to be translated into English by Charlotte Mandell, Tell Them of Battles, Kings and Elephants, is made up of straightforward declarative sentences, smoothly plotted and without the tortured density of novels like Zone or Compass.

I’d been reluctant to read this latest, despite being bewitched by each of the three previous novels published by Fitzcarraldo Editions, disliking historical fiction by instinct with its strained effort to recreate period. Énard’s story is more of a mood piece, avoiding the tedium of historical documentation. There is a quiet immensity to his story; though crammed with impressions, Énard imposes a form on his material that heavily filters his research through a mediating intelligence.

What I am left with is a dark vitality, a sequence of quiet passages that celebrate the reticent beauty of Istanbul (Constantinople), and an artist’s endeavours. Énard makes the period and city palpable because, as in the other novels, he writes so effectively about distance—those distances between lovers and would-be lovers, achievement and ambition, and that between pride and humility.… (more)
LibraryThing member thorold
This is the first of Enard's books that I've read. I bought it mostly on the strength of the intriguing title, which turns out to be a paraphrase of Kipling's advice on telling stories to the young.

Enard uses the historical novelist's traditional exemption from Occam's Razor to speculate about something that could have happened, but almost certainly didn't. What if Michelangelo had accepted an invitation from the Sultan to go to Istanbul in 1506 and design a bridge for him? As Enard admits in his note, the evidence is at best circumstantial, but it might explain one or two unexpected bits of (possibly) Byzantine and Ottoman influence in his later work. And anyway, it's amusing to think about the great renaissance man struggling to come to terms with a culture and a project that were both well outside his previous experience.

Enard makes two characters fall desperately in love with Michelangelo, only to be baffled by his aversion to sensuality, and surrounds the building project with a typically Ottoman court intrigue that the sculptor entirely fails to notice until he wakes up to find a murdered assassin in his bedroom.

An entertaining little book, with some interesting sidelights on cultural clash and what the glories of the renaissance might have looked like to outsiders. Possibly some of the more sensual passages steer a bit too close to having your orientalist cake and eating it, but it's a modest enough book for us to let him get away with it.… (more)
Fewer