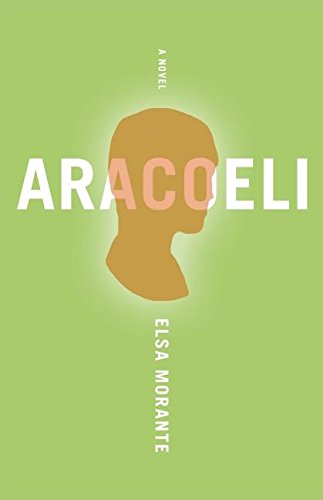 "The first time I read Aracoeli, I found it almost pointlessly disturbing and shocking. On rereading it, I still found it disturbing and shocking, but I have also grown to admire it--perhaps because it is so dark and resists any attempt to classify it. In writing this novel, Morante may have knowingly sacrificed clarity and logic in order to express her vision of a chaotic world." (Lily Tuck,Woman of Rome: A Life of Elsa Morante) Aracoeli--Elsa Morante's final novel--is the story of an aging man's attempt to recover the past and get his life on track in the process. The Aracoeli of the title is the narrator's deceased mother, who grew up in a small Spanish town before marrying an upper-class Italian navy ensign. The idyllic years she spends with her only son--Manuel, the narrator of the novel--are shattered when she contracts an incurable disease (probably syphilis) and becomes a nymphomaniac. Now, at the age of 43, Manuel, an unattractive, self-loathing, recovering drug addict who works a dead-end job at a small publishing house, decides to travel to her hometown in Spain in order to look for her. Filled with dreams and remembrances the novel creates a Sebaldian landscape of memory out of this painful journey, painting a portrait that is both touching and bleak. Appearing here for the first time in paperback--the hardcover was published in 1984--Aracoeli is an important, and long-neglected, work in Morante's oeuvre.… (more)

LibraryThing member Quixada
Absolutely beautiful writing. Reminded me of Sebald and Saramago (pre-"Blindness"). I am surprised that this author is not more well known. This book is kind of slow moving though. It is not an easy read.
10 more
LibraryThing member DieFledermaus
This book is wonderfully written, but it is also easy to see why some people would dislike it. A quick description of the story would make it sound predictable – from an unhappy present, the narrator thinks back on his childhood and his loving relationship with his long-dead mother Aracoeli, which eventually turned sour. However, the erudite, labyrinthine prose which describes both the arid, dead end life of Emanuele in 1970’s Milan and his pre-WWII childhood sets the book apart. It’s certainly very dense prose, which I think could make it hard going, but I really enjoyed Morante’s writing so everything went by quickly even the present sections, which could be a bit flat (deliberately so). The subject of Aracoeli is similar to the other Morantes that I’ve read – History: A Novel and Arturo’s Island - in that all are about the almost too-close love between a mother (or mother figure) and son(s). However, all have a very different feel even if one can see some similarities. Aracoeli, despite being a realistic story, has a fantastic or hallucinatory quality due to Emanuele’s constant fantasizing, dreaming or obsessing.

The first half of the book switches between Manuele’s empty present life, where he decides to go back to Aracoeli’s Spanish hometown, and the past, where he describes his parents’ anomalous relationship and marriage and their happy life together. The prose is wonderfully vivid and little details, like a servant’s snobbery, the differing character of their neighbors, or Aracoeli’s shopping habits, end up being memorable. Manuele’s father, a naval officer, and Aracoeli, an uneducated peasant girl, have a love at first sight relationship. After she has Manuele, his father moves them to a small house outside of the city until their marriage and removal to a class-appropriate flat. Manuele’s Aunt Monda, a helpful and busy spinster, provides support and teaches Aracoeli how to behave correctly. The narrator recollects their time in the little house as a lost paradise, when he had his mother all to himself. Even when they moved and he had to share her with his father, his life was still happy. He believes Aracoeli loves him less as he grows older and uglier, but their final estrangement starts with some family tragedies and Aracoeli’s increasingly bizarre behavior. The second half of the book stays in the past and depicts Aracoeli’s unhappy end.

Describing the plot can’t really give the feel of the book, with Manuele’s feverish obsessions and dreams, his frequently recurring inside references, occasional disquisitions on fate and unhappiness, and his detailed descriptions of every facet of the only happiness he’s ever known. The juxtaposition between the lengthy, twisting prose and Manuele’s childish self or the mundane events in the 1970’s works well. His present life is very depressing and he only has bad memories of life after Aracoeli. While the prose was still creative and high-flown in these sections, they weren’t as interesting to read. Besides the dead-end feel of the present sections, the other problem I had with the book was a possible interpretation of Manuele’s stunted romantic relationships. Unfortunately, his life seems to fit a negative stereotype of gay men – he turned to men because of a rejecting mother and badly behaving/gross women. Those bits were annoying, but overall this is a very well-written book. Recommended, with the above caveats.… (more)
LibraryThing member dchaikin
Immediately on starting this book I was struck by how exquisite the language is. It's really masterful, beautiful. But, it's a tough read. Our narrator is a broken hopeless middle aged man who has not emotionally recovered from the death of his parents in Rome during world war II, when he was not quite a teenager. He his haunted by memories of his cherished and unusual mother, Aracoeli. Now he has set out on a journey to try to find her; a journey in two senses. He literally travels to the rocky arid village of her childhood in Spain; and, also, along the way he revisits his childhood memories, telling us his story. It's not a hopeful journey, there is no light at the end. His view of himself as scarred and unlovable lays a fateful gloomy shadow over the entire book.

It's not clear to me what Elsa Morante set out to do here. I don't think it's an accident that this book spends long monotonous stretches detailing the narrators history with his mother. I'm guessing this was Morante's way of really imprinting this deep in the readers mind, giving the book some heft, a lot of heft. And that I think that works. It was effective, rewarding to an extent. This is a carefully and deeply crafted book.… (more)
LibraryThing member roniweb
I really wanted to like this book, but the story never grabbed me. It's a very detailed tale, so if you like well painted scenes and memories, this is the book for you. I didn't have the patience for it during the summer. Perhaps a winter book.
LibraryThing member SigmundFraud
i couldn't finish this book. I just couldn't get into. That doesn't mean someone else won't be enthralled.
LibraryThing member brittlesmile
Upon receiving this book, I was immediately struck by the cover's resemblance to The Brief, Wondrous Life of Oscar Wao. The comparison is apt not only because they are both stellar works, but also because they both convey a sense of fated hopelessness.

As other reviews have mentioned, the highlight of this book is the exquisite language. William Weaver definitely deserves some credit for his beautiful translation. Despite the fact that I was torn between pity and disgust for the protagonist throughout the novel, reading about him was, if not a pleasant experience, a moving and surprisingly beautiful one. I think that Elsa Morante touches on a basic element of humanity in Emmanuel, the need that all people have to be loved and accepted. Emmanuel's search for those things certainly hit close enough to home to make me feel uncomfortable at times.

Although the pace is sometimes sluggish, it is definitely a masterfully crafted book that will haunt you some time after you've finished it.… (more)
LibraryThing member gwalklin
Not quite all the way finished with this book, but I'm intrigued enough with it so far. "Careful" may be the best word to describe it at this point. The language can be a bit overly detailed and formal, but I do think it serves a purpose -- so the complaint may be more peccadillo than anything else. At any rate it formalizes the reading to a certain extent, which is never a bad thing as far as I'm concerned. Still, I'll admit I'm interested in getting my hands on some Morante, esp. "History."… (more)
LibraryThing member BALE
Complex dreamlike imagery fills this lovely novel, as does the author's beautiful use of language. Kudos, too, to the translator for capturing Morante's breathless narrative.
LibraryThing member hemlokgang
"This one, unlike the other, was not the herald of weeping, but certain individuals are more inclined to weep for love than death." This is the final sentence of this amazing novel. The reader is lured into a tale of the cataclysmic meeting of past and present, of a psychopathic love of son for mother, of the despair of lonliness, and of a single love beginning in the womb and coming to rest in the mythic El Almedral, where the mother's life began. Cryptic enough? Reading this novel is like participating in a lifelong fever dream which is inhabited with deep fears, monomaniacal love, and the depths of despair. The writing is magnificent and emotionally descriptive to a degree I have rarely seen. This is a translation that uses the highest level of vocabulary in English. I wish I read Italian!! The intensity of the protagonist can be a bit overwhelming, but what the heck. It is an Italian novel after all, isn't it? (I write that with the greatest affection!)… (more)
LibraryThing member roniweb
This novel is very detailed in its writing and description of people and places...thus it moved too slow for me. I hope that perhaps I'll find a time when I can take my time with the story. I had high hopes for the book, but my hectic life and need to read things quickly submarined those hopes.
LibraryThing member jhhymas
I really wanted to like this book written by someone with such an interesting life! I have tried several times to read it and cannot go on. My reaction to it has been a kind of depressed boredom. After I got the book, I bought a biography of Morante and found it very interesting. If I figure out what the problem is between me and this book, I will return and update this review.… (more)
Fewer

Arturo's island : a novel by Elsa Morante
Landscape in concrete by Jakov Lind