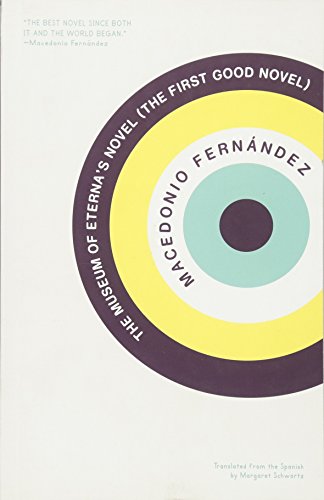 The museum of eterna's novel : the first good novel

"I imitated him, to the point of transcription, to the point of devoted and impassioned plagiarism. I felt: Macedonio is metaphysics, is literature. Whoever preceded him might shine in history, but they were all rough drafts of Macedonio, imperfect previous versions. To not imitate this canon would have represented incredible negligence."--Jorge Luis Borges The Museum of Eterna's Novel (The First Good Novel) is the very definition of a novel written ahead of its time. Macedonio (known to everyone by his unusual first name) worked on this novel in the 1930s and early '40s, during the heyday of Argentine literary culture, and around the same time thatAt Swim-Two-Birds was published, a novel that has quite a bit in common with Macedonio's masterpiece. In many ways,Museum is an "anti-novel." It opens with more than fifty prologues--including ones addressed "To My Authorial Persona," "To the Critics," and "To Readers Who Will Perish If They Don't Know What the Novel Is About"--that are by turns philosophical, outrageous, ponderous, and cryptic. These pieces cover a range of topics from how the upcoming novel will be received to how to thwart "skip-around readers" (by writing a book that defies linearity!). The second half of the book is the novel itself, a novel about a group of characters (some borrowed from other texts) who live on an estancia called "la novella" . . . A hilarious and often quite moving book,The Museum of Eterna's Novel redefined the limits of the genre, and has had a lasting impact on Latin American literature. Authors such as Jorge Luis Borges, Julio Cortázar, and Ricardo Piglia have all fallen under its charm and high-concepts, and, at long last, English-speaking readers can experience the book that helped build the reputation of Borges's mentor. Macedonio Fernández was one of the most influential--and strangest--Argentine authors ever. He was Borges's mentor; he campaigned for president by leaving notecards with the word "Macedonio" in cafes; he started a utopian society. He also wrote the "Last Bad Novel" (Adriana Buenos Aires) and the "First Good One" (The Museum of Eterna's Novel). Margaret Schwartz is an assistant professor at Fordham University. She was a Fulbright fellow to Argentina in 2004, during which time she researched the life and works of Macedonio Fernández. Adam Thirlwell is the author of the novelsPolitics andThe Escape. His book about literature and translation,The Delighted States, won the Somerset Maugham Award in 2008. He has twice been named as one ofGranta's "Best Young British Novelists."… (more)

LibraryThing member hemlokgang
This is the perfect book for the reader who loves abstract art, who trusts that meaning and beauty are in there somewhere if only one sticks with it....this is a novel about a ranch gnamed "the Novel".......this is a novel with 50+ prologues.....not a typo...50+ prologues. Thisis a novel for the reader who revels in metaphysics......the metaphysics of the written word. Did I like it? I don't know. Would I recommend it? I don't know. Was it a memorable intellectual experience? Absolutely!… (more)
2 more
LibraryThing member JimElkins
It is amazing to “discover” such an important novel: Fernández was a friend, mentor, inspiration, and precursor to Borges. This novel, the work of over 25 years, is one of the first and still one of the most complex anti-novels ever written. I am delighted to have discovered it only 60 years late. (It was written between 1925 and 1952.)

I have found that in reading and re-reading The Museum of Eterna’s Novel (The First Good Novel) (and re-reading is the only way to read: the novel itself theorizes its possible readings extensively, inventively, repetitively, exhaustively) I find my thoughts divide into two currents. First is the mechanics and proposals of the anti-novel; then there is the psychology, the mood, or the affect that emerges from so many layers of anti-realism. The first develops mostly in the first half of the book, which is comprised entirely of fifty prologues to the novel. The second emerges mainly in the second half, which is the novel, and is titled “Were Those Prologues? And Is This The Novel?.”

1. The mechanics of the anti-novel.
In terms of the ways it articulates its relation to reality and fiction, this book is more sophisticated than the many that have followed it. It ends many times (there is a chapter that declares “a minute more, or a minute less” remains of the novel), and it talks continuously about itself (there are prologues that meditate on the blank pages that publishers still print before and after the text). It describes all possible sorts of readers: the one who reads straight through; the one who helps write the book itself; and the “skiparound” reader, who is both essential and wrong. (p. 119) The very idea of narrative, of plot, is theorized as a matter of memory. If something “big and new” doesn’t happen, he says, after a character “dies” (in quotation marks because characters don’t die, but move from one novel to another), then we will always see her as she was, because “without new things happening there’s no forgetting, because there’s no Time—which is nothing—outside of events, which weaken our images of the past.” Such a thing would be “a formula for unforgetfulness.” (p. 117)

There are moments when all this is fairly programmatic, and Fernández seems to be writing a fragmentary manifesto of literary modernism (“the first good novel”). “For my pages,” he says, “I want constant fantasy” in order to “avoid the hallucination of reality, which is a blemish on the face of art.” (p. 36) One of his characters, the Traveler, “functions exclusively as the extinguisher of the hallucination that menaces the story with realism.” The only “frustration or abortion of a character” in a novel is that he appears to live. (p. 35) At his least interesting, Fernández is programmatic in his anti-realism. “There is a reader with whom I cannot reconcile myself,” he says in a prologue “about the doctrine of art”: “the reader who wants what all novelists have coveted, to their shame: Hallucination.” (p. 32) Most of the time, Fernández’s paradoxes of realism and anti-realism are inventive and labyrinthine enough to keep me amused, if not really engaged. But none of this is what kept me reading and re-reading The Museum of Eterna’s Novel.

2. The mood, the feeling of the novel.
What ends up mattering is the emerging sense of Fernández himself: the kinds of moods, of feeling, that impelled him. At first it seems this may be early twentieth-century idealism and aestheticism. At the end of the book, the President speaks of “Ugliness’s long reign” in Buenos Aires, and how he wanted to “abolish civil ugliness.” (p. 236) It’s true the book bears the stamp of its time, and even—as the translator says—uses archaic language in places. But there is more to it than that. Throughout the book characters speak of their distances from one another, and the story turns on people coming together in a frail and unrepeatable gathering, and going apart again in separate journeys. The President invites each of them “to choose a path that would take them farthest from the others, so as to assure, at least, that no one had to experience in another that other farewell, death.” (p. 231) I think it is central to Fernández’s imagination that the sight of death, and ultimately everything even faintly like it, has to be kept away. Here the President is a novelist, imagining a world in which characters can be moved around in such a way that they suffer and die alone, offstage, as far away in their own worlds as possible. There is an amazing short essay on suicide, about a character named Suicide: it begins in such an abstract way that Fernández apologizes and starts again. It must have been a difficult couple of pages for him to write, because it tries so hard to think away the experience. (p. 171)

And why does Fernández want to be a character? Partly because he feels that if he has not experienced love, or when he does not experience love, his only hope of happiness is to be fictional. (p. 229) A character is not just a way of juggling the real and the imaginary, or playing with novelistic conventions. It is a way of existing as a trace, in a trance. “She is… exquisite,” he writes, “no one can tell the difference between seeing her and thinking of her.” (p. 143) A character can “feel nothing,” but be read. A reader is “moved” by such a character. (p. 130) For the character, such an existence is “enviable”: it is like living at a distance from yourself and from life. (p. 141)

Ultimately the point of the anti-novelistic experiments is to live without pain. Fernández says “each person” in the estancia was “moved by this double impression: ‘I entered La Novela, and I entered the novel.’” (p. 136) That is not a definition of the modern novel: that is the mirroring that he hopes will save him. The Museum of Eterna’s Novel (The First Good Novel) is, in the end, not a piece of experimental fiction as much as a concerted dream of a life without pain: Fernández was neurasthenic and exquisitely afraid of suffering, and he slowly dreamed his this book as an Eden, a museum, and in a perverse and impossible way, also a novel.… (more)
LibraryThing member jonfaith
There's no more artistic moment than the fullness of reading in the present."

This feat boasts or threatens of sporting 50 prologues, a series of checkpoints, a Gaza of apprehensions, anterior doors leading to further intermediary spaces, an endless qualification and interrogation of the novelistic enterprise, a Sorrentino sortie into narrative madness. . .or maybe it wasn't. Signature bells and whistles remind the reader incessantly -- this is a novel, nothing but. Disquisitions follow on Love and Suicide and Buenos Aires is redeemed. One can't ask for much more. (unless one prefers an arc of narrative, rounded empathetic characters and a sense of episodic closure.)… (more)
Fewer

The sixty-five years of Washington by Juan José Saer
The private lives of trees by Alejandro Zambra
A thousand peaceful cities by Jerzy Pilch
To hell with Cronjé by Ingrid Winterbach
Klausen by Andreas Maier
7 more
Ergo by Jakov Lind
Zone by Mathias Enard
Vertical Motion by Can Xue
The ambassador by Bragi Ólafsson,
The selected stories of Mercè Rodoreda by Mercè Rodoreda
Gasoline by Quim Monz贸
Nazi literature in the Americas by Roberto Bolano
Fewer