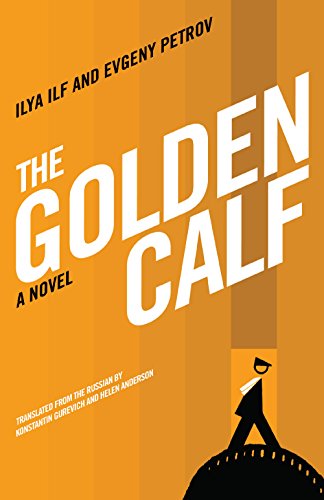 The golden calf : a novel

"A remarkably funny book written by a remarkable pair of collaborators."--New York Times Ostap Bender, the "grand strategist," is a con man on the make in the Soviet Union during the New Economic Policy (NEP) period. He's obsessed with getting one last big score--a few hundred thousand will do--and heading for Rio de Janeiro, where there are "a million and a half people, all of them wearing white pants, without exception." When Bender hears the story of Alexandr Koreiko, an "undercover millionaire"--no Soviet citizen was allowed to openly hoard so much capital--the chase is on. Koreiko has made his millions by taking advantage of the wide-spread corruption and utter chaos of the NEP, all while serving quietly as an accountant at a government office and living on 46 rubles a month. He's just waiting for the Soviet regime to collapse so he can make use of his stash, which he keeps hidden away in a suitcase. Ilya Ilf (1897-1937) andEvgeny Petrov (1903-1942) were the pseudonyms of Ilya Arnoldovich Faynzilberg and Evgeny Petrovich Katayev, a pair of Soviet writers who met in Moscow in the 1920s while working on the staff of a newspaper that was distributed to railway workers. The foremost comic novelists of the early Soviet Union (invariably referred to as Ilf & Petrov), the pair collaborated together for a dozen years, writing two of the most revered and loved Russian novels,The Twelve Chairs andThe Golden Calf, as well as various humorous pieces for Pravda and other magazines. Their collaboration came to an end following the death of Ilya Ilf in 1937--he had contracted tuberculosis while the pair was traveling the United States researching the book that eventually becameLittle Golden America. Konstantin Gurevich is a graduate of Moscow State University and the University of Texas at Austin. He translates with his wife, Helen Anderson. Both are librarians at the University of Rochester. Helen Anderson studied Russian language and literature at McGill University in Montréal. She translates with her husband, Konstantin Gurevich.… (more)

LibraryThing member gbill
More adventures with Ostap Bender, the protagonist of The Twelve Chairs and one of the great characters in Russian literature, resurrected here in The Golden Calf.

There is a lightness to this novel as it rollicks through Bender’s adventures, while at the same time satirizing the Soviet Union, religion, and stupidity in all forms. “I have developed very serious differences with the Soviet regime. The regime wants to build socialism, and I don’t,” says Ostap early on in the novel, to explain why he wants to get his hands on enough money to flee to Brazil. The con man comes to know of another con man who has amassed a hidden fortune while living the quiet and humble life of a clerk, and along with his cohorts, sets out to fleece him.

Ilf & Petrov write with intelligence, zaniness, and fun, particularly for their time. I loved the manager who has rubber stamps made to speed up how quickly he gets through notes that come across his desk, which start from things like “No objection” and “Make it happen”, progress to “Are they completely crazy?” and “Give me a break”, and finally a very large stamp with an all-purpose form letter. Something for everyone here.

Quotes:
On aspirations:
“Parallel to the big world inhabited by big people and big things, there’s a small world with small people and small things. In the big world, they invented the diesel engine, wrote the novel Dead Souls, built the Dnieper Hydroelectric Station, and flew around the globe. In the small world, they invented the blowout noisemaker, wrote the song Little Bricks, and built Soviet Ambassador-style pants. People in the big world aspire to improve the lives of all humanity. The small world is far from such high-mindedness. Its inhabitants have only one desire – to get by without going hungry.”

On communism:
“’The Soviet regime took everything from me,’ thought the former school district superintendent, ‘rank, medals, respect, bank account. It even took over my thoughts. But there’s one area that’s beyond the Bolshevik’s reach: the dreams given to man by God. Night will bring me peace. In my dreams, I will see something that I’d like to see.’
The very next night, God gave Fyodor Nikitich a terrible dream. He dreamt that he was sitting in an office corridor that was lit by a small kerosene lamp. He sat there with the knowledge that, at any moment, he was to be removed from the board. Suddenly a steel door opened, and his fellow office workers ran out shouting: ‘Khvorobyov needs to carry more weight!’ He wanted to run but couldn’t.
Fyodor Nikitich woke up in the middle of the night. He said a prayer to God, pointing out to Him that an unfortunate error had been made, and that the dream intended for an important person, maybe even a party member, had arrived at the wrong address. He, Khvorobyov, would like to see the Tsar’s ceremonial exit from the Cathedral of the Assumption, for starters.”

And:
“’In Soviet Russia, the only place where a normal person can live is an insane asylum,’ he said, draping himself in a blanket. ‘Everything else is super-bedlam. I cannot live with the Bolsheviks, no sir! I’d rather live here, among common lunatics. At least they aren’t building socialism. Plus, here they feed you, while out there, in bedlam, you need to work. And I have no interest of working for their socialism. Finally, I have my personal freedom here. Freedom of conscience, freedom of speech…’”

On laziness in marriage:
“Lokhankin brushed the crumbs off his beard, threw his wife a cautious, evasive glance, and quieted down on his couch. He really didn’t want to part with Barbara. Despite numerous shortcomings, Barbara had two very important merits: a large white bosom and a steady job. Basilius had never had a job. A job would have interfered with his reflections on the role of the Russian intelligentsia, the social group of which he considered himself a member. As a result, Lokhankin’s prolonged ruminations boiled down to pleasant and familiar themes: ‘Basilius Lokhankin and His Significance,’ ‘Lokhankin and the Tragedy of Russian Liberalism,’ ‘Lokhankin and His Role in the Russian Revolution.’”

On religion:
“The grand strategist didn’t care for Catholic priests. He held an equally negative opinion of rabbis, Dalai Lamas, Orthodox clergy, muezzins, shamans, and other purveyors of religion.
‘I’m into deception and blackmail myself,’ he said. ‘Right now, for example, I’m trying to extract a large amount of money from a certain intransigent individual. But I don’t accompany my questionable activities with choral singing, or the roar of the pipe organ, or silly incantations in Latin or Old Church Slavonic. I generally prefer to operate without incense or astral bells.’”… (more)
3 more
LibraryThing member russianlife
One of the true classics of Russian literature. Few works have "donated" so many trenchant phrases and words to the Russian language. If you want to understand modern Russia, you need to read this book. End of story.
LibraryThing member jonfaith
It is surprising that I didn't note this one previously. This wa spurchased in Chicago a few years back and read on a snowy afternoon. It is a terrific farce. This certainly was peril of sorts, gevent the hot water Shostakovich found himself in for chord changes.
LibraryThing member thatotter
Even funnier than Twelve Chairs, I think. A few special favorite moments:

Basically, there were quite a few lols.

You know, I really wish that , though I get that it couldn't happen.… (more)
Fewer

Ergo by Jakov Lind
The ambassador by Bragi Ólafsson,
To hell with Cronjé by Ingrid Winterbach
The sixty-five years of Washington by Juan José Saer
A thousand peaceful cities by Jerzy Pilch
6 more
Gasoline by Quim Monz贸
Klausen by Andreas Maier
The museum of eterna's novel : the first good novel by Macedonio Fernández
Landscape in concrete by Jakov Lind
Rupert : a confession by Ilja Leonard Pfeijffer
Season of ash : a novel in three acts by Jorge Volpi Escalante
Fewer