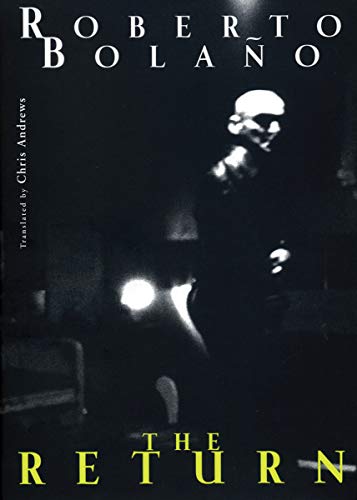 As Pankaj Mishra remarked inThe Nation, one of the remarkable qualities of Bolano's short stories is that they can do the "work of a novel."The Return contains thirteen unforgettable stories bent on returning to haunt you. Wide-ranging, suggestive, and daring, a Bolano story might concern the unexpected fate of a beautiful ex-girlfriend or a dream of meeting Enrique Lihn: his plots go anywhere and everywhere and they always surprise. Consider the title piece: a young party animal collapses in a Parisian disco and dies on the dance floor; just as his soul is departing his body, it realizes strange doings are afoot--and what follows nextdefies the imagination (except Bolano's own). Although a few have been serialized inThe New Yorker andPlayboy, most of the stories ofThe Return have never before appeared in English, and to Bolano's many readers will be like catnip to the cats.… (more)

LibraryThing member browner56
Art historians have a wonderful term for the preliminary drawings that the great Renaissance masters often rendered before starting work on their fresco or stained glass masterpieces: they call them cartoons. While some of these cartoons survived to become considered superb works in their own right—those by Michelangelo and Raphael, for instance—most merely served as models and outlines for the eventual finished products and are now long since forgotten.

This metaphor occurred to me frequently when reading “The Return,” a newly translated collection of short stories that Roberto Bolaño wrote in the middle of his too brief career. While a few of these stories are complete enough to serve as stand-alone compositions, most of the thirteen works felt like unfinished sketches that leave the reader hanging at the end and wanting more. The three works that were the most interesting and fully realized were “The Detectives,” which is written entirely as a conversation between two policeman recalling the fate of a political prisoner they both know (and seems to be based on Bolaño’s own experience), the unnerving “Murdering Whores” (whose original title, “Putas Asesinas,” sounds even cooler in Spanish), and “Buba,” an intriguing homage to soccer, black magic, and the city of Barcelona.

Apparently, an earlier collection of translated stories (“Last Evenings on Earth”) was produced from the same source material, which gives this volume something of the feel of a remainder bin. Still, Bolaño was a powerful writer whose style and imagination have been justly recognized over the last few years. Although most of these works seem incomplete—written cartoons, really—they nevertheless hint at masterpieces that lay just out of reach.… (more)
5 more
LibraryThing member railarson
The newest collection of the late Chilean author Roberto Bolaño’s short stories to be translated into English reads like a Cliff Notes introduction to the world he traveled in—and in his literature—populated. The Return is stuffed with whores and hit men, poets and porn stars, Communists and black marketers, ghosts and conjurers, and (of course) detectives.

The book kicks off with a pair of stories about misplaced foreigners in Russia, one by choice, and the other by bureaucratic snafu. In Snow, a Chilean ex-pat living in Barcelona tells the story of when he was “a trainer’s assistant for a man of dubious and disconcerting moral character” in post-Soviet Moscow.

Rogelio Estrada falls in with a gangster called “Billy the Kid” né Misha Pavlov and ends up procuring young women for him. “Pavlov’s taste in women was for athletes: long jumpers, sprinters, middle-distance runners, triple jumpers … but his real favorites were the high jumpers. He said they were like gazelles, ideal women, and he wasn’t wrong.”

Herein lies the rub: one Natalia Chuikova, who Estrada lovingly describes as “five-foot-ten and can’t have weighed more than 120 pounds. She had brown hair, and her simple ponytail gathered all the grace in the world. Her eyes were jet black and she had, I swear, the longest, most beautiful legs I have ever seen.” Let’s just say, that’s not the healthiest attention to detail for a hired goon to have.

Bolaño follows one tragic folly with another sketch told by the subject of 2666’s The Part about Amalfitano. Another Russian Tale follows a Spaniard captured while fighting with the Nazi Germans in a World War II footnote that I was unaware of. The Spanish Blue Division was a volunteer force sent by fellow fascist Franco on (according to Wikipedia) “condition they would exclusively fight against Bolshevism (Soviet Communism) on the Eastern Front, and not against the Western Allies or any Western European occupied populations.” Within such a historical anomaly lies the kernel of a tragic novel in its own right, but Bolaño purposefully crash lands the premise, turning the man’s fate on a linguistic misunderstanding of a sputtered epithet.

Detectives, the piece in this collection that best shows off Bolaño’s singular talent is written entirely as an extended dialogue between two policemen pulling duty in a Chilean jail. Bolaño slips in exposition, politics, and world history all without letting the conversation seem forced or false. His own literary counterpart, Arturo Belano—co-founder of Visceral Realism and co-hero of The Savage Detectives—makes an appearance as little more than an apparition, but one real enough to shake one of the detectives out of his comfortable stupor.

And while we’re on the subject, Murdering Whores paints the gruesome picture of a prostitute who singles out a guy coming out of a soccer match, kidnaps him, and tortures him to death. I read somewhere that this collection was originally named after this story: Putas Asesinas. I think it sounds better in Spanish.

Ghosts real and imagined flit thematically throughout these tales, some of them merely glimpsed and some of them fully present and pissed off. The way that the specter of death hangs over this book, one can’t help but wonder if Bolaño was working through his own approaching mortality, picking it up and observing it from every angle. One hopes that he didn’t become like the ghost that narrates the title piece. “I have good news and bad news,” he begins. “The good news is that there is life (of a kind) after this life. The bad news is that Jean-Claude Villeneuve is a necrophiliac.”

These are deceptive works, with subjects not quite expressed but hovering somehow on the edge of the readers' consciousness. Often this can be understood as the pain of dislocation and exile resulting from political horror at home. Or maybe these characters would be as they are in any location, but they, and we, will never know. Wherever stories are set we find a warm appreciation of place. Writing and its centrality to life is another presence in the wings of these stories, not quite on stage.

As always, Chris Andrews' translation is invisible and manages to include everything we need to know effortlessly, without dreaded footnotes that tear us out of the fiction world.

"Detectives" and "Buba" stand out slightly in my mind, yet all were satisfying, including the most elusive and inconclusive.… (more)
LibraryThing member shadowofthewind
My exploration into Bolano’s writing is mostly backwards. I started with 2666, loved it and read The Savage Detectives, loved it and read By Night in Chile, and then by chance found this collection of short stories entitled The Return. It’s mostly his short stories from the 1990s compiled and translated by Chris Andrews, an excellent collection. In reading Bolano backwards, I can see where he used certain elements from these stories into his later works. 2666 and The Savage Detectives are his masterpieces and by reading short stores contained in The Return, you can see early permutations of certain characters and elements. Lalo Cura is a character in 2666 and of course Arturo Belano is a Bolano alter-ego used in several of his works, most notably, The Savage Detectives. My favorite stories were William Burns (which reminded me of some of the murder mystery of Santa Theresa subplot in 2666) Detectives, (which shows up in The Savage Detectives broken up into many forms), and Buba, just for the simplicity of the story and the mystery of the ending. Excellent stories for diehard Bolano fans!… (more)
LibraryThing member Mrs_McGreevy
A collection of short stories from the late Bolano. It's odd that, for me, at least, Bolano doesn't sing until he taps into the life of woman who's had enough of the macho BS culture (“Murderous Whores”). There's a tenderness when he writes as a woman (even a murderous one) that he generally doesn't allow himself when he writes as a man (exceptions would be “Buba,” a soccer-themed story of brotherhood and magic, and “Prefiguration of Lalo Cura,” about a boy raised on porn sets). Bolano is angry and harder-edged than most of the more well-known Latin American writers, and he's not shy about expressing his disdain for most of them.… (more)
LibraryThing member soylentgreen23
Short stories that have Bolano's voice but not necessarily the panache of other collections.
Fewer