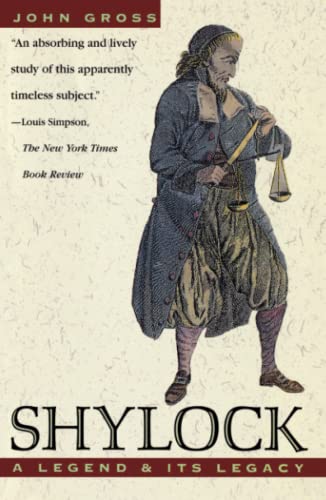 Shylock: A Legend and Its Legacy

Never has one character of the stage provoked such controversy or achieved such infamy as Shakespeare's enigmatic Shylock. For four centuries the money lender of "The Merchant of Venice" has been reinvented as both villain and victim, as an object of tragedy and comedy, and has been used as an economic symbol and often as a lightning rod for anti-Semitism. But what was Shakespeare's attitude toward the character described on the play's title page in 1600 as "a man of extreme crueltie," and what should be our own? With brilliant historical perspective and insight, theater critic John Gross explores the complex and influential history that has given Shylock a life beyond the play and established him as a figure of world mythology. Illuminating Shylock's evolution on the stage, his importance to writers and psychologists, and his enduring influence on society and culture, John Gross sheds as much light on our own shifting attitudes and beliefs as on the rich and disquieting figure Shakespeare created.… (more)

Reinventing Shakespeare : a cultural history, from the Restoration to the present by Gary Taylor
Shakespeare : the invention of the human by Harold Bloom