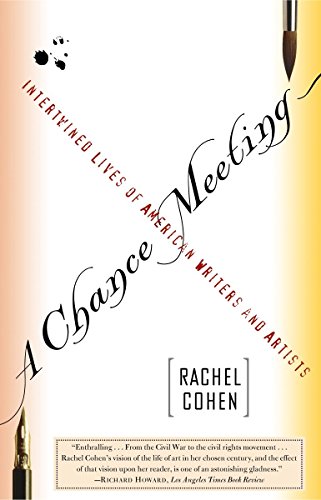 A Chance Meeting: Intertwined Lives of American Writers and Artists

Each chapter in this remarkable consideration of American culture evokes an actual meeting between two historical figures. In 1854, as a boy, Henry James has his daguerreotype made by Mathew Brady. We encounter Brady again as he photographs Walt Whitman and then Ulysses Grant. Meanwhile, Henry James begins a lasting friendship with William Dean Howells, and also meets Sarah Orne Jewett, who in turn is a mentor to Willa Cather... Steichen and Alfred Stieglitz; Carl Van Vechten and Gertrude Stein; Hart Crane and Charlie Chaplin; Langston Hughes and Zora Neale Hurston; Elizabeth Bishop and Marianne Moore; Richard Avedon and James Baldwin; and John Cage and Marcel Duchamp; Norman Mailer and Robert Lowell. Ultimately, Cohen reveals and long chain of friendship, rebellion and influence stretching from the moment before the Civil War through a century that had a profound effect on our own time. A Chance Meeting is an intimate and original act of biography and cultural history that makes its own contribution to the tradition about which Cohen writes.… (more)

LibraryThing member bnbookgirl
An interesting look at chance meeting between some of the literary worlds most prominent figures; Henry James, Mark Twain, WIlla Cather, and many others fill these pages with wonderful stories of friendship, commraderie, and the power of chance.

Bloomsbury Pie: The Making of the Bloomsbury Boom by Bloomsbury
Greene on Capri : a memoir by Shirley Hazzard
Proust at the Majestic : the last days of the author whose book changed Paris by R. P. T. Davenport-Hines
Through the Dark Labyrinth: A Biography of Lawrence Durrell by Gordon Bowker
Two lives : Gertrude and Alice by Janet Malcolm
2 more
Partisans: Marriage, Politics, and Betrayal among the New York Intellectuals by David Laskin
Marcel Proust by Edmund White
Fewer