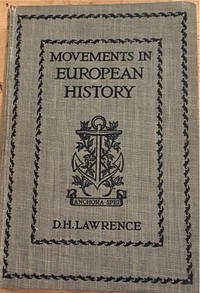 Movements in European History was written by D. H. Lawrence during 1918 and 1919 in response to Oxford University Press's invitation to prepare a textbook for schools. It is a vivid sketch of European history from ancient Rome to the early twentieth century, remaining significant in the canon of Lawrence's work as the only school textbook he ever wrote. Crumpton's introduction describes the genesis, publication and reception of the book, gives an account of the little-known Irish edition of 1926 which suffered much censorship, and identifies and analyses Lawrence's methods of using the source-books on which his writing was based. This edition uses the surviving manuscript to present a text as close to that which Lawrence wrote and corrected in proof as is now possible.… (more)

was a school textbook, originally published by Oxford University Press, by the English author D. H. Lawrence. At the time Lawrence was facing destitution and he wrote this as a potboiler. The first edition was published under the pseudonym, Lawrence H. Davison, because his fictional works, such as The Rainbow, had been prosecuted for alleged eroticism.

The global age : Europe, 1950-2017 by Ian Kershaw
Masters of the Universe: Hayek, Friedman, and the Birth of Neoliberal Politics by Daniel Stedman Jones
The nice and the good by Iris Murdoch
Men at Arms by Evelyn Waugh