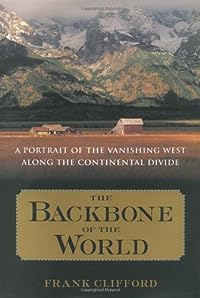 The backbone of the world : a portrait of a vanishing way of life along the Continental Divide

In recent years, Los Angeles Times writer and editor Frank Clifford has journeyed along the Continental Divide, the hemispheric watershed that spans North America from the alkali badlands of southernmost New Mexico to the roof of the Rockies in Montana and into Canada. The result is The Backbone of the World, an arresting exploration of America's longest wilderness corridor, a harsh and unforgiving region inhabited by men and women whose way of life is as imperiled as the neighboring wildlife. With the brutal beauty and stark cadences of a Cormac McCarthy novel, The Backbone of the World tells the story of the last remnants of the Old West, America's mythic landscape, where past and present are barely discernible from one another and where people's lives are still intrinsically linked to their natural surroundings. Clifford vividly captures the challenges of life along the Divide today through portraits of memorable characters: a ranching family whose isolated New Mexico homestead has become a mecca for illegal immigrants and drug smugglers; a sheep herder struggling to make a living tending his flock in the mountains above Vail, Colorado: an old mule packer who has spent years scouring the mountains of northwest Wyoming for the downed plane of his son; a Yellowstone Park ranger on a lone crusade to protect elk and grizzly bears from illegal hunters; and a group of Blackfeet Indians in northern Montana who are fearful that a wilderness sanctuary will be lost to oil and gas development. In each of their stories, the tide of change is looming as environmental, economic, social, and political forces threaten this uniquely unfettered population. Clifford's participatory approach offers a haunting and immediate evocation of character and geography and an unsentimental eulogy to the people whose disappearance will sever a link with the defining American pioneer spirit. Set in a world of isolated ranches, trail camps, mountain bivouacs, and forgotten hamlets, The Backbone of the World highlights the frontier values that have both ennobled and degraded us, values that symbolize the last breath of our founding character.… (more)

Lasso the wind : away to the New West by Timothy Egan
Great Plains by Ian Frazier
Roads : Driving America's great highways by Larry McMurtry
Wide skies : finding a home in the West by Gary H. Holthaus
The Good Rain: Across Time & Terrain in the Pacific Northwest by Timothy Egan
1 more
Hunting Mister Heartbreak : a discovery of America by Jonathan Raban
Fewer