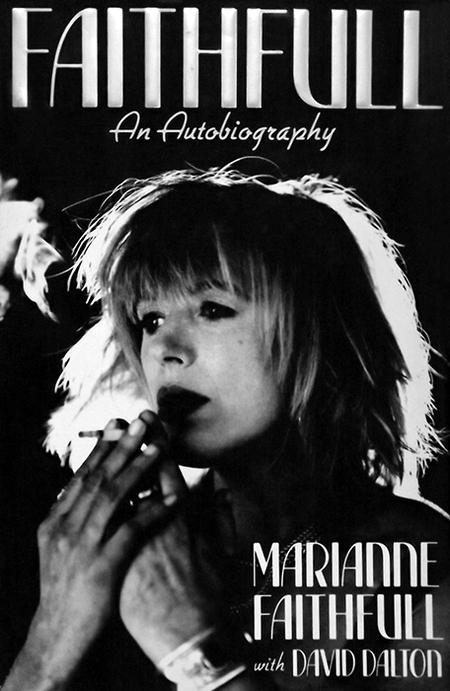 From pop stardom through the depths of addiction to her punk-rock comeback, Marianne Faithfull's life captures rock 'n' roll at its most decadent and its most destructive. Faithfull's first hit, 1964's "As Tears Go By," opened doors to the hippest circles in London. There she frolicked with the most luminous of the young, rich, and reckless, including Bob Dylan, the Beatles, and the Rolling Stones. Her legendary affair with Mick Jagger produced one hit single, "Sister Morphine," and countless headlines. Faithfull left the relationship a strung-out junkie. Struggling to kick drugs and revive her musical career, she recorded Broken English in 1979, an edgy, hard-hitting, critical triumph. As honest in her autobiography as in her music, Faithfull is a searing, intimate portrait of a woman who examines her adventures and misadventures without flinching, without apology.… (more)

LibraryThing member FicusFan
An auto-biography of someone whose only claim to fame was that at one time she was Mick Jagger's GF. She did sing and record on her own, but it was not really serious, just something they could market. In her later life she went back to singing, writing and performing, but I can't say I ever heard of anything she did.

The heart of the book is her involvement with Mick and the Stones. In this type of book you can either be specific : he said, she said, or be vague. She has chosen to be vague, so the book isn't a hatchet job, but it does mean she seems fake. Her motives are explained in catch phrases and clichés. She seems not only detached from her life but from the book.

At several times she says one thing and later in the text she says something different about the same subject. She also seems to have no real feelings about anyone but herself. She also continually makes a big deal of her aristocratic pedigree, and what she read as though it made any difference in her life. She claims to have been the passive victim of everything but she doesn't blame others for her problems, just herself.

She didn't really have anything new to say about the London scene, though some of what she did say contradicted what others have said - some of the others were the actual people involved.… (more)
2 more
LibraryThing member allison.sivak
Of course I wanted to read this for the gossip. I liked how Faithfull wrote about herself in a wry, sometimes regretful, but honest manner. My favourite aspect of the book is the quote from Anita Pallenberg on the back cover: "Marianne has always been cruel -- particularly to herself. This is a delightful book."
LibraryThing member Big_Bang_Gorilla
Being the memoirs of the famed rock singer and composer, who is unfortunately remembered more for being Mick Jagger's muse and lover than her own solo recordings of the eighties and nineties, which enjoyed considerable popularity and were very justly critically acclaimed. As a tell-all this is decent if one doesn't mind a certain peculiar mixture of self-pity and spleen--a mixture also prominent in her songs, so presumably fans of her music won't object to it here. The book is even better, though, when it sticks to her own creative processes and moves away from the Stones metier.… (more)
Fewer