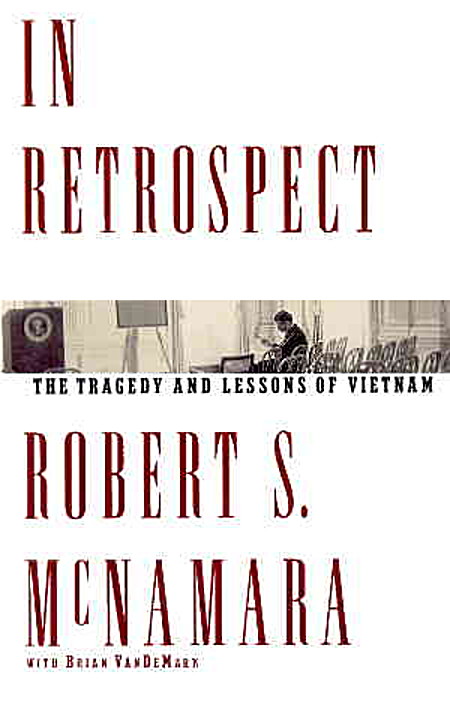 In retrospect : the tragedy and lessons of Vietnam

#1 NATIONAL BESTSELLER. The definitive insider's account of American policy making in Vietnam. "Can anyone remember a public official with the courage to confess error and explain where he and his country went wrong? This is what Robert McNamara does in this brave, honest, honorable, and altogether compelling book."--Arthur Schlesinger, Jr. Written twenty years after the end of the Vietnam War, former Secretary of Defense Robert McNamara's controversial memoir answers the lingering questions that surround this disastrous episode in American history. With unprecedented candor and drawing on a wealth of newly declassified documents, McNamara reveals the fatal misassumptions behind our involvement in Vietnam. Keenly observed and dramatically written, In Retrospect possesses the urgency and poignancy that mark the very best histories--and the unsparing candor that is the trademark of the greatest personal memoirs. Includes a preface written by McNamara for the paperback edition.… (more)

LibraryThing member cwhouston
If only more key decision makers on the world stage would make similar literary undertakings. This is RS McNamara's account of his early career and subsequent term as Secretary of Defence under presidents Kennedy and Johnson, focussing on the Vietnam war.

There is not much in way of new material or revelations, but it does provide the reader with an insight that cannot be gained by reading other books covering the same area. The main text is followed by extensive appendices covering other interesting material such as McNemara's role as head of the world bank and he has some interesting suggestions about ensuring nuclear non-proliferation. Personally, I would liked to have read more details about McNamara's relationships with other officials.

McNamara's writing style is easy to follow and I'd suggest that this is one of the most digestible accounts of the how the US administration handled the conflict.… (more)
4 more
LibraryThing member Angelic55blonde
This is a great memoir by an influential man who was uniquely involved in the whole Vietnam issue. He writes with candor and reflection. Even though this is a memoir you don't get the sense that he is trying to gloss over the "bad" parts or minimize his mistakes. He freely says "this was a huge mistake on my part" (or on Kennedy's part). He gives thorough explanations of why certain decisions were made and what he wish he would have done.

I highly recommend this for not only the people interested in Robert S. McNamara or this time period but for everyone in general since we need to learn our mistakes as a nation that way we do not repeat them (look at Iraq right now).

There is also a documentary, which is a 2 hour interview with Robert S. McNamara that I believe is called "in retrospect" and it focuses on Robert S. McNamara's lessons he learned in Vietnam. I may have the title of the movie wrong but I highly recommend you pick up that movie after you read this book.… (more)
LibraryThing member JustMe869
You almost, but not quite, feel sorry for McNamara as he whines about how the Vietnam War wasn't his fault.
LibraryThing member carterchristian1
An essential resource for history of the U.S. participation in the Vietnam war. McNamara gives candid assessments of Johnson and other American participants. Frequently he lays out a situation then makes a clear statement if he thought at the time or later if the action taken was correct or a mistake. What comes up time and again is the wish to understand U.S. goals. The language is much that of the participants in Iraq and Afghanistan.… (more)
LibraryThing member Waltersgn
Memoir of one of the architects of the Vietnam War
Fewer

Argument without end : in search of answers to the Vietnam tragedy by Robert S. McNamara
The Haldeman diaries : inside the Nixon White House by H. R. Haldeman
Diplomacy by Henry Kissinger
Means of ascent by Robert A. Caro
Nixon and Kissinger : partners in power by Robert Dallek
6 more
Bush at war by Bob Woodward
State of denial by Bob Woodward
The 25-year war : America's military role in Vietnam by Bruce Palmer
Truman by David G. McCullough
The death of a president, November 20-November 25, 1963 by William Manchester
Shadow : five presidents and the legacy of Watergate by Bob Woodward
Fewer