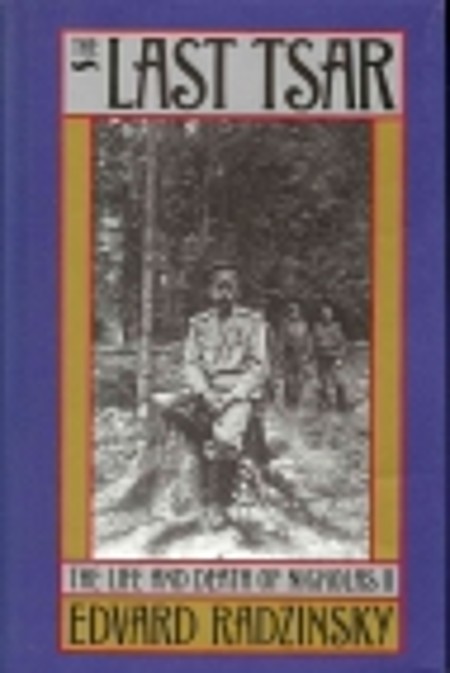 The last tsar : the life and death of Nicholas II

Biography of Tsar Nicholas II providing a portrait of the monarch and detailed account of his last days and assassination. The execution of Tsar Nicholas II and his family at the hands of revolutionaries in 1918 is one of the pivotal events of the 20th century, an event that brought the 300-year rule of the House of Romanov to a brutal and tragic end and set the tone for the Stalinist atrocities that would follow. The truth behind these murders remained long buried under more than seventy years of myth, legend, and speculation. Then, in a sensational biography that could not have been written before glasnost, noted Russian historian Edvard Radzinsky unearthed solutions to many of the questions that had remained unanswered since the terrible events in Ekaterinburg on the night of July 16-17, 1918. Mining sources long unavailable--including firsthand accounts of the slaying--he creates both a fascinating portrait of the monarch and a minute-by-minute account of his terrifying last days. Included is documentation linking the order of execution directly to Lenin, as well as the suggestion that two family members may have survived the ordeal. Included, too, is the testimony of ordinary Russians who at last felt free to contribute their own recollections, documents, and handed-down secrets. Radzinsky weaves together scores of firsthand accounts into a haunting, epic narrative. The Last Tsar is an important and momentous work, one that will stand as the definitive account of the terrible last days of one of Europe's greatest dynasties.--Adapted from dust jacket.… (more)

LibraryThing member bcquinnsmom
As I noted somewhere before, I continue to be fascinated with the Bolshevik Revolution of 1917, with the whole history of the Russian czars and with the arrest and deaths of the last Czar, Nicholas II, and his family. Rather than a dry history, Radzinsky uses documents that were opened from archives, personal histories & diaries from those involved in the assassinations and from Nicholas & Alexandra themselves to create a very good study of what actually happened to Nicholas II and his family. After having read through the end, I was left with a vivid picture of what were the final days of the Romanovs. His research seems to be incredibly thorough.

Radzinsky is a playwright; his book comes out not in a general tone most often taken by historians -- it is very readable. Thank God there was a family tree showing both Nicholas & Alexandra's families in the front cover; I would have been totally lost without it. As it was, I probably should have xeroxed it instead of flipping back to it time after time, because I really needed it. I think it probably could have also used a map.

While the book has a few problems, overall it was very well done & a very welcome addition to my history library.… (more)
6 more
LibraryThing member beadinggem
The author's writing style was rather jarring but otherwise, this Russian writer's meticulous research into the life and times of Nicholas II and the tragic end of him and his family was superb.
LibraryThing member Pippilin
Interesting, but the author plays a little fast and loose with facts.
LibraryThing member ablueidol
Pacey written history that mixes eye witness accounts with written sources to explore how the royal family were a factor in their downfall as well as speculation that some members survived
LibraryThing member everfresh1
This book is not so much about life of Nicholas II as about his death. The first half of the book is just a prologue to the events and people surrounding his death - which take the whole second half. It is interesting and intriguing and well researched but I had different expectations. I expected it to be a study of Nicholas II life in the context of political environment and events - and there were so many important events. It's all has been mentioned but very briefly, without going into details. Much more emphasize has been put on personality of Nicholas II, and especially his relationship with Alix. Which is all good and interesting but not enough.… (more)
LibraryThing member KatieBrugger
How do you make a story suspenseful when everyone knows how it ends? Mr. Radzinsky solved this problem in The Last Tsar by writing a historical-detective tale. The death of Russia’s last tsar, along with that of his family, is told largely through actual documents: diaries and letters of the tsar and his wife, and painstakingly uncovered reports from the Soviet archives. In addition, there are interviews with people who contacted Mr. Radzinsky after he began publishing articles in Russia about the tsar’s execution.

The Soviet state was highly secretive and paranoid, and the details of the tsar’s death had been buried. So the public record on the execution was skeletal: the world knew the family had been killed, but that was about it. Mr. Radzinsky builds the story slowly, so that even on the last pages of this 400-page book the reader still learns new, fascinating details.

I was intrigued with the Soviet Union when I was younger. I spent six weeks in 1979 traveling through the western part of Russia; I could speak Russian at the time. I have studied Russian and Soviet history, but my attention when I read about the Russian revolution was always on the Bolsheviks. I had never read about this event from the tsar’s point of view.

What becomes clear is that the tsar and his wife were detached from reality. They traveled between their palaces, took trips on the royal yacht, and held balls. They lived in a dream world that they thought would never end, even though the warnings couldn’t have been clearer. The French Revolution was an obvious cautionary tale, but closer to home, Nicholas’ grandfather had been assassinated in 1881, and in 1905 there was a mini-Russian revolution. But because Nicholas and Alexandra were so oblivious in their dream world, they never stopped fighting the prospect of a constitution and a constituent assembly.

The tsaritsa was the worst. All she could think of was getting her son on the throne. The disaster of her relationship with Rasputin was her desperate attempt to keep the hemophiliac heir well enough to rule one day. In addition, she wanted him to have absolute power.

When the tsar and his family were arrested and sent to Siberia (Tobolsk), it’s hard to believe how thoroughly they were abandoned. It appears that no one tried to rescue them. It also seems that they could have escaped and didn’t, in part because there was no one who cared enough about them to help, and also because the tsar felt he belonged to Russia and couldn’t leave her. Not to mention their faith: God was on their side and whatever happened was His will.

If you’re interested in details about how the tsar lived you’ll have to look elsewhere. You also won’t learn much about the Soviet revolution—other than the fascinating detail that the Bolsheviks were close to losing power in 1918; they were almost defeated in the civil war that erupted after the Revolution. The executions took place a day or two before the White Russians took the town where the royal family had been held captive.
This isn’t an easy book, but if you like history it’s definitely worth the read.
… (more)
LibraryThing member mountianash
Good book great photos,but it made me cry.
Fewer

The Romanovs : the final chapter by Robert K. Massie
A lifelong passion : Nicholas and Alexandra :their own story by Emperor of Russia Nicholas
Rasputin : the last word by Edvard Radzinsky
Former people : the final days of the Russian aristocracy by Douglas Smith