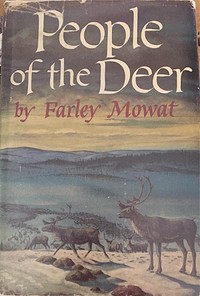 People of the Deer

The classic first book from one of the world's best-loved storytellers, Farley Mowat's unforgettable account of a people driven nearly to extinction by the trespasses of Western culture In 1886, the Ihalmiut people of northern Canada numbered 7,000 souls; by 1946, when twenty-five-year-old Farley Mowat began a two-year stay in the Arctic, their population had dwindled to only forty. Living among them, he observed for the first time a sight that would inspire the rest of his life: the millennia-old migration of the Arctic's caribou in their teeming multitudes. With the Ihalmiut, Mowat also endured bleak winters, suffered agonizing shortages of food, and witnessed the continual, devastating intrusions of interlopers bent on exploitation. Here, in the first book to exhibit the prodigious literary talent that would produce some of the most memorable books of the next half-century, Mowat chronicles his harrowing experiences. People of the Deer is the lyrical portrait of a beautiful and endangered society, and a mournful reproach to those who would manipulate and destroy indigenous cultures anywhere in the world. Most of all, it is a tribute to the last People of the Deer, the Ihalmiut, whose calamitous encounter with modern civilization resulted in their tragic decline.… (more)

LibraryThing member Pferdina
Farley recounts two years he spent living among the Ihalmiut, an Inuit culture of the Canadian arctic who subsist almost entirely on caribou. The people were reduced to a few dozen when he visited them in the late 1940s, after several decades of starvation and dependence on fur trading for access to guns, ammunition, and southern foodstuffs. Mowat sincerely and poignantly argues for greater government assistance to these people, in the form of reindeer herding, before they are all gone.… (more)
7 more
LibraryThing member Larry1w1
Thought provoking and unfortunatly still relevante to-day.
LibraryThing member mahallett
a very sad story--a people and a culture dying.
LibraryThing member Sandydog1
A great conservation story.
LibraryThing member TimBazzett
PEOPLE OF THE DEER, by Farley Mowat.

In Canada, Farley Mowat was something of a revered national treasure for close to sixty years, right up until his death last year. Although he authored forty books or more, here in the U.S. he is probably known mostly for his book NEVER CRY WOLF, which was also adapted into a cinematically beautiful film. I read that book probably thirty years ago and loved it. More recently I had read a couple of his other memoirs, BORN NAKED and AND NO BIRDS SANG, in which he wrote of his childhood in Saskatchewan and then of his wartime service in Italy and Europe. This book, originally published in 1952, has stayed in print in numerous editions ever since. In PEOPLE OF THE DEER, Mowat tells of his sojourn in the Canadian Barrens in 1947 and '48, not long after he returned from the war. He lived during that time with the nearly extinct Eskimo tribe the Ihalmuit, the 'other people.' An inland tribe, their culture differed most markedly from the coastal Inuits in that they depended on caribou - 'the deer' - for almost all of their needs. The intrusion of the white men, who urged them to trap furs to exchange at trading posts, which diverted them from their deer-centered culture, was the beginning of the end. Sickness and famine decimated the Ihalmuit people, and Mowat was there in their last days, to document their customs, language and stories, and bear witness to their tragic extinction. (By the 1950s the Ihalmuits were nearly gone.) The story is, of course, heartbreaking. But it is also a study in the gorgeous kind of writing that made Mowat famous. The photographs and Samuel Bryant's line drawings (in this 2005 reprint from Carroll & Graf Publishers) serve to further enhance Mowat's stirring narrative. A great book. Highly recommended.… (more)
LibraryThing member LibraryCin
In the late 1940s, Farley Mowat spent a couple of years in Northern Canada (what would be part of Nunavut now). This recounts his time there, spent with the local Inuit. He tells the story of the people and also explains the habits of the “deer” (caribou).

I like Farley Mowat, but (no surprise) I definitely prefer his books when the focus is on animals. In this book, I really enjoyed the parts about the caribou, but the rest varied – some of it held my interest and other parts didn't. I was impressed with his suggestions to help the people at the end of the book, though (and it's sad to see some things still haven't changed).… (more)
LibraryThing member BookConcierge
People of the Deer – Farley Mowatt
4****

From the Forward - On an evening when the sun hovered above the horizon’s lip, I sat beside a man who was not of my race, and watched a spectacle so overwhelming in its magnitude that I had no words for it.
Below us, on the undulating darkness of the barren plains, a tide of life flowed out of the dim south and engulfed the world, submerged it so that it sank beneath a living sea. The very air was heavy with the breath of life itself. There was a sound of breathing and of moving that was like a rising wind. It was as if the inanimate and brutal crust of rock had been imbued with the essential spark and had risen from its ageless rigidity to claim the rights of life.

Farley Mowatt went into the vast Barren Plains of North central Canada to study the caribou, and the Ihalmiut people who depended on “the deer” for their very existence. He lived among them in the late 1940s, when their tribe had dwindled from several thousand in about 1900 to less than 50 individuals in 1947. Mowatt examines the various factors that led to the demise of The People of the Deer in this fascinating book.

He spends a significant part of the book imparting some of the traditional stories of the Ihalmiut people, and when so doing, uses a completely different style and syntax. I felt as if I were sitting by a campfire, listening to an oral history; I was captivated and intrigued. But I still preferred those section when Mowatt was writing as himself. His writing about the landscape is poetic, and puts me smack dab in the middle of the Barrens with him. For example:

There was an absolute and tangible silence, broken only by the fluid dip of paddles and the gentle mutter of water underneath the bow of the canoe. The lake itself was frozen in the dead, unearthly grip of perfect calm.
Islands rose suddenly before us, like surfacing sea monsters. They appeared soundlessly, lifted clear of the horizon, then floated faintly in the sky as their mirage images dissolved. The shore drew away from us and twisted so that its low, uncertain progress gave us no clear conception of whether it was one mile or ten miles away. Angkuni lost all semblance of reality and of concrete form. Its shores and islands had an amorphous quality which defied the eye and left the mind with no clear memory of what has passed astern of the canoe.

The events described in the book occurred nearly 70 years ago, and I have little idea how things may have changed (or if they have changed at all) for the Ihalmiut and other native peoples. I could not help but think about global warming, the loss of habitat, the expansion of technology, etc. in the 21st century. The time of the People of the Deer must surely be past, and that saddens me.… (more)
LibraryThing member mahallett
a very sad story--a people and a culture dying.
Fewer