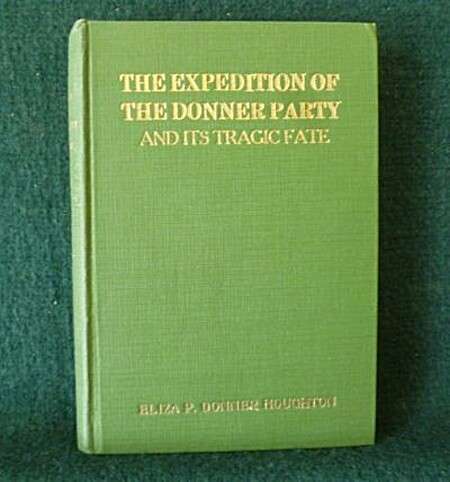 The expedition of the Donner Party and its tragic fate

George and Tamsen Donner and their children, among the very first to leave from Illinois, joined emigrants headed to California in the spring of 1846. Beyond Fort Bridger, Captain Donner led a large party through a much-advertised shortcut. Delays and difficulties caused them to be snowbound in the High Sierras, facing the grim specter of starvation and extreme suffering.   Though only four years old at the time of the expedition, the captain's youngest daughter, Eliza Donner, would never forget the excitement of crossing the prairies--or the horror of that winter. Details impressed on her young mind were later substantiated by the recollections of her older sisters and other survivors. Her book, originally published in 1911, is an intimate and authoritative account of the Donner disaster. George and Tamsen Donner and those who shared their fate are fully humanized in the telling. Eliza also relates what happened to her and a sister after being rescued and what it was like to grow up in a world that turned the Donners into a grisly legend.… (more)

LibraryThing member setnahkt
Yet another Donner book, The Expedition of the Donner Party and Its Tragic Fate is by Eliza Donner Houghton, an authentic survivor of the party. However, Ms. Houghton was four years old when she was carried out of the Sierras; her book wasn’t published until 1879, more than 30 years after the event. This makes me wonder how much of Ms. Houghton’s account came from her own memory and how much was pieced together from other Donner Party narratives – especially those of Charles McGlashan (see above), who was a frequent correspondent and visitor.


Perhaps confirming this supposition, only about a third of the book actually concerns the Donner Party and its rescue; the remainder is Ms. Houghton’s reminiscences of growing up in California as an orphan. Eliza and her sister Georgia were taken in by an elderly Swiss immigrant couple, the Brunners, who had a thriving business selling milk and cheese and running a bar. Eliza portrays herself as an impressionistic and unprejudiced child, commenting without censure on the habits of local Indians and “Spanish”; Ms. Brunner comes across as a termagant, treating Eliza as little better than hired help (at least, in Eliza’s memory). Eliza and Georgia weren’t allowed to have toys, that being frivolous in Ms. Brunner’s opinion; and when she discovered the children made some dolls by dressing old bottles in cloth scraps they were punished and their “bottle babies” were confiscated and put to use as containers. Ms. Brunner also disapproved of school for girls, so their education was scanty. Eliza and Georgia were eventually taken in by their sister and brother-in-law, after a hostile confrontation with Grandma Brunner, who had been lead to believe that the girls were “badmouthing” her and was enraged at their ingratitude. (It seems that the Brunners had accumulated quite an estate by now and a certain Widow Stein attempted to get them to disown the Donner girls and adopt her own son Johnnie as their heir, and thus tried to poison Grandma Brunner against them). Eliza married Sherman Houghton in 1861 and ends her narration then; Mr. Houghton was a prominent lawyer and served several terms in Congress as a California representative.


In the 1870s, stories about the Donner Party – often sensational – appeared in the news again, and Charles McGlashan looked up Eliza Donner Houghton to get her story. Her response appears as an appendix; her main concern seems to be refuting stories that the entire Donner party had turned to flagrant cannibalism and that her mother’s and father’s dismembered and partially consumed bodies had been found scattered around their camp site. She narrates a strange three-way meeting between her, Charles McGlashan, and Louis Keseberg; Keseberg was found alive by the last relief party to reach the Donner campsites and was almost universally believed to have killed and eaten Tamsin Donner, Eliza’s mother (Keseberg sued some of his accusers for slander, and won; he was awarded $1 in damages). At any rate, he got on his knees and convinced Eliza that her mother had died a natural death (although McGlashan remained skeptical).


Not much of an addition to Donner lore, given the likelihood of faulty memory; of some interest for childhood life in early California.… (more)

George and Tamsen Donner and their children, among the very first to leave from Illinois, joined emigrants headed to California in the spring of 1846. Beyond Fort Bridger, Captain Donner led a large party through a much-advertised shortcut. Delays and difficulties caused them to be snowbound in the High Sierras, facing the grim specter of starvation and extreme suffering. Author was 4 years old during the trip
non-circulating

The indifferent stars above : the harrowing saga of a Donner Party bride by Daniel Brown
Westward vision; the story of the Oregon Trail by David Lavender
Handcarts to Zion, the story of a unique western migration, 1856-1860, with contemporary journals, accounts, reports; and rosters of members of the ten handcart companies by LeRoy R. Hafen