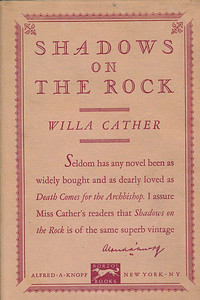 Shadows on the rock

Shadows on the Rock, written after Willa Cather discovered Quebec City during an unplanned stay in 1928, is the second of her "Catholic" historical novels and reflects her fascination with finding a little piece of France in eastern Canada. Set in the late seventeenth century, the novel centers on the activities of the widowed apothecary Euclide Auclair and his young daughter, Cecile. To Auclair's house and shop come trappers, missionaries, craftsmen, the indigent--those seeking cures, a taste of France, or liberation from the corruptions caused there by the excesses of the French court. Set against these fictional characters, historical personages such as Bishop Laval, Count Frontenac, and others contend in the political life of the vast colony.   This edition, which is approved by the Modern Language Association, will be of special importance to Cather scholars. Not only is Cather's mining of historical sources explored in extensive explanatory notes, but a recently discovered reworked draft of the novel has been incorporated into the textual analysis. There is also a generous illustration section with maps of the setting.… (more)

LibraryThing member gbill
I read this book while traveling in Quebec and recommend it. There are many shocking bits, but Cather states them simply and they are true to life in 17th century Quebec: kids drinking wine or brandy, the belief that the Indians were savages, eating cold grease to get through winter, cauterizing the arm to treat a leg injury, jars of pulverized human skulls at the apothecary shop, vows of absolute silence, cannibalism, torture, ....

And yet, the hardiness of the people enable them to endure so far from France; some excerpts:

"Why, the priest wondered, were these fellows always glad to get back to Kebec? Why did they come at all? Why should this particular cliff in the wilderness be echoing tonight with French songs, answering to the French tongue? He recalled certain naked islands in the Gulf of St. Lawrence; mere ledges of rock standing up a little out of the sea, where the sea birds came every year to lay their eggs and rear their young in the caves and hollows; where they screamed and flocked together and made a clamor, while the winds howled around them, and the spray beat over them. This headland was scarcely more than that; a crag where for some reason human beings built themselves nests in the rock, and held fast. ... A little group of Frenchmen, three thousand miles from home, making the best of things, - having a good dinner. He decided to go down and join them".

"These coppers, big and little , these brooms and clouts and brushes, were tools; and with them one made, not shoes or cabinet-work, but life itself. One made a climate within a climate; one made the days, - the complexion, the special flavour, the special happiness of each day as it passed; one made life".

"A feeling came over her that there would never be anything better in the world than this; to be pulling Jacques on her sled, with the tender, burning sky before her, and on each side, in the dusk, the kindly lights from neighbors' houses".

"There was something in Saint-Vallier's voice as he said this which touched Auclair's heart; a note humble and wistful, something sad and defeated. Sometimes a neighbour whom we have disliked a lifetime for his arrogance and conceit lets fall a single commonplace remark that shows us another side, another man, really; a man uncertain, and puzzled, and in the dark like ourselves".

I'm told the title of the book is derived from a sundial in a Quebec seminary courtyard which reads "Dies nostri quait umbra", or, "Our days as if a shadow" (Chronicles 29:15); that's pretty cool too.… (more)
11 more
LibraryThing member AMQS
What a lovely book. This book might have continued forgotten at the bottom of my teetering book pile if it hadn’t been for the American Author Challenge, when someone mentioned it, and wondered if I had it buried somewhere. It was a perfect time to read it, too, as we traveled to Quebec last summer and fell in love with it. I have decided that I love Willa Cather. What I love best about her writing are her beautiful descriptions of the landscapes. She describes the light, the colors, the nuances, and the changing seasons so vividly, so lovingly, the landscapes become omnipresent beings as integral to the story as the characters, and her characters interact with their environment with awe and reverence, and in this case, love.

Ms. Cather tells the story of a widowed apothecary who followed Count de Frontenac when he was sent to Quebec to serve as Governor General at the direction of French King Louis XIV. While M. Auclair misses his homeland, his 12 year-old daughter Cecile loves Quebec with her whole heart. The book follows Cecile over the course of the year 1697. I found the historical details fascinating – many colonists subsisting on frozen lard and smoked eels throughout the long winter; the more prepared colonists cultivating lettuce and other greens as long as possible in their basements; the markets selling specialties from each proprietor’s native region; the fervent adherence to familiar customs and religious practices at the very edge of wild country.

While I enjoyed the book, I felt that it had a very YA feel to it (not my favorite genre), although it made me really want to visit Quebec, where I've never been. I would recommend for fans of The Little House on the Prairie series who have grown up a bit.

3 stars… (more)
LibraryThing member auntmarge64
A gentle, delightful tale of life in 17th century Kebec (Quebec City), told primarily from the perspective of the apothecary's daughter, 12-year old Cécile Auclair, who cares for her father following her mother's death. Cécile is fascinated by stories from the many visitors to their shop, and she spends much of her time with a little boy whose mother, a local prostitute, pays scant attention to him. Religion and the lives of the saints, especially those from Canada, are of great interest to the people of Kebec, and in the pages of the book the reader is introduced to many of their histories and to other real-life figures, several of whom feature in the story. This was a real pleasure to read, and it would be wonderful for a break from whatever heavy reading one may be doing.… (more)
LibraryThing member mahallett
About colonial Quebec.
Fewer