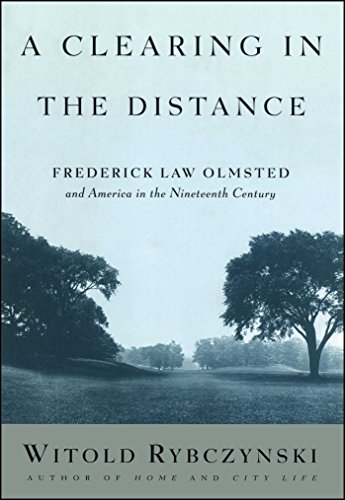 A clearing in the distance : Frederick Law Olmsted and America in the nineteenth century

"In a collaboration between writer and subject, the author of Home and City life illuminates Frederick Law Olmsted's role as a major cultural figure and a man at the epicenter of nineteenth-century American history." "We know Olmsted through the physical legacy of his stunning landscapes - among them, New York's Central Park, California's Stanford University campus, Boston's Back Bay Fens, Illinois's Riverside community, Asheville's Biltmore Estate, and Louisville's park system." "Olmsted's contemporaries knew a man of even more diverse talents. Born in 1822, he traveled to China on a merchant ship at the age of twenty-one. He cofounded The Nation magazine and was an early voice against slavery. He wrote books about the South and about his exploration of the Texas frontier. He managed California's largest gold mine and, during the Civil War, served as general secretary to the United States Sanitary Commission, the precursor of the Red Cross."--Jacket.… (more)

LibraryThing member jcbrunner
An excellent biography about a remarkable man. In his youth, Frederick Law Olmsted drifted from job to job as a seaman, merchant, journalist and farmer. Thanks to his well connected Connecticut family, he managed to combine his knowledge about English gardens, his farming and journalistic experience into designing New York's Central Park (together with an architectural partner). The rest is history: He became America's foremost landscape designer at a time when American cities were short of parks. Europe's cities transformed their razed medieval walls into green belts. American parks in contrast were set out along avenues of future expansions, a gamble that paid of handsomely.

Olmsted was a supreme networker, a mover and shaker more than a manager. Both his farm, his magazine as well as a goldmine he oversaw did not prosper under his direction. During the Civil War, he headed the Sanitary Commission which pressured the Federal Government to care better for its soldiers. Managing this fickle decentralized organization proved to be beyond his skills and he escaped from its management. In his landscape design family firm, he wisely restricted himself to designing and schmoozing which allowed for a smooth transition of this early professional services firm to his son who, conveniently for the brand, carried the same name and continued and expanded his legacy.

Rybczynski's biography is written with a love for both the man and his works, illustrated with plenty of maps and b/w photographs that makes one want to explore the parks he designed. The only flaw are the short fictionalized inserts. Rybczynski should stick to non-fiction. Highly recommended to anyone interested in urban planning or in the Renaissance men of the 19th century.… (more)
3 more
LibraryThing member Othemts
An excellent biography about a remarkable man. Olmsted carved out democracy from the landscape, and shaped the values of the American city. I learned a lot from this book.
LibraryThing member rakerman
The level of detail tends to distance the reader from Olmstead. The occasional use of fictional imaginings of Olmsted's thoughts during a day is probably intended to bring some humanization to the book, but is a dubious biographical technique.

I preferred Justin Martin's Genius of Place.
LibraryThing member mielniczuk
On the first walk through Boston's 'Emerald Necklace' I felt a strange sense of familiarty. An historical marker introduced me to Olmstead. Finding this title a few days later introduced me to the man responsible for parks I'd experienced in Montreal, New York, and Buffalo.

Rybczynski documents these contributions. He also shows how Olmstead combined his sense of nature and justice to create dramative public spaces that remain unequalled more than a century later.… (more)
Fewer