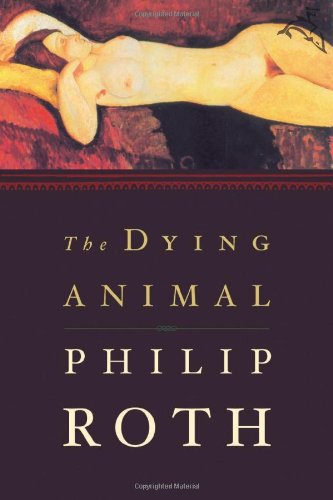 Swearing off the drag of married life during the heady days of the 1960s sexual revolution, David Kepesh left his wife and son, choosing instead to reinvent himeself in the extistential freedom of an "emancipated manhood." In his 60s, Kepesh conducts an ordered life in New York as a prominent professor and television culture critic. A man of undiluted sexual appetites, his minor celebrity delivers him a fresh new crop of nubile coeds every semester. And then he encounters Consuela. The daughter of wealthy Cuban émigrés, she is volumptuous and beautiful--and she becomes Kepesh's obsession.

New York Review of Books
The Dying Animal ends on a note of radical ambiguity and indeterminacy. What is rather unusual about it is the way it challenges the reader at every point to define and defend his own ethical position toward the issues raised by the story. It is a small, disturbing masterpiece.

LibraryThing member messpots
The protagonist is an almost ruined man â€” ruined presumably by the sixties, but more generally the victim of his own appetites. Roth paints him as loathsome: isolated, selfish, a prig. But he's redeemed by his relationship with a student. It happens slowly, and to the reader the pleasure is in watching it unfold.

In short: this is not a book about the fantasies of elderly men, neither the protagonist's nor Roth's. It does Roth an injustice to read it in that way.… (more)
14 more
LibraryThing member name99
I guess this is Philip Roth's usual fare, but it is rather too much "literature" for me --- a meditation on life, love, death and all that, without really going anywhere.
LibraryThing member brianinbuffalo
A revealing look at the Sexual Revolution through the eyes of an aging man. Philip Roth is among by favorite authors. "The Dying Animal" doesn't come close to the achieving the brilliant feats Roth accomplished in some of his other works, namely "The Plot Against America" and "American Pastoral." Still, it presents a graphic snapshot of how one intriguing character struggles with colliding emotions, passion and death. This thin tome (156 pages) is well worth the read.… (more)
LibraryThing member ragwaine
His best so far. Extremely cool and sexual. Plus Zuleika read it and we had long hours of talk afterward.
LibraryThing member dczapka
The Dying Animal is an unusual chapter in the progression of Roth's protagonish, Professor David Kepesh.

At first, the novel seems to be somewhat out of place with the other two books, adopting a voice that (presumably under the pretense of old age) is blunter and cruder than we might expect. Just as The Breast and The Professor of Desire end up becoming missives on topics far afield of sex and relationships, so too does this novel evolve, though amidst a far more sexualized backdrop than any of the others.

The tales and justifications of Kepesh's many "aesthetic" affairs are interlaced with the somewhat less-than-interesting saga of his relationship with Consuela Castillo, a story that only gains momentum as the novel reaches its end and the transformation occurs, revealing itself as a work far more interested in the concept of time, aging, and the inevitability of death.

It's not as tightly constructed as the other books, but it's fairly short and as readable as the others, and if you've enjoyed your first two forays into David Kepesh's world, it's doubtful you'll be wanting to miss the final installment.… (more)
LibraryThing member beentsy
I disliked this book. Particularly, I disliked the main character so much that I began to resent that I was using my time to read about him.
LibraryThing member jburlinson
One of the few (actually, I can only think of this one) examples of a novel written to dispute a poem. In this case, "Sailing to Byzantium", by W.B. Yeats. One of Roth's transgressive heroes (David Kepesh, from The Breast and The Professor of Desire), who represents the catastrophe of dedicating old age to "Monuments of unageing intellect".… (more)
LibraryThing member Luli81
I have to say I expected more. In the end I only could see an immature old man, who is dying to have more time to enjoy his life, he unable to face reality and has to hide his fears with relationships with young women. Dos he fall in love in the end?
LibraryThing member BALE
Readers who view Roth as a pervert obsessed with sex and young girls miss the point of this work. We are all sexual beings who, at some point in our lives, are forced to deal with our aging, diminishing bodies. Does this effect how we perceive ourselves sexually? Of course. In, The Dying Animal, Roth deals with this issue from two perspectives - that of the aging man contrasted and connected with that of a beautiful young woman faced with breast cancer and her pending mastectomy. The young woman is forced to confront the effect the chemotherapy and surgery will have on her sense of self as a sexual being. In the background, there is death. That is, the death of a friend dying too young, the death of relatives and how it affect our sense of security. In essence, life. Roth is a brilliant and perceptive writer. It is unfortunate to read one review after another on LT missing the true essence of this wonderful novella.… (more)
LibraryThing member slsmith101
Well.. what to say about this book. I read it because I enjoyed "Elegy", the movie which was based on it. While the movie followed the story line of the book, the book was much more introspective. We experience everything through the main charactor's mind, and it mostly deals with how he feels about getting old. It was a well written, short, fast read, but if it had been much longer I probably would not have finished it. I found the ending very unsatisfying - probably because I did not really understand it.… (more)
LibraryThing member agnesmack
Right after I finished this book I watched Elegy, which is a movie based on the book. I'd say you could skip the book and go straight to the DVD.

It's not that I didn't enjoy it. I just don't know that I would have enjoyed it if I didn't know as much about Roth's background as I do. Because you see, it was based directly on a situation in his life.

That situation is basically that he's an old man but he still loves the young ladies. He is a professor at a major university, sets his sites on a Cuban girl in his class and begins sleeping with her. Eventually he does weird things like lick blood off of her legs.

The book is a pretty self-indulgent undertaking. It is clearly just him trying to make sense of the affair and an attempt to discern why it affected him so much. I don't think he quite accomplishes that but I did end the book feeling like I'd gotten some useful insight into his own life and how it's affected a few of his other books.

Overall : I would not recommend this to anyone who is just starting out with Roth. In fact, I wouldn't even recommend it to a Roth fan who hadn't read both The Professor of Desire and The Breast.… (more)
LibraryThing member cshoughton
There's a lot of power in this story. At first I marvelled at the authors ability to weave the narrative so well. The next thing I knew I was doubled over bawling.

I suppose the book is at once a character study and a commentary on the evolution of western culture; both intermingle flawlessly. But mostly, it spoke to me of the inevitability of death. The main character ignores the reality and responsibility of his own mortal prison, but all that does is illuminate Consuela's story. It is in that light, her light, that we make out the shape of the animal that is David.

When was it that I too began to think of age in terms of how much time I had left, rather than how long I'd been alive?

I'd rate this five stars if it weren't for the nagging sense that the author had it in him to tighten up the narrative, pull out some of the historical musings, and focus the inner monologue. For whatever reason, he tied things up a little too loosely. Still, be careful. Don't ever underestimate Roth.… (more)
LibraryThing member Ameise1
What a gorgeous story. It's a true masterpiece from Philip Roth. David Kepesh (age 70) is reflecting on love life, sex and relationship. Starting with an addicted love affair with one of his students he is drifting in his memory to other relationships and is telling the reader what the past and the present has brought to his former lovers. He is also trying to help his son whom he has left in early age and to whom he never has been very close. On the one side Roth is writing like a kind of psychoanalyst and on the other hand there is a lot of wink and esprit.… (more)
LibraryThing member kylekatz
2001. David Kepesh is 62 when he has an affair with a 24-year-old student, Consuela Castillo. He sleeps with her for a year and a half then is depressed about losing her for three years thereafter. Eight years after their affair, she contacts him to tell him she has breast cancer. Her breasts were so enormously important in his erotic life, that he is quite devastated by the news that she will lose one. He is 70 by this time, but he seems likely to become hopelessly entangled with her again, but the book ends. The point seems to be that no man is immune to ridiculous behavior in love. He never even seems really in love with her, but he is obsessed with her. Interesting, but not great, perhaps over-intellectualized. He is not in the moment like Portnoy, but recalling the events and analyzing them trying to gain some understanding about them that eludes his grasp.… (more)
LibraryThing member Bricker
Imagine if a more cynical/urban/East Coast Henry Miller wrote a version of Tuesdays with Morrie
Fewer