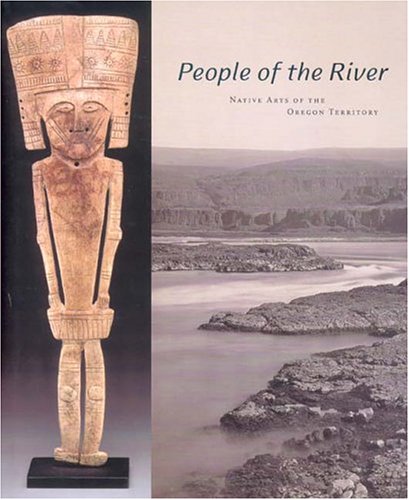 People of the river : native arts of the Oregon territory

People of the River is the first major publication to focus exclusively on the rich artistic traditions of the Native Americans who traditionally lived along the lower Columbia River from the mouth of the Snake River to the Pacific Ocean. In this richly illustrated volume, author Bill Mercer eloquently describes the Columbia River art style as an indigenous development that emerged over the course of countless generations and whose forms reveal a unique combination of designs, motifs, materials, and techniques. The book includes more than two hundred objects organized into sections that focus on sculptural forms, basketry, and beadwork spanning the pre-contact era to the middle of the twentieth century. People of the River features many objects that have never before been published and provides keen insight into a previously unrecognized area of Native American art. With insightful texts, lavish reproductions, and an extensive bibliography, People of the River promises to be a key resource on this compelling body of work for years to come. Bill Mercer is curator of Native American art at the Portland Art Museum, where he developed the extensive permanent installations that make up the museum's Center for Native American Art.… (more)

The Spirit Within: Northwest Coast Native Art from the John H. Hauberg Collection by Steven Brown
Looking north : art from the University of Alaska Museum by University of Alaska Museum.,
The Box of Daylight: Northwest Coast Indian Art by Bill Holm
1001 curious things : Ye Olde Curiosity Shop and Native American art by Kate C. Duncan
Trading Identities: The Souvenir in Native North American Art from the Northeast, 1700-1900 by Ruth B. Phillips
14 more
Understanding Northwest Coast Art: A Guide to Crests, Beings and Symbols by Cheryl Shearar
Looking at Indian art of the Northwest Coast by Hilary Stewart
S'abadeb = The gifts : Pacific Coast Salish arts and artists by Barbara Brotherton
Haida art by George F. MacDonald
The American Indian parfleche : a tradition of abstract painting by Gaylord Torrence
Painting in the North : Alaskan art in the Anchorage Museum of History and Art by Kesler Woodward
Nakian by Frank O'Hara
Hesse : a princely German collection by Penelope Hunter-Stiebel
Art of the American West: The Haub Family Collection at Tacoma Art Museum by Laura F. Fry
Native visions : evolution in northwest coast art from the eighteenth through the twentieth century by Steven C. Brown
Cedar : tree of life to the Northwest Coast Indians by Hilary Stewart
Northwest Coast Indian art : an analysis of form by Bill Holm
William Morris: Glass--Artifact and Art by Henry Geldzahler
From the land of the totem poles : the Northwest Coast Indian art collection at the American Museum of Natural History by Aldona Jonaitis
Fewer