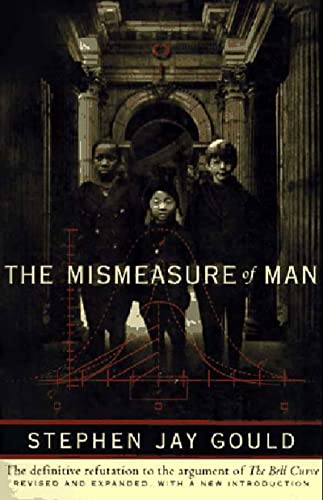 The mismeasure of man

When published in 1981, The Mismeasure of Man was immediately hailed as a masterwork, the ringing answer to those who would classify people, rank them according to their supposed genetic gifts and limits.And yet the idea of innate limits--of biology as destiny--dies hard, as witness the attention devoted tonbsp;The Bell Curve, whose arguments are here so effectively anticipated and thoroughly undermined by Stephen Jay Gould. In this edition Dr. Gould has written a substantial new introduction telling how and why he wrote the book and tracing the subsequent history of the controversy on innateness right through The Bell Curve. Further, he has added five essays on questions of The Bell Curve in particular and on race, racism, and biological determinism in general. These additions strengthen the book's claim to be, as Leo J. Kamin of Princeton University has said, "a major contribution toward deflating pseudo-biological 'explanations' of our present social woes."… (more)

LibraryThing member irisiris
One reason why I love science is that it's self-correcting; unfortunately, the corrections take centuries because cultural institutions profit from inventions like "irrational" women and "sub-primate" racial groups. Rest in peace, Stephen Jay Gould: a great writer who takes the reader by the hand through a difficult path.
12 more
LibraryThing member thcson
A great book about the history of pseudo-scientific ideas relating to innate intelligence, from cranial measurements to the Bell Curve. The author's main point with regard to modern IQ tests is that normal variation within a population and differences in average values between populations are two entirely separate phenomena. Attempts to rank races by any measure are therefore misguided. Along the way he convincingly exposes the fraudulent methods of intelligence research, showing that experts who tout their social agendas by appeal to "objective" numbers should be distrusted. I particularly liked the way this book weaves together biology, statistics, the history of science and social policy in an informative manner.… (more)
LibraryThing member Devil_llama
The author details the history of IQ testing and its weaknesses as a tool in deciding public policy. As always, the author writes with a witty, conversational style that makes the book accessible to non-scientists. Updated with a new forward to address the recently released book, The Bell Curve.
LibraryThing member snash
By using the various attempts through time of craniology and IQ testing to measure man, The Mismeasure of Man illustrates how science is a product of its times. Scientists often unconsciously collect and interpret data to fit their preconceived theory. Any hope of objectivity must first acknowledge this characteristic of man. The book shows this in a convincing readable manner.… (more)
LibraryThing member Daedalus
This should be mandatory reading. It's a combination of that good and that informative.
LibraryThing member lakesidequeen
This is one of my most recommended reads to folks doing psychological assessments. It tells you what they don't teach you in grad school!
Life changing!
LibraryThing member jeff.maynes
In this book, Gould is taking on a body of research broadly centered around the idea of an innate, heritable, quantifiable ability or disposition for general intelligence. The book is organized historically, as Gould looks through craniometric analyses (measuring intelligence via skull size), IQ tests, factor analysis and other steps in between.

In the introduction to this revised edition, Gould states that his hope is to bring his scientific training together with a historical interest. In this vein, he does not fully contextualize the research he is studying but instead looks back to the actual data and methods that this scientific work was built on. This is not to say that the book is historically naive. Far from it, Gould does a nice job tracing out real political consequences of the scientific work he discusses.

On one hand, this book is an effective demolition of arguments for the reification of intelligence, in its historic forms, and its modern revivals (e.g., "The Bell Curve"). Gould's grasp of tools for statistical analysis and their correct interpretation empowers him to show the fallacious reasoning underlying these arguments.

On the other, I think the real value in this book is what it illustrates about science. There are a few cases of fraud discussed here, but Gould notes that fraud is uninteresting. Sometimes they reveal that our standards for detecting fraud are inadequate, but fraud stands as an outlier in scientific practice. Our methods are designed to detect and punish it. What interests Gould far more is the way in which expectations and a priori beliefs can subtly and invisibly affect the scientific process itself. Gould ably illustrates through historical case the theory-laden nature of observation and reminds us of the care we must take to control for it. At the same time, we see how rigorous analysis of the methods and data can reveal these errors.

I use this book as a supplementary reading for courses which deal with the scientific method, and I highly recommend it for this use. It is also an engaging and interesting read for anyone interested in IQ (and its relatives) and its social implications.… (more)
LibraryThing member Paulagraph
I found the Introduction to the Revised and Expanded Edition: "Thoughts at Age Fifteen" to be perhaps the most useful section of the book. In it, in addition to recapitulating his aims and his primary claims (see below), Gould lays down guidelines for honest scholarly (especially scientific)work, in proposing that "the best form of objectivity lies in explicitly identifying preferences so that their influence can be recognized and countermanded."

"The Mismeasure of Man therefore focuses upon the analysis of great data sets in the history of biological determinism. This book is a chronicle of deep and instructive fallacies . . . in the origin and defense of the theory of unitary, linearly ranked, innate, and minimally alterable intelligence."

Gould debunks the strict heritability of intelligence as proposed by those such as the authors of The Bell Curve by claiming that "we commit a classic category mistake if we equate the causes of normal variations with the reasons for pathologies (just as we make a category error in arguing that because IQ has moderate heritability within groups, the causes for average differences between groups must be genetic . . .)."

On the one hand it disturbingly documents the history of "scientific" racism/prejudice re: temperament/intelligence/etc.

On the other hand it is frustratingly out of date, even as a historical source; pages and pages are used to 'disprove' e.g. craniology or the validity/goodness of forced sterilization which presumably no one believes in anymore, outside of some kooks who are not going to read this book.

On the other hand, the book doesn't address more recent research on the heritability of g (than the early 1900's!) or non-racial/racist dimensions of this (e.g. Gould leaves the unwary reader with the impression that all research on heritability is race/racism or class based.)

On the one hand a questioning of (some aspects of) g, heritability of g, evolutionary/social psychology/biology is given (this is the argument/question of the existence of modules/a multitude of evolved behaviors, for those who are at least somewhat familiar with these debates.)

On the other hand, Gould's answer is literally that the mind is like a general purpose computer (he uses this as an analogy at one point, but then also states twice that the mind is a 'general' thinking device, which is how it can so adaptably implement different cultures.) But this is problematic, to say the least, if there is no such thing as general intelligence.

All in all, a passionate argument against racism, including the (highly, highly likely to be) invalid claim that races are separable by intelligence/IQ/g/etc. But far from perfect and showing its age quite a bit.… (more)
LibraryThing member fdholt
In the updated version of The mismeasure of man, Stephen Jay Gould debunks race science, beginning with measurement of skulls and body types to IQ tests and finally to a discussion of The bell curve (which I must admit I have not read. As a Darwin scholar and professor, he uses the mathematics of factor analysis to show fallacies in each of the subjects along with many illustrations. He also defends the original intent of the Binet IQ test, which was to point out children that could be helped by teachers. All of Gould's conclusions are obvious - the scientist/sociologist/psychologist sees what he wants to see and comes to the conclusions that best fit his own world view. Gould himself believes the "out of Africa" theory that life began there since the genetic diversity is greatest on that continent. But he has the firm belief that there is no difference in intelligence between races, no one race superior or inferior.

Gould does not use footnotes to cite his works, but instead uses the scientific style of intext notes. Footnotes are for clarification or for additional material. There is an exhaustive bibliography and an excellent index. And, if your eyes glaze over in the mathematical sections, they can easily be skipped without losing the continuity of the book.

An important book on scientific racism and its roots which will be on reading lists for years to come.… (more)
LibraryThing member Stevil2001
Stephen Jay Gould takes on everyone who's ever tried to quantify human intelligence with a simple numerical value, be it measuring skull capacities or the Stanford-Binet "intelligence quotient." It's an illuminating look at how easy it is to blind yourself. It's a nuanced critique of objectivity from someone who (unlike many who critique objectivity) is sympathetic to the overall epistemology of science. As he states it, "I criticize the myth that science itself is an objective enterprise, done properly only when scientists can shuck the constraints of their culture and view the world as it really is" (53). His gist is that science will always be a culturally embedded enterprise, so rather than deny that fact, scientists should work to understand their biases, because, ideally, science can "be a powerful agent for questioning and even overturning the assumptions that nurture it" (55).

His discussion of Samuel George Morton, who measured over one thousand skulls in order to prove black mental inferiority, is fascinating (see pp. 83-104). Morton was an adherent to polygeny, the theory that the races of man have separate origins, which allows one to ethically endorse all sorts of racist practices. He fudged his analysis to prove his point, but could not have done so consciously, because he published his raw data along with his work, easily allowing anyone to discover the fudging. Whenever he miscalculated in favor of his own theories, he never double-checked, because he "knew" that he was right.

Gould shows how this kind of thing happens again and again-- but offers the promise that good science, well conducted, will root out this kind of bias, hopefully sooner rather than later. It's easy to laugh at some of the ridiculous judgments made in the name of "science"... until you realize that this kind of science has informed the slavery debate, immigration policy, school reform, and many other things with massively real consequences for real people. Hopefully we can console ourselves with the belief that most of these people probably would have been racists anyway (!); science was just a convenient crutch to lean on.… (more)
Fewer